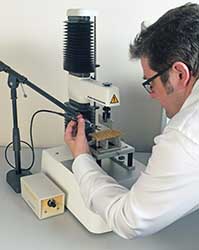 The sound a food makes when it is being consumed is an important sensory factor influencing consumer acceptance of a product. Much research has been conducted over the years on measuring the sound a food produces as it is being chewed and correlating it with results of sensory evaluation. The scientific study of food sounds essentially began in the early 1960s with work by Birger K. Drake, who was reportedly the first to deal seriously with measuring the sound of food, and continued with work by Zata Vickers and others in the late 1970s and early 1980s and work by Charles Spence and others in recent years.

Zata M. Vickers, Professor, Dept. of Food Science and Nutrition, University of Minnesota, conducted a series of research studies on the relationship of chewing sounds to crunchiness and crispness of foods. She demonstrated that crisper foods produce louder and higher-pitched sounds than less-crisp foods. She recorded the sound produced as the panelists bit into food and then played it back. She studied various placements of the microphone to determine the best location and found that she obtained the right balance of sounds when she pressed the microphone to the head just above the ear canal. As the front teeth bite food, she said, sound passes through the air, if the mouth is open, through the bone, which resonates and amplifies lower pitches, and through the soft tissue, which dampens the higher-pitched sounds.

Charles Spence, Professor, Dept. of Experimental Psychology, University of Oxford, has been conducting research on the influence of sound, color, shape, and other factors on consumers’ perceptions of foods. He has been using a variety of techniques in his research, including audio recording, human psychophysics, functional magnetic resonance imaging (fMRI), electroencephalography (EEG), and transcranial magnetic stimulation (TMS). He said that this exciting new area of research, which falls under the heading “neurogastronomy,” is changing the way scientists view the five senses and contributing important new insights to the understanding of the brain. The findings of this research have implications in many areas, he said, from the design of interfaces to improving the flavor of food.

Spence has researched how understanding multisensory perception can be used to improve people’s perception of foods. He and his coworkers have shown, for example, that panelists’ perception of the crispness of potato chips can be affected by modifying the sounds produced as they bite them and playing them back during the tests. They demonstrated that the perception of both the crispness and staleness was systematically altered by varying the loudness and/or frequency of the auditory feedback elicited during the biting action. The potato chips were perceived as being 15% crispier when either the overall sound level was increased or just the high-frequency sounds were amplified. This has implications for enhancing consumers’ eating experiences in restaurants. Many restaurants are so loud patrons can’t hear themselves think, he said, and this research implies that they probably can’t taste either.

Spence is now working in the area of food delivery devices, such as packaging, and the sounds they make. For example, Frito-Lay’s SunChips® biodegradable package made such a loud crinkling sound when handled even gently that the company withdrew it from the shelves. Spence also sees possibilities in enhancing the sound of food using technology and in developing new packaging that can enhance the consumer’s experience of a product. With regard to what’s ahead, he sees a huge explosion of interest in matching soundscapes and music to flavor and texture experiences.

Adding Sound to Texture Testing
The texture of foods has traditionally been instrumentally determined by measuring the force needed to compress a food until it fails (e.g., until a cracker breaks) and correlating the results with sensory evaluation. Recently, sound recording has been added to the instrumental testing. Marc Johnson, President, Texture Technologies Corp. (www.texturetechnologies.com), the North American distributor of instruments manufactured by Stable Micro Systems Ltd. (www.stablemicrosystems.com), said that Texture Technologies Corp. has worked on texture testing instruments and fixtures since 1988.

Johnson said that as food products such as breakfast cereals, potato chips, and extruded snack foods are crushed or penetrated by the instrument’s probes, the system quantifies the products’ force profile. Sharp drop-offs in force occur when the product’s structure fails. Sounds are also produced during the tests, and Stable Micro Systems developed a method of measuring the acoustic energy released. In 2002 the company added acoustic analysis capability to its workhorse instrument, the TA.XTplus Texture Analyzer, and a few years later added an extremely high-quality, calibrated microphone to create its Reference Acoustic Envelope Eetector (RAED), which captures sound in calibrated decibels and synchronizes it with traditional force-based instrumental measurements of texture. The RAED connects to the TA.XTplus, which then generates synchronized force and sound profiles.

Sound-profile curves often add additional metrics about a product’s crispy-crunchy behavior that cannot be easily picked up in the force profile, Johnson said. By analyzing sound simultaneously with forces, companies can very precisely quantify the behaviors they are designing into their products. The RAED has high sensitivity to the frequencies emitted by brittle products, he said, but low sensitivity to mechanical noise emitted by the texture analyzer itself. It includes a frequency filter that removes ambient vocal and machine noise from the acoustic signal and thus allows tests to be conducted even in relatively exposed environments, such as R&D lab benches. Recent improvements/enhancements to the texture analyzer, he added, have included use of improved electronics and filters, high-quality microphones, and high-definition cameras.

The company has conducted application studies on foods such as French fries and wheat crackers. Capturing tests on video, complete with sound, Johnson said, shows how test products fracture and can therefore be very useful in product development. The acoustic profiles can be used to evaluate new formulations and processes, ingredient substitutions, moisture-migration concerns, packaging quality, and shelf life. Johnson said that using consumer panels to evaluate products is expensive, so the system can be used to evaluate different treatments and formulations before moving on to consumer panels.

Putting Your Sensor Where Your Mouth Is
Most in vivo studies have utilized microphones placed near or against a panelist’s head to record the sound, but researchers at NIZO Food Research (www.nizo.com) have developed a system for measuring within the mouth the sounds a food makes as it rubs against the tongue and palate during consumption. This acoustic tribology (tribology is the science of friction and lubrication) can be used to help evaluate the sensory effects of food product formulations. The system uses a miniature microphone attached to a subject’s front teeth and connected to a computer to record the frequencies and amplitudes of the sound produced as a product rubs against the tongue or palate, providing objective information about the lubricating behavior of the food on the tongue. George A. van Aken, Senior Scientist, NIZO, said that the sound produced can be correlated with the vibrations of the tissue that are sensed by the mechanoreceptors in the tongue that signal the sensation of roughness.

The advantage of acoustic tribology, he said, is that it measures where the consumer experiences the food: in the mouth. A video presentation, complete with sound, demonstrating how the addition of cream to a cup of coffee increases the lubrication and thereby reduces the sounds produced as the tongue rubs against the palate is available at www.nizo.com/news/latest-news/67/van-aken. The technology is non-invasive, measures in real time, and can be applied without any preconditioning or preparation of the subjects.

Van Aken began the development as a project to determine how emulsified fat contributes to a creamy mouthfeel. He showed that the emulsion droplets bind to the oral mucosa, locally increasing the viscosity of naturally adherent surface layer and serving as a source of fat released from this mucosal layer. Both have the important effect of lubricating the contact of the tongue with the palate or other surfaces, such as the teeth or a piece of cheese, which is sensed as a certain degree of roughness or smoothness. Instruments called tribometers have been used to measure the lubricating ability of food materials to reduce friction, he said, but the surfaces used in the instruments, usually rubber or stainless steel, are much firmer than live tongue tissue and don’t have the same properties as the mucus-coated epithelial outer surfaces of the tongue that release dead cells; the surfaces are usually smooth whereas the tongue is covered by papillae; and only a constant force is measured whereas the mechanoreceptors in the tongue are known to be differentiated by type with specific responses (fast or slow) to mechanical stimuli.

The technology he developed demonstrated that the friction of skin and tongue surface against a substrate can be measured and quantified and that the acoustic signal generated directly reflects the differences in lubrication between products. He conducted many qualitative descriptive analysis tests and showed that the sensory attributes such as creamy, rough, and smooth are highly correlated with a combination of viscosity and fat content and that the same ordering of these sensory attributes is found in the acoustic signal. The technology can be used to study astringency, such as to determine how tannic compounds are related to loss of lubricity of the tongue or tooth surfaces, van Aken said. It can also be used for optimizing the creaminess, astringency, or dryness of products in the laboratory without requiring extensive panel testing. Moreover, it is sensitive to items consumed just prior to meals. For example, consumption of an acidic drink such as wine, juice, or soft drink or a fatty product such as soup or a fatty appetizer prior to consumption of a food product being investigated will precondition the tongue surface and change the perception of the food product, and this effect can be quantified. The technology has been used in research on such products as water, milk, yogurt, quark, cheese, coffee, creamer, tea, wine, vinegar, butter, margarine, peanut butter, banana, nuts, spritz cookies, biscuits, honey, and soft drinks. Further work being explored, van Aken said, is to place a very sensitive microphone outside the mouth to further validate the technique with sensory panel tests, identify differences among panelists, and investigate how people adapt their oral movements or saliva production to the sensation of roughness/smoothness.

NIZO’s development of the acoustic tribology technology was named one of four winners of the Institute of Food Technologists’ 2013 Food Expo Innovation Awards competition in June. All exhibitors at the 2013 Annual Meeting & Food Expo were invited to enter the competition, and the winners were chosen from among 60 entries by a panel of nine jurors from industry, academia, and government with broad expertise in research and product development, processing and packaging technology, and food safety. Judging criteria included degree of innovation, technical advancement, benefits to food manufacturers and consumers, and scientific merit. NIZO offers the technology in contract research projects for clients, van Aken said, but instrument manufacturers are welcome to contact him about commercializing the system.

“Acoustic Emission Measurement of Rubbing and Tapping Contacts of Skin and Tongue Surfaces in Relation to Tactile Perception,” by G.A. van Aken, in the June 2013 issue of Food Hydrocolloids

“Technology at the Dining Table,” by C. Spence and B. Piqueras-Fiszman, in the March 2013 issue of Flavour

“Auditory Contributions to Flavor Perception and Feeding Behavior,” by C. Spence, in the November 5, 2012, issue of Physiology and Behaviour

“Assessing the Role of Sound in the Perception of Food and Drink,” by M. Zampini and C. Spence, in the March 2010 issue of Chemosensory Perception

“Acoustic Emission, Fracture Behavior and Morphology of Dry Crispy Foods: A Discussion Article,” by H. Luyten and T. van Vliet, in the June 2006 issue of Journal of Texture Studies

“A Review of Acoustic Research for Studying the Sensory Perception of Crisp, Crunchy and Crackly Textures,” by L. Duizer, in the January 2001 issue of Trends in Food Science and Technology