Texture is a major determinant of food acceptance. Food companies use sensory evaluation panels to check the texture of their products for both product development and quality control purposes, but many companies supplement sensory evaluation with instrumental measurements. A number of companies around the world offer instruments for testing the texture of foods (see table below). Here, the three largest manufacturers of food texture testing instruments in the United States share what advances they have made in the instruments they offer and what challenges lie ahead.

Brookfield Engineering Inc.
Robert McGregor, General Manager, Global Marketing for High End Lab Instruments at Brookfield Engineering Inc. (www.brookfieldengineering.com), said that texture analyzers are simply machines that apply compression or tension to a test sample to simulate actions like squeezing a roll, biting into an apple, chewing a piece of meat, pulling apart a mozzarella stick, spooning yogurt out of a container, and so on. Brookfield’s CT3 Texture Analyzer is named for compression, tension, and the fact that it is the third generation of the LFRA instrument originally developed with the Leatherhead Food Research Association in the mid 1980s to measure the texture of gelatin. In standalone operation (i.e., without personal computer control), the CT3 can do most tests quickly and efficiently. The instrument features six test modes and a wide choice of accessories, making it ideal for quality control laboratories where rapid testing is essential. The fourth-generation instrument is already on the drawing board, McGregor said. 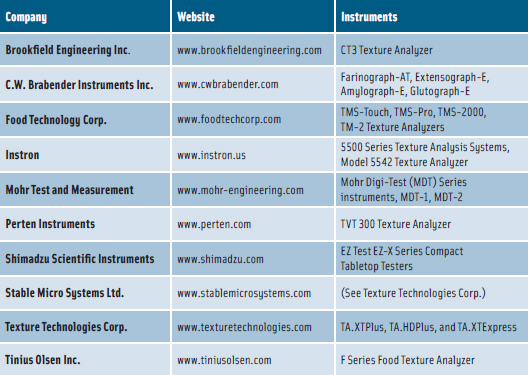 New developments typically relate to using the texture analyzer for a test that hasn’t been done before, he said. This may necessitate a new test probe or new fixture to hold and test the sample. New fixtures are being developed all the time. All that’s required is a customer who wants to test some item for which there may be no prior history, at least in the published literature, he added. For example, North Carolina State University’s food science laboratory is using a molar tooth in combination with the LFRA to simulate the action of teeth chewing a food item.

The major reason to use a texture analyzer, McGregor said, is to objectively quantify how a food item changes shape under certain conditions. Human sensory panels in food companies have traditionally been the way to determine the tenderness of meat or breaking strength of crackers, but they provide subjective judgments that can vary. The texture analyzer, in contrast, provides an objective measurement that allows comparison of samples against one another, using quantifiable numbers for force, distance, and time. The world of possible applications for texture analyzers is unlimited, he said, and making texture analyzers inexpensive to buy and easy to use is a major opportunity: The more affordable the instruments become, the more widespread their use will be.

Food Technology Corp.
Shirl C. Lakeway Jr., President, Food Technology Corp. (www.foodtechcorp.com), said that the company’s newest instrument is the TMS-Touch Texture Analyzer. Introduced in December 2010, it is based on the company’s bestselling TMS-Pro Texture Analyzer, introduced in 2003, but doesn’t require a separate computer for operation. Eliminating the need for a separate computer frees up valuable bench space in the laboratory, and incorporating touch-screen functionality allows users to select and perform tests by simply touching a picture in the application. The instrument is portable, offering users the flexibility of testing sites, whether in the laboratory, on the production floor, or at several locations. A simple software upgrade can provide the power and flexibility of the TMS-Pro. The company also offers other instruments, including the TMS-2000 Texture Analyzer, a research-grade, very-high-force Texture Profile Analysis measurement system.

As always, Lakeway said, the major challenge in testing food texture is to eliminate as many variables as possible that affect results. Things such as temperature, test sample size, and orientation and whether something has multiple parts/layers/skin have to be considered. Foods are biological products that are inherently variable, he said, so rigid procedures in test sample preparation are critical. While trained sensory panels can be very good at what they do, he said, there is always the subjective human element. The point is not to replace sensory testing but to supplement it with an objective measurement. One can’t control what isn’t measured, he said.

Manufacturers of texture analyzers must constantly adapt their methods and applications to provide information about their product that they deem most important or relevant to customer needs, Lakeway said. Often this involves being willing to custom-engineer testing methodology from the ground up to fit a processor’s specific request. Although there are many standard and proven fixtures and probes used for food texture measurements, the company is constantly being challenged to come up with new designs to satisfy its customers’ particular needs, he said, adding that that is part of the reason this field of work is so interesting and diverse.

Texture Technologies Corp.
Marc Johnson, President, Texture Technologies Corp. (www.texturetechnologies.com), said that as demands on food manufacturers have become more pressing, texture analysis instruments have become more sophisticated. They have evolved from instruments, such as penetrometers, that are designed to measure a single parameter to multifunctional instruments that can test many parameters on many different types of products. The company is the exclusive North American distributor of the Stable Micro Systems Ltd. (www.stablemicrosystems.com) family of texture analyzers. The TA.XTPlus, introduced in 2001, has been updated every year to provide extra functionalities. It is suitable for use on the factory floor as well as in the R&D laboratory.

The TA.HDPlus, introduced in 2003, has all of the features of the TA.XTPlus but is capable of much higher forces. Introduced in 2005, the TA.XTExpress can be run without software and is designed primarily for factory applications. The most recent advances have been enhancement of USB connectivity, additional connectors for simultaneously capturing temperature and humidity data, and connections for robotics and other devices.

Across the entire food industry, Johnson said, products are being introduced with very subtle, sophisticated mouthfeel, such as custard-type desserts, Greek yogurts, crunchier cereals, and other products with very different textures. The company designs its instruments to measure very subtle differences and introduces 30 new fixtures per year. Among Stable Micro Systems’ recent innovations, he said, are developments related to sound, video, and automation. For a few years now, the company has been able to capture sound and completely synchronize it with measurements of texture, such as crunchiness and crispiness. The TA.XTPlus can quantify the physical texture, resistance pattern, and sound pattern in calibrated decibels, so results obtained at one location are the same as those obtained at another. Synchronizing sound with texture measurement is a new, growing field, he said. Capturing tests on video shows how the product fractures and the mechanics of the test and can be very useful in the laboratory.

Companies and academic researchers want to better understand crispness and crunchiness, which are heavily influenced by fracture mechanics, Johnson said. Force and sound curves allow them to quantify the energy that is released during these events (e.g., as products are chewed or snapped). Video allows researchers to identify where and how the fracture patterns occur and relate them back to controllable product attributes, such as fineness of cell structure, coatings, thicknesses of certain layers, and so on, or manufacturing/packaging conditions. The instruments are also increasingly being automated so that the user can mount a dozen products and let the instrument run many tests unattended.

The company’s ambition, Johnson said, is to develop innovations in hardware to work with automation and in software to meet product developers’ needs. Food companies want to be able to use a single instrument to test a variety of different products rather than conduct the same test over and over and to do it without requiring extensive training. To meet these needs, the company’s software allows for incremental addition of products and methods.

Johnson said that the company works with food developers to help them understand what they want and to program the instrument to do it (i.e., to make complex things pushbutton simple). Analyzing how people interact with the instrument, how much time it takes to run a test, is massively more important than having a new fixture designed, for example, to cut three French fries instead of six.

The company’s approach is to start a conversation with the food developer early on, encouraging the food developer to think more broadly. In choosing a texture analyzer, Johnson said, food companies need to consider how they will be using the instrument in the future. If they’re interested in measuring the texture of a specific type of pasta such as spaghetti, for example, it is important for them to consider the flexibility of the instrument for testing other types of pasta as well. Similarly, a manufacturer of a nutrition bar containing cranberries may want an instrument to solve a problem with that specific bar but should also consider what the testing needs may be if a different ingredient is used in the future.

Texture Testing Methods
Various types of tests are used in the food industry to measure the texture of foods. In general, these instruments deform a sample—food or packaging material—under controlled conditions, measure the force as a function of time and displacement of a probe or other fixture, and correlate the results with the results of sensory tests.

Compression. In this test, a sample is placed on a flat surface and a platen is lowered into the sample until a desired force, displacement, or depth is reached. The test can be used to quantify the firmness of products such as tomatoes or the ability of baked items or jelly beans to be stacked without being squashed by the products above them. It can also be used to measure stickiness by compressing the sample, then reversing the movement of the platen.

Penetration or Puncture. In this test, a probe is inserted into a sample to a desired depth, and the peak force encountered is measured. There are many shapes and sizes of probes, such as rounded, blunt cones, and needles. For example, a 2-mm-diameter puncture probe may be used to evaluate the firmness of layered snacks such as Kit Kat bars. If the transitions between the filling and the crisp layers do not have sharp force peaks, then moisture may be migrating from the filling and lessening the crispness of the product. These sharp fracture peaks would not be discernible with larger puncture probes, such as 5- or 7-mm-diameter probes used to test fruit.

Shear. In this test, a fixture is used to cut a sample. There are many different fixtures, including straight blades, V-shaped blades, rounded blades, and wires.

Extrusion. In forward extrusion, the test sample is placed into a container and forced through an orifice or grid, and the resistance to flow is measured. In back extrusion, the sample is placed into a cylinder, and a piston smaller in diameter than the cylinder is forced into the sample. The resistance as the product flows up around the piston is measured.

Tension. In this test, a sample is pulled apart by jaws until it breaks. It can be used to measure the elasticity of products as well as the strength and cohesiveness of products such as cheeses and restructured meats. Doughs are evaluated with tensile tests since a dough’s leavening capability must be balanced with the dough’s strength to achieve the optimal product volume.

Breaking or Bending. In this test, a sample is supported by two fulcrums and a third fulcrum comes down to apply force until the sample bends or breaks. This is a common test for cookies, crackers, carrots, and extruded snacks.