Ultraviolet (UV) radiation is a portion of the electromagnetic spectrum falling between 200 nanometers (nm) and 400 nm in wavelength. For comparison, visible light is between 400 nm and 700 nm, running from violet to red, hence the names for radiation at either end—ultraviolet (beyond violet) and infrared (beyond red). The optimal germicidal action of UV is around 254 nm, which happens to be where mercury vapor lamps emit.

UV is thought to kill by interacting with DNA in living cells’ nuclei, preventing reproduction. It has no significant effect on dead tissues, such as foods, or on packaging materials. However, UV is absorbed by many substances and so cannot penetrate opaque or cloudy materials. It does work well on water and clear juices.

A typical UV application uses a mercury or mercury amalgam vapor lamp inside a quartz sleeve. This in turn may be enclosed in a stainless steel tube through which a fluid, such as water, may flow. The number and size of lamps and tubes is determined by the required dose.

The conventional way to express dose of UV radiation is in milliJoules (mJ) per square centimeter (cm2). A joule is one watt – second. Watt is an expression of power or energy per unit time, such as 3.4 BTU/hr. A typical value for disinfection of water (4 log cycles) is 400 mJ/cm2.

As described more fully in a related article that begins on page 68 (Koutchma & Barnes, 2013), UV exposure can significantly extend the shelf life of milk, so long as it is protected against further contamination, packaged under clean conditions, and distributed refrigerated.

Some suppliers of UV equipment include Wyckomar UV Purification Systems, Guelph, Ontario, Canada (www.wyckomaruv.com), SteriBeam Systems GmbH, Kehl-Kork, Germany (www.steribeam.com), and American Ultraviolet Company, Lebanon, Ind. (www.americanultraviolet.com). Most such firms offer systems for both home and industrial treatment of water. Some also offer equipment for treatment of air and for curing of certain polymers by promoting cross-linking from exposure to UV.

Treating Packaging Materials
An application in which poor penetration is irrelevant is the disinfection of packaging materials, such as films or trays. In one case, where hot filling was attempted but experienced challenges, UV was installed to sanitize the plastic trays while the contents were thermally sterilized. So long as the contents remained hot, they were safe from recontamination, but need not be relied upon to sterilize the container, as in conventional hot filling. After lidding with film, the packages were briefly heated from outside to sterilize the lid. This scheme might have wider application.

UV lamps decline in power over time, so need to be slightly oversized at first and monitored to ensure adequate dosing.

There can be concern about release of mercury if a lamp breaks, which is why they need to be enclosed for protection. According to Alex Wekhof, General Manager of SteriBeam, amalgam lamps present less of a potential hazard because amalgam solidifies upon release if a lamp is broken.

Another common application of UV lamps is to sterilize the headspace of syrup storage tanks. If condensation forms on the inside of syrup storage tanks and drips into the viscous syrup, pools of diluted sweetener can form in which mold or yeast may grow. (The low water activity of full strength syrup normally prevents growth of contaminating microbes.) UV lamps shining on the syrup surface can reduce this source of potential contamination. An alternate approach is to use a blanket of sterile air.

Pulsed Light
Pulsing very bright light provides a way of exposing surfaces to very high levels of energy that can have a sterilizing effect. Typically the lamps used are filled with Xenon and are powered by discharging an electrical capacitor. The spectrum of emitted light is broad, including some UV, but peaking at around 400 nm and including some visible light.

There are cases, such as with high fat or high protein foods, in which UV radiation may cause some negative effects, so a Xenon lamp may have a UV filter. Pulsed lights are more expensive than relatively simple UV lamps because of the electronics required to generate and control the pulses. 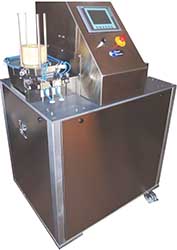 Pulse rates are typically 1–4 Hertz (Hz) or cycles per second. In an extreme application, SteriBeam tested pulsed light, including its UV, against spores of Bacillus pumilus, an organism that was found to survive the conditions of outer space. They delivered 10,000–13,000 mJ/cm2 to achieve 5–6 log reduction in 100 mL transparent polyethylene bags of water. The capital investment is high, but there probably is not another technique that could achieve the same results in a continuous line.

Ortega-Rivas (2013) reports that pulsed light has extended the shelf life of baked goods, shrimp, meat, and fish without impacting sensory attributes. Microbial reductions were typically 2–4 log, and rough surfaces are more difficult because of shadowing, but even such reductions can be effective in postponing spoilage. He also speculates that pulsed light could replace hydrogen peroxide sterilization of composite paperboard packaging material used in many aseptic packaging operations because residues of hydrogen peroxide are undesirable in many foods. Careful rinsing with sterile water and drying may often be adequate and less expensive than pulsed light. Aside from SteriBeam, it is not clear if there are commercial pulsed light systems targeted to the food industry.

How to Validate Sterilization Processes
With UV, pulsed light, or any other process, there is a need to validate performance. At first this is done in the lab, on a small scale, usually using surrogate microbes, for the sake of safety and to avoid introducing pathogens to the lab or plant. However, at some point, real pathogens in real systems need to be tested and understood. No one wants to deliberately introduce pathogens into a working plant, so such research is normally done in a special bio-containment facility.

Bio-containment facilities are rated according to their design, and precautions taken to avoid contamination of people and the environment. At the highest level, for working on organisms for which there may be no known remedy, occupants wear hazardous material suits (HazMat) and breathing apparatus. All exhausts are incinerated. 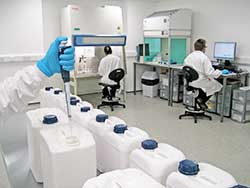 At less severe levels of containment, worker protection may be less cumbersome, but exhausts are still treated, access is limited, and appropriate precautions are employed. There are relatively few such facilities in the world, and even fewer that are focused on food. One example is at Leatherhead Food Research in England. The Pathogen Pilot Plant, known as the Dirty Lab, allows the research center to perform microbiological testing in a situation that replicates the factory environment, according to Helen Payne, Senior Food Safety Advisor.

Challenge studies ask the question, “Does organism X grow (or survive) in food Y?” The organism X must be added to food in sufficient quantity that survivors after a given time or treatment can be measured and a finite reduction rate established. Naturally occurring populations are usually too low to provide measurable reduction rates.

Leatherhead can draw from its own culture collection or from cultures isolated from products of interest. Typical pathogens include Salmonella species, E. coli, and Clostridium botulinum. Both complex processes and sanitation regimens can be challenged and validated. Products can be produced and then stored under controlled temperatures and humidity to determine shelf life.

One study being conducted in Leatherhead’s Dirty Lab is of the heat resistance and survival of pathogens in low-moisture foods, such as nuts, seeds, powder ingredients, and flavors. They have found that strains of Salmonella survive in paprika at low temperatures but slowly die out at ambient levels. Leatherhead planned to study the survival of Salmonellae and Cronobacter sakazakii in dry infant formula. They are able to use a large heated mixer in such studies.

Validating UV or pulsed light systems with real pathogens, real foods, and commercial-scale equipment would significantly enhance confidence in the design and operation of such systems. As previously mentioned, lamps decline in power with use and as they become stained from exposure to foods, so determining the rates of such decline would help in predictive maintenance.

UV and pulsed light are probably underutilized as preservation technologies and have significant potential, especially for sterilizing packaging materials, replacing chemicals whose residues are unwelcome. One could argue that UV and pulsed light are greener or more sustainable technologies because they do not rely on chemicals, but, of course, they do use energy, and, in the case of conventional UV, mercury.