Three-dimensional printing (3D printing) is a technology for generating three-dimensional objects from digital information. Another more accurate descriptor is additive manufacturing or additive processing because it depends on adding materials to build the object being printed. Developed originally during the 1980s as stereo-lithography by the late Chuck Hull, 3D printing was refined in 1989 by Jon Hirschtick, founder of Onshape (www.onshape.com) and SolidWorks (www.solidworks.com). (Hirschtick, a graduate of the Massachusetts Institute of Technology (MIT), was a member of the legendary MIT blackjack team depicted in the movie 21 and allegedly used his winnings to found Onshape.) Scott Crump, co-founder of Stratasys Ltd. (www.stratasys.com), commercialized fused deposition modeling, a next generation 3D printing technology. Several decades ago computer-aided design (CAD) and machining were the primary methods to produce three-dimensional objects, but modern 3D printing has evolved into what could be a multibillion dollar industry that promises to completely alter the world of design and development. 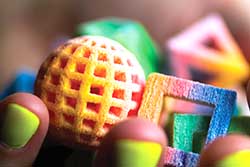 Principles of 3D Printing
3D printing is a process in which three-dimensional objects are produced by sequential layering of flat materials. The design is rendered in CAD or scanned in three dimensions from an original model or object. The scan is translated into a 3D printable format, such as an STL file, and the printer forms successive shaped layers of fluid plastic, ceramic, or metal to build up a series of cross sections of material. The cross sections are fused by heat, drying, or solidification as from cooling of extruded thermoplastic. Virtually any geometric shape can be built using this technology. Additive manufacturing is relatively slow—about one inch of thickness per hour, which can mean hours to even days for printing; in addition, the process still suffers from errors in construction. A 50% failure rate in low-end 3D printing is not uncommon, but 5% failures in high-end units is more usual. Further, excess materials may have to be removed from the object by scraping, polishing, brushing, etc., which presents another challenge for manufacturers.

Printer resolution is determined by layer thickness and x-y resolution. Typical layer thickness is 100 mcm with some of the newer machines capable of getting down to 16 mcm. According to experts, x-y resolution is comparable to laser printing. Layers can be produced from thermoplastics such as high-density polyethylene, acrylonitrile butadiene styrene, polycarbonate, and polylactic acid by extrusion of the melt through a narrow nozzle. Much 3D fabrication equipment employs a filament of the polymer, which is unwound from a reel and melted to a thin layer laydown driven by a computer-aided manufacture algorithm. The thermoplastic then solidifies one layer at a time by temperature reduction. The relative simplicity of this technology with thermoplastic filaments permits desktop 3D printers that can be purchased for as little as $1,000.

3D printing is not confined to thermoplastic materials. In direct metal sintering, for example, metal powder is fused into a three-dimensional object by melting with a laser beam, a relatively expensive process. Michigan Technological University has developed an open-source 3D metal printer that uses a gas-metal arc welder to lay down thin layers of steel. Granular materials such as sintered metal, powders, or metal alloys can also be applied with relatively little heat.

Other materials that might be created with 3D printers are extrudable foods such as confections and dough, but this is a slow and still expensive proposition for food manufacturers. The U.S. National Aeronautics and Space Administration has a grant to develop a 3D printer capable of creating a nutritious and flavorful food for astronauts, and pizza is the initial target. Whether or not pepperoni will be involved remains to be seen, but some postulate that one day in the distant future grocers might be able to produce specialty foods by using 3D printing. 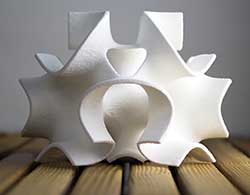 3D printing is automatic: operator oversight is not required. 3D printing is universal, applicable across all geometries, and repetitive, and it produces nearly perfect objects. No extra tools or tooling or manual action such as drilling or scraping is required. The process definitely accelerates the product development process by delivering precise prototypes that can be engineered and fitted for functionality. Prototyping of bottles, cups, trays, bowls, closures, etc. no longer requires a long time or tedious manual modeling or similar process from a block of plastic or wood. Complex new designs are possible with sequential refining to a perfect end product that can be converted into an injection or extrusion plastic production mold. 3D printing is not yet suitable for large pieces, but experts expect that larger surface areas may be produced in the not-too-distant future. Eventually, 3D printing may become sufficiently rapid to become a production tool.

In addition, ink jet 3D printing has been proven feasible by spreading the layers repetitively in the cross section. Bonding of the layers may be improved by incorporation of wax or thermoplastics. Photopolymers may also be incorporated by ink jet layering with each layer cured by ultraviolet radiation. Ink jet printing is regarded as more precise than other techniques for layering.

Additional Applications
3D printing is a means of mass customization, which can be achieved by applying multiple heads on a single machine. Many of the incredible applications for 3D printing have been in the biomedical field, such as the production of custom surrogates for human organs from tissue-like materials. In fact, reports indicate that 3D printing has been used to replicate a human jaw implant or a human ear, fabricated from micro-droplets of human stem cells. Some have predicted the possibility of reproducing the human hearing channels, thus obviating the need for hearing aids.

Today, 3D printing appears to focus on rapid prototyping and production of three-dimensional objects such as replacement parts for machines, buildings, gadgets, etc. The technology is obviously quite suitable for design, development, and even manufacture of singular shapes of packages in the family of bottles, trays, bowls, cups, etc., but not yet multiples. Some three-dimensional effects on packaging surfaces involve the application of diffraction devices and in-line molding, but these are expensive and thus limited to special events or high-end personal care packages. With 3D printing, the three-dimensional effects can be built onto a package’s surface. For example, an oil or acrylic painting or a photograph can be scanned for its surface effects such as brush strokes along with perfect reproduction of artist’s colors, tones, and impacts and converted into a high-resolution reproduction that becomes the package surface. Apprintus (www.apprintus.com) has developed a means of scanning and 3D printing of original art with full texture. Contemporary wine labels often attempt to capture the richness of classical art in two dimensions. With 3D printing, the essential features of the original art are reproduced to attract consumers via shelf displays and wine cellars. While wine labels might be targeting high-end applications, the very concept of offering these visual and tactile effects should intrigue marketing managers for other food products.

Although stereographic design appears to be the initial food package application, consider that functional materials may be selectively introduced to enhance the properties of the package. Envision, for example, the addition of oxygen barrier materials to corners of thermo-formed trays or cups to convert a package into a complete oxygen barrier. The possibilities could be endless.