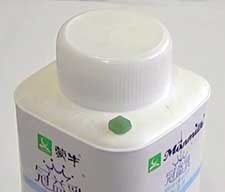 Color-changing tag may signal foods’ freshness
A color-changing “smart” tag on food packaging could tell consumers whether a carton of milk has turned sour or a can of green beans has spoiled without opening the containers, according to researchers at the recent 247th National Meeting & Exposition of the American Chemical Society. “This tag, which has a gel-like consistency, is really inexpensive and safe, and can be widely programmed to mimic almost all ambient-temperature deterioration processes in foods,” said Chao Zhang, Ph.D., the lead researcher of the study. Use of the tags could potentially solve the problem of knowing how fresh packaged, perishable foods remain over time, he added. And a real advantage, Zhang said, is that even when manufacturers, retailers, and consumers do not know if the food has been unduly exposed to higher temperatures, which could cause unexpected spoilage, “the tag still gives a reliable indication of the quality of the product.”

The tags, which are about the size of a kernel of corn, would appear in various color codes on packaging. “In our configuration, red or reddish orange would mean fresh,” explained Zhang, who is at Peking University in Beijing, China. “Over time, the tag changes its color to orange, yellow, and later green, which indicates the food is spoiled.” The colors signify a range between 100% fresh and 100% spoiled. For example, if the label says that the product should remain fresh for 14 days under refrigeration, but the tag is now orange, it means that the product is only roughly half as fresh. In that case, the consumer would know the product is edible for only another seven days if kept refrigerated, he explained.

The researchers developed and tested the tags using E. coli in milk as a reference model. “We successfully synchronized at multiple temperatures the chemical evolution process in the smart tag with microbial growth processes in the milk,” noted Zhang. The tags could also be customized for a variety of other foods and beverages.

The tags contain tiny metallic nanorods that, at different stages and phases, can have a variety of colors: red, orange, yellow, green, blue, and violet, Zhang explained. “The gold nanorods we used are inherently red, which dictates the initial tag color,” he said. “Silver chloride and vitamin C are also in the tags, reacting slowly and controllably. Over time, the metallic silver gradually deposits on each gold nanorod, forming a silver shell layer. That changes the particle’s chemical composition and shape, so the tag color now would be different. Therefore, as the silver layer thickens over time, the tag color evolves from the initial red to orange, yellow, and green, and even blue and violet.”

Although the nanorods are made of gold and silver, a tag would still be very inexpensive, and all the chemicals in the tiny tag cost much less than one cent—$0.002. “In addition, all of the reagents in the tags are nontoxic, and some of them [such as vitamin C, acetic acid, lactic acid, and agar] are even edible,” he explained.

A video illustrating how the tag works is available at http://www.youtube.com/watch?v=y-Fpj9bdht4.

Beneficial gut bacteria feast on dark chocolate
Researchers at the recent 247th National Meeting & Exposition of the American Chemical Society reported that certain bacteria in the gut gobble dark chocolate and ferment it into anti-inflammatory compounds that are good for the heart. “We found that there are two kinds of microbes in the gut: the ‘good’ ones and the ‘bad’ ones,” explained Maria Moore, an undergraduate student and one of the study’s researchers. “The good microbes, such as Bifidobacterium and lactic acid bacteria, feast on chocolate,” she said. “When you eat dark chocolate, they grow and ferment it, producing compounds that are anti-inflammatory.” The other bacteria in the gut are associated with inflammation and can cause gas, bloating, diarrhea, and constipation. These include some Clostridia and some E. coli.

“When these compounds are absorbed by the body, they lessen the inflammation of cardiovascular tissue, reducing the long-term risk of stroke,” said John Finley, Ph.D., who led the work. He said that this study is the first to look at the effects of dark chocolate on the various types of bacteria in the stomach. The researchers are with Louisiana State University.

The team tested three cocoa powders using a model digestive tract, comprised of a series of modified test tubes, to simulate normal digestion. They then subjected the non-digestible materials to anaerobic fermentation using human fecal bacteria, according to Finley.