January 1, 2014
Share +
The 21st century in food is marked by a significant surge in the direction of closer to fresh, nearer to source, a greater desire for natural, and a paucity of processing. Interestingly, Americans have shifted from on-the-farm food sourcing and factory technologies for safety and quality to a new era in which minimal processing has emerged as a preference for a sizeable segment of the population. This series of trends has spawned contradictory surges toward processes such as ultra-high pressure processing, which only minimally alters the food product being preserved but is one of the more complex food processes ever engineered; the retort pouch—60 years in the making—which applies minimal thermal energy but must be regarded as a very special technology system to deliver high quality safe food products; and the offspring of retorting, microwave pasteurization and sterilization, two of the several techniques that reduce heat inputs to flutters to achieve the objective.


The technologies that are truly mind-disturbing are modified and controlled atmosphere (MAP and CAP), which are so far under the visible spectrum that very few citizens are able to even recite the words much less identify them among their dietary choices. How many members of the food profession populace would be bold enough to claim that MAP, CAP, and reduced oxygen preserve more volume of  food than canning, freezing, dehydration, aseptic packaging, or most of the other highly publicized food technologies? The list grows: almost all fresh red meat in vacuum barrier packaging, fresh cut vegetables, apples, pears, berry shipments, shelf-ready fresh red meat, and vacuum-packaged cured meats. Food refrigeration is today being complemented by altered atmospheric environments to prolong the safe quality of fresh and minimally processed foods. And in recent months, a very active movement in the basic science has been applied on a commercial scale to open new means of extending chilled shelf life. With more consumers perceiving refrigerated foods as better, any quiet technologies that enhance the preservation should be welcome. Thus, the re-entry of controlled atmosphere is the next major progression in offering more shelf life to distribution channels and consumers. 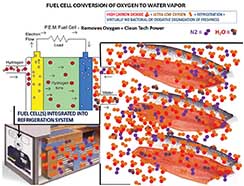 Temperature Control
What are these core controlled-atmosphere technologies? The root lies in controlling temperature of the product and not just the condenser discharge air temperature or the surrounding atmosphere. Temperature of the entire product mass (e.g., meat, ground meat, poultry, seafood, vegetable, etc.) must be at a constant level below the 0°C freezing point of pure water. As should be axiomatic among food and food packaging scientists and technologists, due to the presence of solutes, freezing temperatures of all food commodities and products are well below 0°C. Some items can be maintained at temperatures as low as -5°C with no measurable solid ice. Arrenhius physics predicts that a reduction in the temperature of food results in an exponential reduction in the rate of biochemical and enzymatic reactions and growth of microorganisms. For every 10°C elevation in total mass temperature of food, reaction/growth rates double. Thus, for example, if the published regulation temperature of 5°C is maintained, the rate of deterioration of food will be 1.5 times the rate at the effective freezing point.

Added to the constant-state temperature is the time required to reduce the food mass temperature from ambient, cook, or respiration temperature, ranging from minutes to hours and even days, depending on the technology being applied. The result is that even by following regulatory guidelines of reducing temperatures within specific times, deteriorative reactions take place at finite rates. The conclusion is that controlled atmosphere begins with controlled temperature. When the temperature of the entire food mass is rapidly reduced to the freezing point and maintained at this level, a major hurdle is overcome. Without this indispensable step, chilled shelf life is severely compromised.

Food Respiration
Virtually all fresh foods and most minimally processed foods undergo respiration in which the carbohydrate fraction consumes oxygen and produces carbon dioxide, water, and thermal energy. Even if the food product has been previously heated to destroy enzymes, the residual biochemical activity is an aerobic reaction. The assertion that the carbohydrate is the sole reactant is erroneous because the breakdown of protein results in carbohydrate fractions that enter the aerobic respiration cycle. And, of course, unsaturated lipids are subject to oxidative reactions. All such reactions must follow the temperature dependency cited above.

According to mass action laws, the greater the quantity of oxygen, the more rapid is the reaction, and according to mass action kinetics, the greater the quantity of carbon dioxide, the slower the reaction. The complement to this thesis is that the greater the amount of water present, the slower the respiration, which is a pleasant result since the more water present, the lower the rate of water loss from the food mass. So the concept of controlled atmosphere emerges: reducing the oxygen level lowers the enzymatic and biochemical respiration rates of food and the growth rates of indigenous aerobic microbial populations, which translates into extended shelf life at any given temperature. And removal of respiratory heat also reduces reaction rate. If these fundamentals are not sufficient, the rate of solubility of environmental gases enters: the higher the quantity of carbon dioxide dissolved in the aqueous fraction of the food, the greater the driving force for suppressing the rate of respiration. As the temperature decreases, the solubility of carbon dioxide increases, which constitutes another powerful incentive for reducing and maintaining the food temperature at or near the freezing point.

All of this refers to the controlled atmosphere process, which applies largely to warehouse storage of apples and other fruit. In such situations, the environmental conditions relative to the respiring food is carefully controlled to optimize shelf life. Relatively few institutional or consumer packaged-food products have been under controlled atmosphere conditions in distribution. But times are changing. 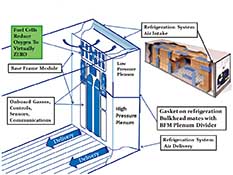 For many years, critics have suggested that controlled atmosphere preservation and packaging are insufficient because they are rarely, if ever, totally controlled. Thus, environmental conditions within and surrounding the food are significantly suboptimal. The result is weak shelf life extension. Recognizing that control is often less than ideal, Bell addressed the deficiency by constructing a system that first controlled the temperature in distribution to the freezing point of the contained respiring food, reducing the oxygen level to near zero and adding virtually 100% carbon dioxide into the environment. The result has been the extension of chilled shelf life to more than 40 days for fresh fish fillets, about 10 times the conventional chilled shelf life in air. His research results project the chilled shelf life of products such as prepared foods to 100 days.

The most recent implementation of the science has been in sealed shipboard containers for which temperature can be mechanically controlled to plus or minus 1°C by using forced chilled air circulating throughout the container. The critical gas concentration variable is controlled by fuel cells that consume virtually all the oxygen within the chamber, producing water external to the container. To initiate the process, the air in the chamber is vacuumed out as much as possible, and 100% carbon dioxide is injected. Meanwhile, the fuel cells remove residual oxygen and continue to remove any oxygen throughout the distribution journey. As a result, less than 100 parts per million of oxygen is present in the internal atmosphere with nearly 100% carbon dioxide.

Anaerobic pathogenic microbial growth is avoided by maintaining the temperature below 3°C. If the temperature rises above the minimum growth temperature for pathogenic anaerobes, alarms signal and valves automatically open to admit air. The shipment will perhaps spoil aerobically but food safety is not compromised.

The Future
The chronology of controlled atmosphere food preservation is written in a continuous flow of demanding challenges, especially the potential for microbial pathogens. Tight temperature control not only better retains quality but also restrains pathogenic microorganisms. And therein lies the major foundation of all food preservation: temperature, through which the effects of oxygen and carbon dioxide may be appreciated. Although this explanation focuses on large distribution vehicles and does not mention the ability to apply to display cases, with an added dimension, the residual gas in food mass can result in extended chilled shelf life in ambient air. When it comes to the contemporary application of control of the environment in which foods are maintained to better achieve safety, quality, and economy for food delivery, a new era in food systems and packaging technology has been successfully launched.