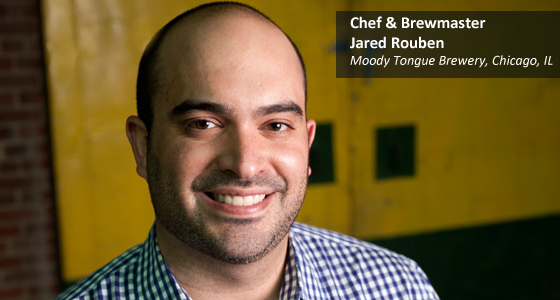 A graduate of the Culinary Institute of America, Jared Rouben has worked both kitchen and service positions in Michelin-starred restaurants in Chicago, Ill. A passion for beer brought him to brewing school, then to Rock Bottom Brewery, and finally to Goose Island’s Clybourn brewpub, where he made his mark creating beers with more than 50 chefs and farmers from nearby Green City Market. Now, Rouben’s new project, Moody Tongue Brewing Co., will emphasize what he calls “culinary brewing.” Moody Tongue employs classical cooking methodologies and techniques to incorporate ingredients into beer aside from malt, yeast, hops, and water.

Kelly Hensel: You have a degree from the Culinary Institute of America (CIA). Where did your interest in brewing come from?

Jared Rouben: When I first got to the CIA, I was so excited and wanted to join every club. The first one I tried to join was the wine club, but they said I had to have a minimum GPA and that each event would cost $20–25. I was just a culinary student, so I didn’t have any money. Also, I had been there for three days and I didn’t have a grade yet, so I couldn’t meet their minimum GPA requirement.

And I said to myself, wait a second, this is ridiculous. It shouldn’t be this difficult to learn how to taste wine. So I decided to join the beer club, but there wasn’t a beer club. So I started a beer club the next day. The first point of order was that there was no GPA requirement because this is culinary school, not Harvard. And secondly, we only charged $1 for every single event. I was the president of the beer club for my entire time at CIA, and the cost and GPA didn’t change. Because of that, we attracted about a 150 students to each one of our tasting events.

Hensel: After you graduated, did you work in some kitchens as a chef?

Rouben: Yes, I worked at the Martini House which is a Michelin star restaurant in Napa Valley. As far as exploring beer, when I was out in Napa the produce you would find there was absolutely incredible. You’d slice open a tomato and it looked like a fireworks display. The wine is beautiful, the beer is fantastic, and the food is incredible. But I have to tell you—and this was a Michelin star restaurant—at the end of our shifts, we were having beers. We weren’t having Chardonnay or having sparkling wine. These are chefs. These are taste makers. And I said to myself, wait a second, if the people that are creating these wonderful dishes are finishing off their evening with beer, there must be something there.

Beer deserves a place on these menus. For a very long time you would have maybe three or four options for beer on a menu. And two of those four were major companies and the other two were almost random. Guest and diners wanted more options.

Hensel: At what point did you decide to make the switch from chef to brewmaster for your career?

Rouben: I have to be honest with you—I never saw myself really changing. I look at brewing as cooking, and cooking as brewing. When I was learning how to brew, I always used the vocabulary of the kitchen. So, for example, if I was describing hops, I would think of different fruit profiles like mango for Galaxy hops and grapefruit for Cascade hops. Or when I was thinking of malt, I would think of different breads, such as biscuits, rye, and sourdough. This allowed me to build my brewing recipes and enabled me to communicate better, because food is something we can all relate to. 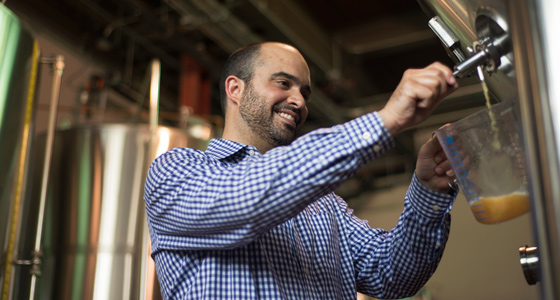 Hensel: What skills do you bring to brewing as a trained chef that other brewers may not have?

Rouben: I can’t speak for what other brewers have and don’t have, but I can tell you what’s really benefited me. First is sourcing—knowing where to get my ingredients. For example, knowing which farmer grows the best strawberries for a certain style of beer. Or, which farmer grows pawpaws, green coriander, or Korean watermelons. Creating relationships with farmers, because they understand how I plan to use their ingredients, has really helped my beers. Beyond that, sourcing is only one aspect.

You can’t just take a watermelon, throw it in a batch of beer, and hope that it comes to life, or hope you get a flavor profile. You have to know how to handle the ingredient. I think that’s where the culinary education has really benefited me. Anyone with money can get a certain ingredient for the most part, but what you do with the ingredient, that’s really what differentiates you. That’s something that I really pride myself on at Moody Tongue—how I handle the ingredient.

Hensel: You are experimenting with a lot of ingredients that may have not been tried in beers before. Can you take us through what that process is like for you? How many tries does it take you before you are pleased with the end brew?

Rouben: I had the opportunity to be a brewmaster at Goose Island for a little bit and I was creating different beers every week. In fact, that was my challenge—to create different beer styles and sometimes more than one every Thursday. Because of that I quickly learned what I did well and maybe what I could have improved upon. It also gave me the opportunity to incorporate ingredients that I found very successful and some that, maybe, I wouldn’t revisit.

So, now, at Moody Tongue, I’ve a really great understanding of what ingredients I want to utilize, how I want to incorporate them, and in which beer styles they’re going to excel.

Hensel: You developed your “culinary brewing” technique while at Goose Island. How did this idea come about?

Rouben: So, the idea all began while I was at the Culinary Institute of America. That’s where culinary brewing really started. That’s where I had my “aha” moment—I realized there’s so much more we can do with beer and that beer really belongs in the kitchen. It belongs on the menu.

Since then, I’ve just been building on it. Working as a chef in Napa Valley really opened my eyes as well when I saw the type of produce you can get at farmer’s markets there. And I was no stranger to farmer’s markets. I was going to them as a kid in Kentucky, in college in St. Louis, and when I worked in New York, but it was in Napa Valley that I started incorporating those ingredients into my homebrews.

One of my first attempts at this occurred when I was making pale ale. It was a good pale ale with Cascade hops, which are full of grapefruit aromas. I was at the farmer’s market that day getting produce for the restaurant, and I came across a pluot. A pluot is a hybrid of plum and an apricot—two fruits I love. So, I decided to incorporate pluots into my pale ale and all of a sudden I got these layers of flavor that I had never experienced before. It took my one-dimensional pale ale to a multi-dimensional, complex beer. 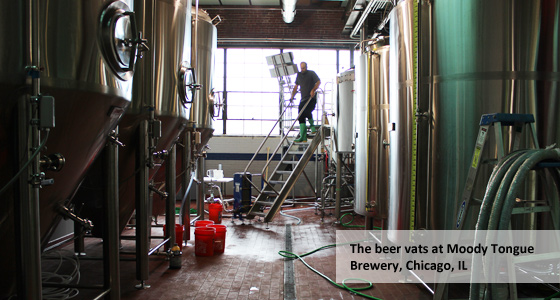 Hensel: Can you talk a little about your Farmers Market and Chefs Collaboration series that you did while at Goose Island? How did these come about?

Rouben: Even before Goose Island, while I was at Rock Bottom, I started writing alumni from the CIA that were executive chefs in Chicago. I really believed that brewing was so similar to cooking that it was a shame that chefs didn’t spend more time in a brewery because I’m pretty confident the majority of them are big fans of beer. So, I started inviting chefs into the brewery, and I imagine people were skeptical.

When I first started at Goose Island, I started doing the same thing. I finally convinced Rob Levitt and Allie Levitt to come in. At the time they had a restaurant called Mado. Now they have a butcher shop called Butcher & Larder. They were CIA alum and I convinced them to come into the brewery and make beer with me. We had an absolute blast. We spent about 9 hours together and created this Imperial Wit, which turned out exceptionally well. I was excited and they were excited because they saw the similarities between brewing and cooking.

Allie is a baker and brewing is so similar to baking. And Rob as a chef saw similarities as well. Having never brewed beer before, they were both naturals. They understood the sense of urgency, sanitation, tasting as you go, and cleaning as you go. Those same philosophies that apply to the kitchen apply to the brewery because I view a brewery as a kitchen. That’s what’s necessary to put out a great product.

That was just the beginning and next thing you know, I got Stephanie Izard, Rick Bayless, and Graham Elliot. And 55 chef collaborations later, I became a better brewer because I had the opportunity to work with chefs that had such expert palettes and were not shy about teaching me about how to handle the ingredient.

Through this, I got the idea for the farmer’s market series because so for many of the collaborations we would end up going to a farmer for a specific ingredient. And I said to myself, there are such beautiful seasonal ingredients in the Midwest, it’d be a shame not to showcase one ingredient from one farm in one beer every single week, especially while things are in season. So, that’s what I did. That’s what the farmer’s market series was all about.

Hensel: Moody Tongue plays on multiple trends right now—locally-grown produce, craft brewing, and the love of chefs and culinary. As we all know, trends come and go. How will you keep Moody Tongue relevant and exciting?

Rouben: By being honest with who we are. Following trends is something I've never done. Going to culinary school was definitely not trendy at the time. It is now. Being a brewer, I can definitely tell you, was the least trendy thing I could have done at the time. It kind of blows my mind that now people care about beer the way they do. I’m going to continue doing what I do, and as long as I’m honest and real with myself, I’m not concerned about what’s in or what’s out. That’s just too fleeting. It seems that if you make something really special and really delicious, people will want it. And that’s my only goal; to make something really beautiful and delicious. 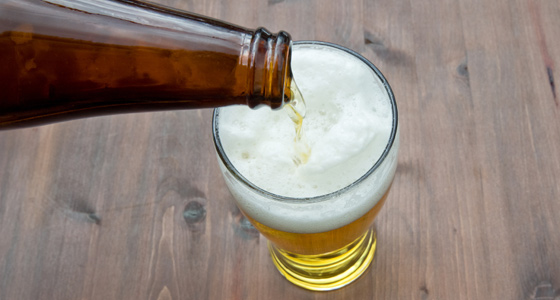 “Tingly Tongue teases the eyes and the palate with its dark color that implies heaviness. Instead, the first sip introduces savory spices of mustard seed and green coriander that are cut with citrusy orange peel and yuzu. And the second sip reveals how this beer got its name with Thai chilies that tingle the tip of the tongue.”
—Jared Rouben

Secondary Fermentatio: The fruits and spices will be added at the end of the second week.