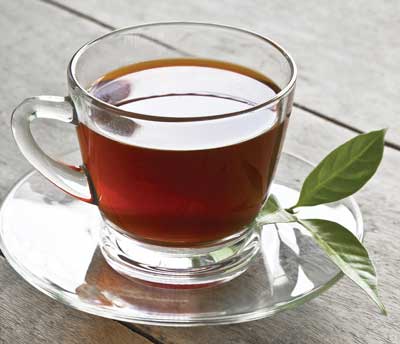 During the tea party in Lewis Carroll’s Alice in Wonderland, the Hatter tells Alice, “It’s always tea-time.” And so it is since tea is the second most popular beverage in the world. According to the International Tea Committee Ltd.’s 2014 Annual Bulletin of Statistics, the estimated global production of dry tea was 10.8 billion pounds in 2013, representing about 2 trillion cups of tea.

Tea is sold dry as loose tea, bagged tea, and instant tea as well as brewed and bottled and is available in both regular and decaffeinated versions. Specialty forms of dry tea, such as teas that expand into floral or other shapes when brewed, are also marketed.

All teas except herbal teas, mate, and red tea (rooibos) come from a single plant species, Camellia sinensis, that originated in China, Tibet, and northern India. It is grown around the world, resulting in thousands of varieties with flavors that vary by geographic origin, harvest time, weather conditions, soil quality, and manufacturing process.

A tea plant is ready for commercial harvesting three to five years after being planted in the tea field. The leaves and bud of the tea plant are used for processing. At harvest time, the bud and its two top (youngest) leaves are picked either manually or mechanically and transported to nearby factories where they undergo the following processing steps.

• Withering. The tea leaves are spread out on large screens called withering racks or troughs and forced-air dried for four to eighteen hours to reduce the moisture content to about 68%. Tea experts determine by touch and smell when the leaves are ready for the next step. Some factories may also take moisture readings.

• Rolling and Crushing. For black tea manufacture, the withered tea leaves are rolled and crushed to break cell walls, releasing an enzyme that promotes oxidation, and are simultaneously shaped by the machine rollers into thin, wiry, and tightly rolled leaf form. The rolling machines duplicate the orthodox manual method of rolling and crushing. In an alternative method called “crush, tear, and curl,” the leaves are cut into small pieces instead of rolling. The orthodox method is used primarily for loose tea, and the crush, tear, and curl method for bagged tea.

• Oxidation. In this step—formerly incorrectly referred to as fermentation because early processors thought that fermentation was the cause of the color change—the leaves are placed in trays and stacked in racks or spread out on surfaces and allowed to oxidize for a few hours. The enzyme polyphenol oxidase in the leaf catalyzes the oxidation of polyphenols in the leaf, causing the leaves to darken and develop the typical tea flavor. Among the oxidation products are theaflavins, which provide the color of the tea beverage, and thearubigins, which contribute to the taste, color, and body.

• Firing. Next the leaves are heated in large temperature-controlled ovens. Firing stops the oxidation process by deactivating the enzyme and dries the leaves to approximately 4% moisture content so that mold or other degradation of the leaf does not develop in packaging and transportation. 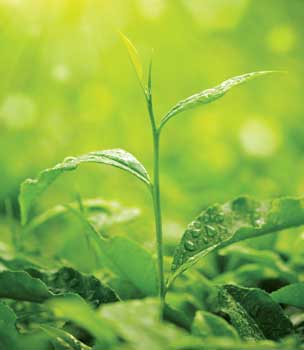 The system used in grading black teas uses the first letter of words that describe the physical characteristics of the leaves. The five main grades, in descending order, are Orange Pekoe (OP) for large whole leaves, Pekoe for leaves that are slightly smaller, Broken Orange Pekoe (BOP) for broken leaves, Fannings (F) for very small pieces of tea leaves, and Dust (D) for the smallest pieces of tea leaves and tea fines. Additional terms may be added: Golden (G) indicates that the tea leaves show desirable golden color (during the harvesting of the top two leaves and bud, some plucks may have a bud that develops a golden hue during processing). Tippy (T) indicates that many young tea buds are present. Flowery (F) indicates a slightly more open or broader leaf with a crimped appearance resembling a crushed flower petal. The letters F and SF may be added to the grades to indicate a finer grade and a super fine grade, respectfully, and the numeral one is sometimes added to further define better grades of tea among similar teas. The following are the grades for black tea:

For normal commerce, TGFOP and higher grades are generally recognized as the largest and fanciest grades of tea.

• Packing and Shipping. The sorted and graded tea is then packed and shipped to tea companies for packing for direct sale to consumers or for further processing, such as blending, flavoring, and extracting, and production of tea-based consumer products. 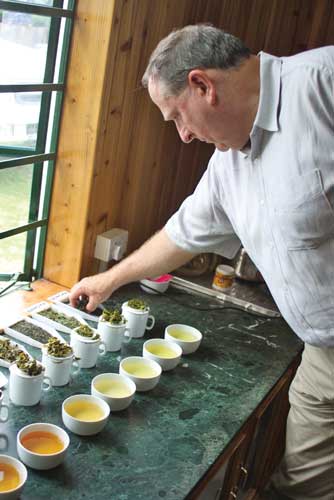 ISO 6078 defines terms for the processing and assessment of black tea, including appearance, color, and odor of dry leaf; taste and appearance of liquor; appearance of infused leaf; method of manufacture; and information about grades. ISO 1839 addresses sampling and the water used for testing, and ISO 3103 presents a standard method for preparing a tea beverage for use in sensory testing of black tea. According to ISO 3013, for each 100 mL of water to be used, 2 g of tea is placed into a white porcelain or glazed earthenware pot, and freshly boiling water, similar to the drinking water where the tea will be consumed, is poured into the pot to within 4 mm – 6 mm of the brim. The tea is allowed to brew for six minutes and then poured into a white porcelain or glazed earthenware bowl with a capacity of 380 mL or 150 mL. If the test involves milk, 5 mL of milk is added to a large bowl or 2.5 mL to a small bowl before pouring the infused tea. The ISO 3103 method is specific to black tea. No ISO standards have been established for tasting oolong tea and green tea, so methods for tasting those teas vary by tea grower and manufacturer. Tony Gebely, writing on the website The World of Tea (www.worldoftea.org), has proposed tasting standards for those teas and others.

The STI recommends the following procedure: Using a professional three-piece porcelain or earthenware cupping set consisting of a cup with a handle, a lid for the cup, and a bowl without a handle, the tasters measure 3 g of tea leaves into the bottom of each cup, pour 150 mL of boiling water over the leaves, set the lid on the cup, and let the tea steep for up to six minutes, depending on the type of tea. While the tea is steeping, the tasters note the appearance and aroma of the dry leaves. After the steeping period, they pour the tea liquor into the bowl, bring the bowl to their noses, carefully lift the lid, breathe in the aroma, and note the appearance and aroma of the liquor. They then turn the cup upside down, knock the infused leaves onto the lid, set the lid on the cup, and note the appearance and aroma of the infused leaves. Next they slurp a spoonful of the liquor and note their impressions on evaluation sheets, using standardized terminology.

Black tea is the tea most commonly consumed around the world; about 85% of the tea consumed in the United States is black tea. Lipton, sold by Unilever (www.unilever.com), is the world’s leading tea brand, sold in more than 150 countries. Some of the other major well-known companies are Tetley (www.tetley.com), Wissotzky Tea (www.wtea.com), Twinings of London (www.twinings.com), and Bigelow Tea (www.bigelowtea.com).

Specialty teas are a fast-growing segment of the tea industry, Goggi said, but the specialty tea market is still relatively small compared to the more traditional tea bag market. Specialty teas include exotic and unique teas and blends and tend to be from specific parts of countries and produced at a particular time of the year. The amount produced is relatively small, so the pricing is higher. Among the specialty tea companies are Teavana (www.teavana.com), DavidsTea (www.davidstea.com), Argo Tea (www.argotea.com), Numi Organic Tea (www.numitea.com), Tazo (www.tazo.com), and the Stash Tea Co. (www.stashtea.com). The growing interest in specialty teas is exemplified by recent acquisitions by larger companies, such as Teavana by Starbucks, Argo by 7wire Ventures, and Peet’s Coffee & Tea by Joh. A. Benckiser. Goggi pointed out that in addition to standard black, oolong, green, white, and specialty teas, there is another category of teas called dark teas, which are historically produced in China and fermented after some degree of processing. Pu’erh is the most well-known dark tea in the West, and more dark teas are making their way to the U.S. market.

The handling of tea has improved over the years, Goggi said. A lot of mechanization and equipment have been added to enhance quality control and drive consistency. For example, some manufacturing plants pass warm air through the bed of tea leaves during the oxidation step, and some utilize multi-stage or fluid-bed dryers. But that doesn’t necessarily make the tea better, he said. As long as good manufacturing processes are used in the factory, there will be no microbiological issues, and even if they arise, any microbes will be killed in the firing step. He added that generally very little analytical testing is done during the tea manufacturing process. Monitoring of product temperatures, relative humidity, and moisture is often done, but that relates more to process control than quality testing, he said.

Goggi said that the quality of tea, like that of wine, depends on cultivar or variety of tea, terroir, and manufacturing process. If one of them goes wrong, the quality goes down. Challenges ahead are driven not by quality but by the economics of the business. The cost of production continues to go up, and if yields are lower, prices go up. In addition to economic sustainability, there are the fundamental pressures of a sustainable socioeconomic system, ensuring that everyone within the value chain gets a fair return. There are also typical agricultural challenges, he added. For example, Indonesia, competing for land, has removed tea bushes and planted palm trees for palm oil production. Some tea plants have been around for 185 years, he said, but once the tea plant is taken out, it’s gone forever.

More than 400 papers on or involving tea have been presented at the IFT Annual Meeting & Food Expo since 1998. Here are the titles of some of the papers presented in 2014:

• Green Tea Increases the Bioavailability of Mercury in Fish