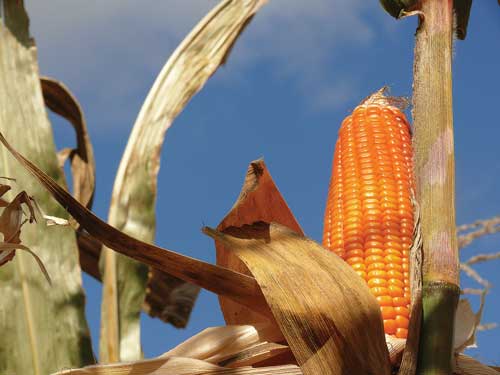 Producing corn with more vitamin A

Purdue Univ. researchers have identified a set of genes that can be used to naturally boost the provitamin A content of corn kernels, a finding that could help combat vitamin A deficiency in developing countries and macular degeneration in the elderly.

Professor of agronomy Torbert Rocheford and fellow researchers found gene variations that can be selected to change nutritionally poor white corn into bio-fortified orange corn with high levels of provitamin A carotenoids, which the human body can convert into vitamin A. Vitamin A plays key roles in eye health and the immune system, as well as in the synthesis of certain hormones. The dark orange color of these corn varieties also makes them more culturally acceptable to consumers in African countries where yellow corn is generally fed only to animals.

“This study gives us the genetic blueprint to quickly and cost-effectively convert white or yellow corn to orange corn that is rich in carotenoids and we can do so using natural plant breeding methods, not transgenics,” said Rocheford.

Previous research by Rocheford and his colleagues identified two genes that contribute to provitamin A carotenoid levels in corn kernels, but “we wanted more cookies in the jar for breeders to pick from,” he said. The researchers used a combination of statistical analysis and prediction models to identify and assess the potential usefulness of genes associated with carotenoid levels in corn. They evaluated data sets from about 200 genetically diverse lines of corn at varying scopes of investigation—from the entire corn genome to stretches of DNA surrounding small sets of genes. They uncovered four genes that had not previously been linked to carotenoid levels in corn kernels.

Though many genes likely contribute to carotenoid levels in corn, “we’re pretty confident that our previous and current research has now identified several genes that are the major players,” Rocheford explained.

Their study found that a combination of visually selecting corn with darker orange kernels and using a number of these favorable genes could be an effective way to rapidly convert white and yellow corn varieties to orange corn with higher levels of provitamin A and total carotenoids. “We now have the genetic information needed to begin developing a major public-private sector collaboration with the goal of providing orange corn with high levels of provitamin A to farmers throughout Sub-Saharan Africa,” he declared.

The study also showed that using a more targeted approach to predicting the usefulness of a small set of genes was as effective as evaluating the whole corn genome, said Brenda Owens, doctoral candidate and first author of the study. “Having this smaller list of genes to select for means that we can make the improvement of carotenoid levels in corn a simpler, faster process for plant breeders,” she said.

Their research has yielded varieties of orange corn with markedly higher amounts of provitamin A carotenoids. But further efforts to produce even higher levels will be necessary to offset degradation of nutrients after harvest and reduce the amount of corn African consumers would need to eat to attain enough provitamin A, noted Rocheford.

Varieties of orange corn are currently being grown in Zambia, Zimbabwe, Nigeria and Ghana. An open-pollinated variety of orange corn could be available for organic and local grower operations in the U.S. by 2016, he concluded.

New opportunities in the bio-based economy

Bio-based chemicals are expected to comprise more than 10% of the chemical market by 2015, according to a recent U.S. Dept. of Agriculture-funded report “Why Biobased: Opportunities in the Emerging Bioeconomy.” Commercialized polymers, such as polylactic acid (PLA) and polyhydroxyalkanoates (PHAs), are firmly established in the market, with annual growth in the range of 10–30%. PLA and starchbased polymers accounted for 47% and 41%, respectively, of total consumption of biodegradable plastics. The global worldwide capacities of bio-based plastics will increase to 3.45 million metric tons in 2020, while the market for industrial enzymes is expected to grow 6.5% annually to reach $7.4 billion by 2015. Eventually, Cargill and McKinsey & Co. believe that two-thirds of the total volume of chemicals can be produced from bio-based materials, representing over 50,000 products and a $1 trillion annual global market.

According to a Lux Research report “Dynamics of Venture Capital Funding in the Bio-based Chemicals Industry,” the biobased materials and chemicals industry is poised to attract nearly $1 billion in investment in 2014. The estimated $974 million investment represents a 28% increase over 2013. North American companies dominate the bio-based industry. Fermentation is the leading technology, totaling nearly $3 billion in investments since 2000 and hitting a peak of $475 million in 2011.