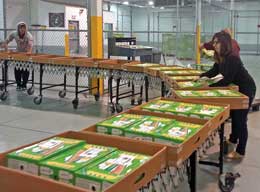 Ionizing radiation results from the impact of either electrons or photons carrying sufficient energy to remove electrons and thereby ionize atoms or molecules, according to a presentation by Suresh Pillai, director of the National Center for Electron Beam Research at Texas A&M University, College Station, Texas. Electron beams are one of the three common sources of ionizing radiation used in sterilization or pasteurization of foods and packaging materials. The other commonly employed sources are radioactive isotopes and x-rays. As with any other technology, each of these irradiation technologies has certain limitations and positive attributes.

The effect of radiation on different microorganisms can be expressed as a decimal reduction value or D value, the dose required to reduce pathogen numbers by a factor of 10. D values are influenced by the type of microorganism, the food product temperature, the food product state (frozen/refrigerated/room temperature). Typical values provided by Pillai range from 0.10 for E. coli, 0.2 for Salmonella spp., and up to 4.0 kGy for noroviruses. Dividing allowable doses by the corresponding D values of different microbes provides a framework for estimating the expected log reduction that can be achieved.

According to Pillai, the mechanisms by which ionizing radiation inactivate microbes include direct damage to DNA and indirect damage from free radicals generated from water molecules. The free radicals damage proteins and cell membranes. Factors affecting radiation effectiveness include organism type, numbers of organisms (initial load), composition of the food, presence or absence of oxygen, the physical state of the food (fresh or frozen), and the age of the organisms.

In a recent posting in Food Technology’s ePerspective blog (foodtecheperspective.wordpress.com), Russell Stein, vice president of GRAY*STAR Inc., Mt. Arlington, N.J. (www.graystarinc.com), points out that irradiators constructed to administer one level of dose are not easily adapted to another level, though dose can be controlled somewhat by residence time. In particular, he observes that the allowable dose for dehydrated spices and seasonings is 30 kGy while allowable doses for fresh and frozen foods are less than 10 kGy, except for pet food and animal feed.

Types of Irradiators
Electron beam irradiators, such as those researched and operated at Texas A&M, use a linear accelerator to direct a stream of energetic electrons at a target. Electrons have a limited penetration capability compared to gamma rays from radioactive isotopes or x-rays. This means that foods must be presented to the beams in a configuration that allows uniform dose distribution. Commercially, in eBeam processing, the food is irradiated from the top and bottom to ensure uniform dose delivery. Presently, cases of fruits weighing 5 lb and bags of spices weighing between 15 lb and 30 lb are routinely processed using eBeam technology.

Other advantages of the eBeam are that the dose or energy level can be controlled and it can be turned on and off as needed. The processing capabilities of eBeam equipment are based on the operating power measured in kW. Pillai says that the eBeam machine at Texas A&M University can be adjusted to process approximately 10,000 lb of fruit per hour or 15,000 lb of frozen ground beef per hour. The commercial processing costs are generally on the order of a few cents per pound and depend on factors such as volume and handling.

Gamma rays are emitted by radioactive isotopes, which typically are produced by exposure of an element to the neutrons of an active nuclear reactor. Cobalt-60 (Co60) is a long-lived metal that emits powerful gamma rays in all directions. The typical format is a thin rod, called a pencil. The pencils are placed in a rack that is kept under 12 feet of water to shield workers from the rays. Seven-foot-thick concrete walls and lead shielding are also used as protection in a typical irradiator.

Packaged foods on pallets are conveyed in a labyrinthine path designed to expose the food uniformly to the source after it is raised from its pool. The shielding contributes to the relatively high cost of such a radiator. Dose is measured by special devices placed throughout the load, which respond in some way to the radiation, by changing color or some other property. While time of exposure can be controlled somewhat, it is difficult to make large changes without somehow manipulating the source. The cobalt decays, so the pencils are moved within the rack and new pencils are added and depleted ones removed, all by remotely operated manipulators.

GRAY*STAR addressed some of the cost and operational issues of conventional gamma irradiators with its unique Genesis design. In this design, the cobalt source always is kept under water. Food is loaded into thin-walled steel bells in which compressed air keeps out the water. The bells are lowered into the pool close to the source for a specified time and then switched in place to provide uniform exposure. 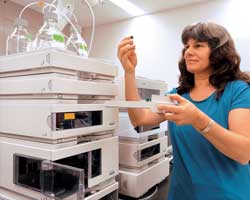 Phytosanitation
The U.S. Dept. of Agriculture’s Animal and Plant Health Inspection Service (APHIS) has approved five facilities in the continental United States to treat imported agricultural commodities to address phytosanitary requirements. These include the eBeam facility at the National Center for Electron Beam Research at Texas A&M University (ebeam.tamu.edu), an eBeam facility in Sioux City, Iowa (sadexcorp.com), a cobalt-60 facility in Gulfport, Miss. (gatewayamerica.net), and an x-ray facility in Hawaii operated by Cavallo Growers.

Ron Eustice, a consultant in Minneapolis, Minn., publishes Food Irradiation Update, which is sponsored by GRAY*STAR. Eustice retired from the meat industry as a strong advocate for the use of irradiation to control E. coli O157:H7 and other pathogens in ground meat. He points out that a major use for irradiation now is to control insect pests on imported fruits, especially from the tropics. The cobalt-60 facility and the x-ray facility in Hawaii enable farmers there to send fruits and vegetables safely to the continental United States. Another installation on the Gulf Coast of the United States irradiates imported fruit from Central America and Mexico.

Indian mangoes have been banned from Europe because of a shipment that contained fruit flies. As a result, new facilities have been constructed in India to treat fruit for export using irradiation. Capacity is 10–15 metric tons/day.

Most of the gamma irradiators in the United States were constructed for purposes other than foods, such as for medical devices and packaging materials. As Stein of GRAY*STAR observes, these applications typically use very high doses compared to those approved for food. It is not easy to switch back and forth.

Market Acceptance
When irradiated foods have been available, they have sold well. There are grocery stores in the United States that offer irradiated ground beef, clearly labeled as such. Irradiated raw oysters, guavas, mangoes, persimmons, and other tropical fruits are now commercially available in the United States. Food company executives have long believed erroneously that there was strong resistance among consumers to irradiation, but experience seems to contradict this belief. Irradiated foods in the United States must carry the radura symbol on their label. The issue of what to call the process has also been studied.

Pillai believes that if consumers are offered the choice of purchasing irradiated foods at the grocery store, the volume of irradiated foods sold in the United States will increase. He bases this supposition from data provided by APHIS, which shows that the volume of irradiated agricultural produce has increased from approximately 429,901 lb in 2007 to more than 28 million lb in 2013. All indicators point to a significant increase to these figures in 2014.

The hazards from microbially contaminated fresh produce, such as leafy greens and spinach, require the use of irradiation technologies. Similarly, irradiation is being used, albeit to a small degree, to address Vibrio contamination in raw oysters. This off-the-shelf technology is capable of addressing pathogens from high-risk commodities such as sprouts and berries. The FDA-approved dose of 1 kGy for fresh foods can achieve an extension of shelf-life and a collateral reduction of microbial pathogens.

Food irradiation is not the only solution for many of the foodborne hazards we face, but it is a powerful option. Eustice claims, “Food irradiation is a cold pasteurization process that will do for meats, produce, and other foods what thermal pasteurization did for milk decades ago.” That could become true if courageous executives make the commitment and food scientists and engineers continue research and development in the field.