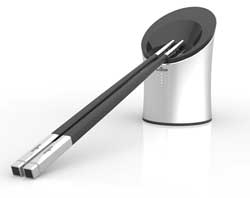 ‘Smart’ chopsticks detect bad oil
Chinese software giant Baidu has unveiled a pair of chopsticks with sensors that can determine the quality of cooking oil. A video for the chopsticks shows the eating utensil being dipped into three different oils—olive oil, cooking oil, and “gutter” oil (black market oil recycled from waste or discarded oil).

An accompanying app provides the results—positive (good) for the olive and cooking oil and negative (bad) for the gutter oil as well as temperature of the oils. The chopsticks also feature a light that turns blue when good or red when bad. Measures of oil quality include total polar material—an indicator that the oil has undergone chemical deterioration from heat such as deep-fat frying. In the future, the high-tech chopsticks may be able to detect contaminants, nutrients, and calories.

Microalgae serve as basis for food ingredients
Microalgae are considered a key agricultural crop of the future due to their ability to produce sustainable ingredients for food, animal feed, and bio-based materials. Depending on the algae species and the way they are grown, algae may contain proteins, lipids, carbohydrates, and minor components such as sterols, astaxanthin, and omega-3 and omega-6 fatty acids.

Recently, a mobile algae refinery pilot plant became operational in Lelystad, The Netherlands. The plant, called VALORIE for Versatile ALgae On-site Raw Ingredient Extractor, is a joint venture between TNO and Algae Food and Fuel. Innovative mild separation technology enables the very tough cell wall of the algae to be broken down nondestructively so that ingredients like proteins, oils, and carbohydrates can be extracted in an energy-effective manner. Companies can use the pilot plant to scale up production processes.

“The success of thin-walled tubing helped increase algae production efficiency on a small scale, and now will be replicated on a larger scale,” explained Raz Rashelbach, R&D manager at Algatech. “This is to support our strategy to double astaxanthin production capacity. The increase in sun exposure through the use of tubing helps produce the purest astaxanthin available in the market today.”

A section of Algatech’s factory will serve as a beta site for advanced glass components developed by SCHOTT for use in photo bioreactors.

Durum wheat pasta with 20% more fiber
University researchers in Australia and Italy have spent two years on making spaghetti and other pastas healthier without compromising on taste. The scientists have studied the dietary fiber content in durum wheat. The outer shell of a durum wheat kernel is used to make high-fiber whole meal pasta, while the starchy inner parts of the kernel are used in traditional spaghetti.

Whole meal pasta is already known for its high dietary fiber but Professor Rachel Burton from The University of Adelaide in Australia said many people choose not to eat it because of its taste and texture. “Italians tend to have their pasta ‘al dente’ which means it has a firmer texture, but the whole meal tends to go a bit softer,” Burton said.

Italian Ph.D. student Ilaria Marcotuli has worked alongside the Australian Research Centre of Excellence in Plant Cell Walls to increase the fiber content in the inner parts of durum wheat. Marcotuli identified two Australian lines of durum wheat not currently being used in pasta production that could increase the dietary fiber in spaghetti by up to 20%. “What we are trying to do is to identify the genes which are involved in the biosynthesis of these dietary fiber components, and once we know what the genes are we can think of ways to manipulate them,” said Professor Geoff Fincher with the Plant Cell Walls Centre.

Scientists at the centre are also trying to increase the dietary fiber in beta glucan, which is found in oats and barley.

If you are working on or know of some cutting edge technology that you would like to be featured in this column, please send an email to [email protected]