Fueled by a somewhat stronger economy and pent-up demand, restaurant sales are projected to hit a record high of $683.4 billion in 2014, up 3.6% from 2013 (NRA, 2014). Although the NPD Group reports that Americans made 61 billion visits to restaurants in the year ending May 2014, about the same as last year, traffic is nearly 1.3 billion annual dining out occasions below pre-recession levels (Glazer, 2014). 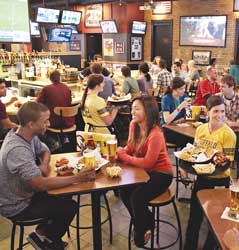 Chains and Menu Gains
Looking ahead, food/beverage sales are projected to grow 4.4% in limited-service restaurants and 2.6% in full-service eateries in 2014 (NRA, 2014).

Bakery café and Asian are the menu categories projected to lead growth overall in the restaurant industry this year, each at 7% growth, followed by chicken, steak, and “other sandwich,” each at 3% growth (Technomic, 2014b).

Restaurants continue to go retail as a way to expand their business; one-quarter offer packaged food items for retail sale in their operations or in grocery stores (NRA, 2014).

Two in five consumers purchased items from a food truck in 2013, and nearly seven in 10 said they would be interested in doing so (NRA, 2014).

With 39% of adults now choosing a restaurant because it offers takeout or delivery, operators are focused on improving their services; 55% of consumers would order takeout/delivery from quick-service restaurants, and 56% would do so from table-service establishments (NRA, 2014). Burger King’s BK Delivers program is now available in more than a dozen metropolitan markets.

New Customers and Competition
Restaurant traffic overall remained flat for the year ended May 2014, according to NPD. Full-service restaurants were hardest hit, with midscale/family dining restaurant traffic declining 3% and casual dining down 2% (Glazer, 2014).

Consumers age 50 and older are now making more visits than their younger counterparts to every segment of the restaurant business. Annual visits by consumers ages 25–49 have dropped a total of 44 visits per person over the last three years (NPD, 2014b; 2013a).

NPD’s forecast is for foodservice industry traffic to grow less than 1% annually for the next several years (NPD, 2014a). At the same time, the competition for America’s away-from-home food dollars is stronger than ever.

Upgraded retail prepared foods are another fast-growing source of competition. Over one-third (37%) of consumers now buy ready-to-eat and heat-and-eat fresh prepared foods once a week or more, up from 22% in 2013 (Technomic, 2014c). 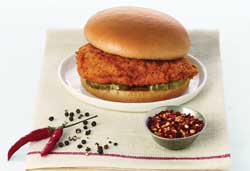 Consumer preferences for hot and spicy, bold, coupled (e.g., chili-lime), and ethnic flavors have grown dramatically over the past two years; interest in totally new and unique flavors is down (Technomic, 2013a).

Street food–inspired main courses (e.g., kebabs); specialty/gourmet sandwiches and burgers; half portions for a smaller price; tapas, meze, and dim sum; and meatless/vegetarian items are among the hot center-of-the-plate restaurant trends for 2014 (NRA, 2013).

As culinary sophistication grows, it will be important to experiment with more interesting flavors for staples like chicken, pork, or even Italian entrees (Technomic, 2013a; Figure 2). 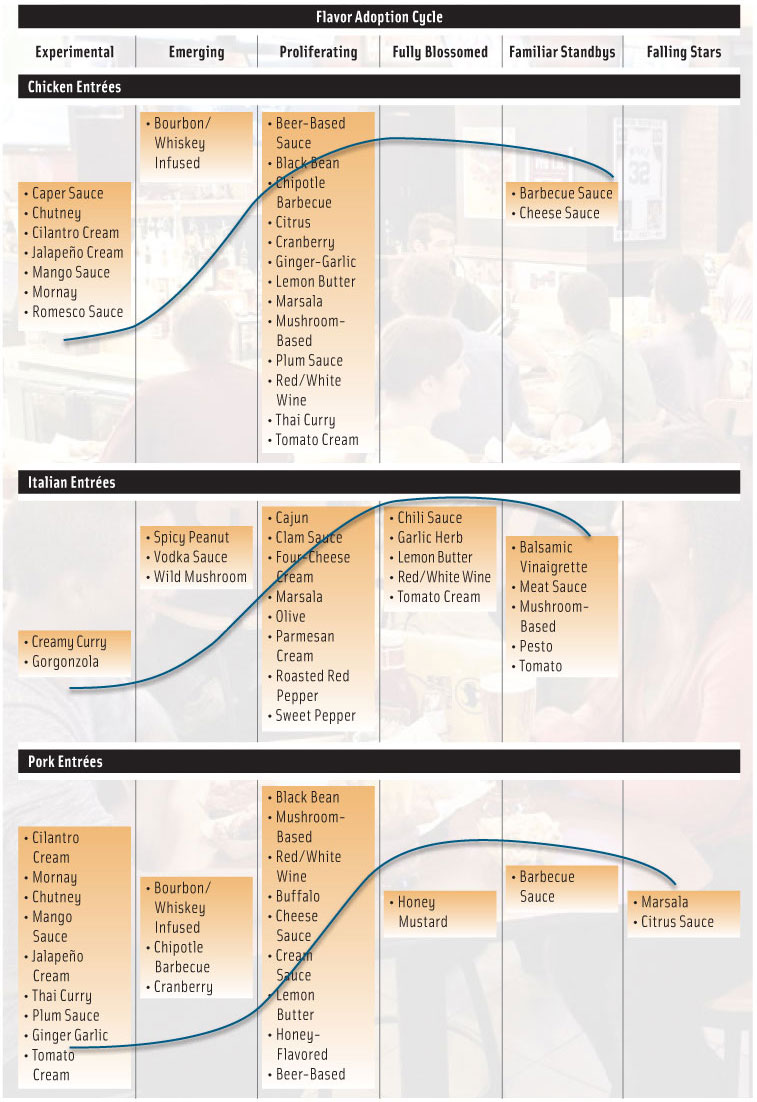 Non-wheat and Asian noodles (e.g., soba) are among the trendy sides for 2014; black beans are among the fastest-growing side dishes on menus (NRA, 2013; Datassential, 2014). Interest in ethnic foods continues to climb. After Italian, Mexican, and Chinese, the cuisines Americans most report eating in 2014 include Southern U.S., sushi, Thai, Greek, and Spanish (FMI, 2014a).

One-third of consumers are more interested in ethnic flavors and cuisines than they were two years ago; half of those ages 18–34 feel that way (Technomic, 2013a). Peruvian, Korean, Southeast Asian (e.g., Thai, Vietnamese, etc.), regional ethnic, and ethnic fusion top the list of cuisines more than half of ACF chefs cite as trendy in tablecloth restaurants this year (NRA, 2013).

Kale, oyster mushrooms, pickled vegetables, brussels sprouts, and sweet potato fries were among the vegetables that diners ordered with increasing frequency in 2013 (Datassential, 2014). Carrot and celery are also among the fastest-growing juices in restaurants along with pomegranate, apple, cranberry, and pineapple as well as juices described as natural, organic, and fresh-squeezed and those containing ginger. Tomato, carrot, mango, mixed fruit, and grape moved into the top 10 varieties of juice ordered in 2013 (Datassential, 2014).

Fruit and vegetable side items for kids’ meals and local produce were among the hot menu trends in limited-service restaurants in 2014 (NRA, 2014).

One-third of consumers say they would be willing to pay more for a soup described as containing a serving of vegetables, heart healthy, or high in protein (Technomic, 2014d).

Brioche French toast and flat-bread are among the fastest-growing menu items at breakfast; parfaits, frittatas, and chilaquiles are other hot new early morning items (Datassential, 2014).

Non-wheat flours (e.g., rice, millet, and peanut) and ethnic flours (e.g., fufu, teff, and cassava/yucca) are among the hot culinary trends for 2014 (NRA, 2014). Watch for high-protein and vegetable breads to arrive on the culinary scene.

Chefs are driving a new trend to natural sweeteners, which are used in breads and baked goods. These include agave, honey, concentrated fruit juice, maple syrup, muscovado, and demerara sugars (NRA, 2013).

Snacks: The New Meal
With snacks accounting for 53% of all eating occasions in 2013 and 36% of consumers buying gourmet snacks for everyday use, the opportunities for unique, culinary-focused food-service snacks and appetizers are enormous (Hartman, 2013a; Tanner, 2013). Healthier snacks and savory snacks continue to outpace traditional snacks (Wyatt, 2014).

There is strong interest in breaded vegetables, both as a snack and a side dish, and especially with salad entrees. Stuffed mushrooms/jalapenos and sampler cheese plates are other currently popular appetizer items (Technomic, 2014e).

Bread is an overlooked appetizer opportunity. Consumers would be more likely to order garlic bread, bread sticks, or cheese bread as an appetizer than salsa or various dips (Technomic, 2014e).

Hybrid desserts such as the cronut (croissant/doughnut) or townie (tart/brownie) remain among the top sweet culinary trends for 2014 (NRA, 2013). Panna cotta, cupcakes, coconut cake, churros, and vanilla custard were among the fastest-growing desserts in 2013; red velvet, peanut butter, and caramel were among the cake varieties grabbing attention.

Shortbread, lemon, mini, macaroon, and Italian were among the trendy cookie varieties last year; ganache, mini pies/tarts, coconut/banana cream, and almond made the list of pies growing in popularity on menus (Datassential, 2014).

With beverages being more frequently consumed as snacks and proving successful as a strong restaurant competitive differentiator, offering cutting-edge culinary and calorie-controlled beverages is a must for foodservice operators.

With sparking water sales up 31% in the retail marketplace, expect flavored waters made with real fruit/juice and fruit-infused waters to be in high demand (Packaged Facts, 2014).

Healthy and Humane
More than eight in 10 restaurant operators say their customers pay more attention to nutrition than they did two years ago. Sixty percent of those who frequently opt for full-service, quick-service, and take-out/delivery dining say that healthy menu items impact their restaurant choices (NRA, 2014).

Four in 10 consumers strongly agree that they would be more likely to visit a foodservice establishment if it offered better-for-you options. Gen Z, Millennials, and Gen Xers are more likely than Baby Boomers to say this is an important restaurant criteria (Technomic, 2014f).

Lack of healthy options for children’s breakfast is one of consumers’ biggest complaints about fast food (Technomic, 2013b).

Fresh remains the most important purchase influencer in restaurants, cited by 83% of consumers; local is cited by 73%, natural 72%, and farm-raised 63% (Technomic, 2014f).

How do diners define a healthy menu at restaurants? They expect the food to be fresh, prepared with techniques like grilling or steaming, use more fruits/vegetables than average, and not be deep-fried (Mintel, 2013a).

Nearly six in 10 consumers (58%) say they are likely to make a restaurant choice based on its eco-friendly practices; 55% say they’re more likely to pick a restaurant that offers menu items that were grown or raised in an organic or sustainable manner (NRA, 2014).

Animal welfare is very important to 52% of diners. Grass-fed, pasture-raised, free-range, and cage-free all add up in diners’ minds to healthier and more flavorful fare (Hartman, 2013b). As for causes, consumers would most like to see restaurants support those that fight hunger (Technomic, 2014g).

With one-third of consumers purchasing organic meat/poultry, expect more demand for that in restaurants along with locally sourced products, sustainable proteins, grass-fed beef, and free-range pork/poultry (FMI, 2014b).

Chipotle Mexican Grill and Panera Bread are the undisputed leaders when it comes to addressing sustainability and transparency issues. Chipotle’s “Food with Integrity” program is focused on “finding the very best ingredients, raised with respect for the animals, the environment, and the farmers.” It is the first major chain to embrace non-GMO products.

Panera Bread has a long and strong history of being committed to clean label, transparency, and the fight against hunger. The Panera Bread Foundation’s nonprofit Panera Cares Community Cafés work with customers to help feed those in need.

NPD. 2013b. Restaurant supper visits will fare better over next ten years and recessionary traffic losses will be recovered. Press release, June 5.

NPD. 2014b. U.S. restaurant traffic remains in the doldrums with no tailwind in sight. Press release, July 23.

NPD. 2014c. Families with kids continue to cut down on restaurant visits. Press release, May 14.

Technomic. 2014d. The left side of the menu: soup & salad consumer trend report.

Technomic. 2014g. The gift that keeps on giving: restaurants and charity. Am. Express Market Briefing, June.