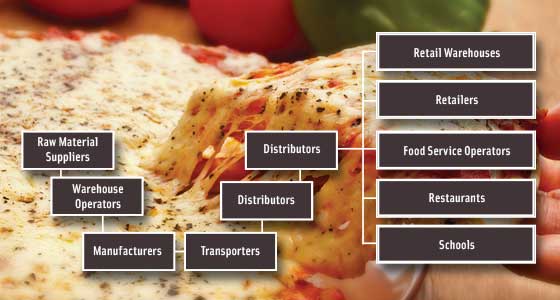 Food traceability is a cornerstone of the increasingly complex, industrialized, and global food system. In the event of a recall, traceability is critical to respond rapidly and reliably to protect consumer, or animal or plant health, especially when large quantities of contaminated products have been distributed across widespread markets. Traceability is also essential for producers and manufacturers that need to track items for supply chain management and for clients who want seamless data about the products they buy.

The ability to ascertain product origin and attributes from the farm through food processing, retail, and food service to consumers is growing in importance. Increasingly, public health concerns are requiring traceability. However, economic competition, which will reward those who can more effectively and reliably track and trace product back and forth through each step of the chain, will drive long-term adoption.

The Global Food Traceability Center (GFTC) launched two projects in 2013 to further understand the landscape of food traceability regulations on a global scale, and provide regulators and the food industry with the current best practices. Both projects were recently completed, and the final reports were published in the September issue of Comprehensive Reviews in Food Science and Food Safety. The article “A Guidance Document on the Best Practices in Food Traceability” is available at http://onlinelibrary.wiley.com/enhanced/doi/10.1111/541-4337.12103/; the article “Comparison of Global Food Traceability Regulations and Requirements” is available at http:// onlinelibrary.wiley.com/enhanced/doi/10.1111/1541 4337.12101/.

Comparison of Food Traceability Regulations
Many developed countries have implemented new legal requirements for traceability, and exporting countries are under pressure to comply with the regulations set up by importing countries. The GFTC reviewed the status of regulatory attention to traceability in 21 of the 34 member countries of the Organization for Economic Co-operation and Development (OECD) for comprehensive applicability to all food commodities and processed foods.

The comparison was based on results from 10 questions designed to determine whether mandatory traceability regulation(s) exist(s) at the national level; regulations address imported products and, if so the nature of required documentation; national electronic database(s) exist for traceability and, if present, their accessibility; labeling regulations allow consumer access and understanding of traceability; and to draw out additional related information. Observations were also made about select industry-led requirements since these protocols and standards are sometimes precursors to or part of strategies to mitigate the need for government regulatory intervention.

The review ranked countries having specific traceability regulations for all commodities, both domestic and imports, as “progressive”. Countries with less broad or stringent regulations were ranked as “moderate”. Countries that are still in the developmental stage of mandatory or industry-led traceability requirements were ranked as “regressive”. Aggregate scores for the countries were developed from the rankings derived from the 10 questions, to provide an overall ranking of superior, average, or poor.

Most of the countries’ traceability systems were studied previously by Charlebois and MacKay (2011). The recent GFTC review provides further insight into traceability regulations at the international level. For example, although China was an emerging economy in the earlier work by Charlebois and MacKay (2011), and has had issues with food safety in the past several years, it was included in this study because it has become a major trading partner for countries such as the United States and the European Union (EU). China was the largest market ($26 billion) for U.S. agricultural exports in 2012. China has also taken substantive steps to improve its food traceability and safety requirements in recent years.

Comparative Findings on Regulations
With mandatory regulations for traceability of food and feed adopted in many European countries, EU member countries as well as pan-European countries, such as Norway and Sweden, had an overall ranking of superior. Australia, Canada, Japan, Brazil, New Zealand, and the United States ranked average. China ranked poor. Sufficient data were not available to rank the Russian Federation (Table 1). 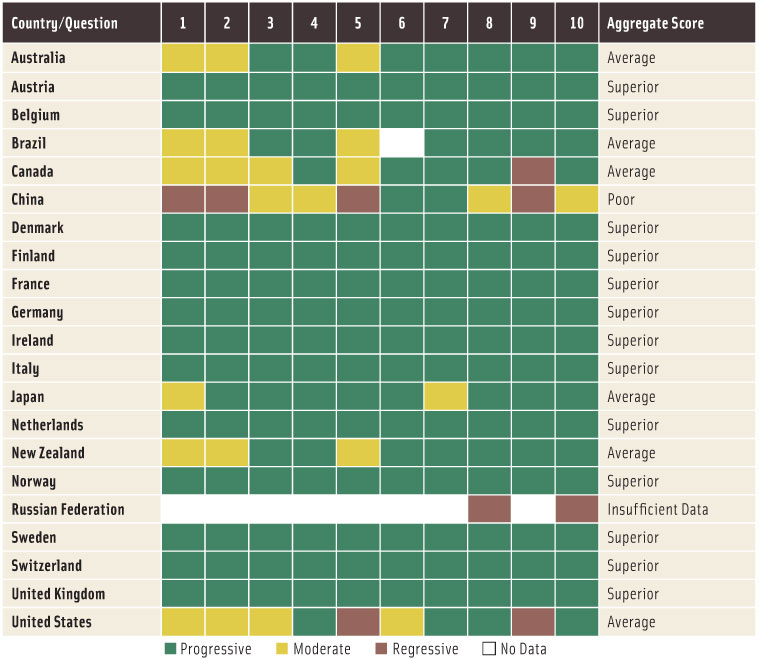 Canada ranked average. Although currently there are no national regulations in Canada on farm-to-fork traceability, the Canadian government has focused on livestock identification and processed meat traceability through its Food Safety Enhancement Program (FSEP). Among other requirements for recall, this plan requires that every company is equipped with methods to trace product and raw ingredients, pre-mix ingredients, and rework by maintaining product identification throughout the process until final packaging. However, Canada lacks specific legislation on the traceability of other commodities, although there are efforts and pilot projects at the industry and provincial levels for the traceability of products such as hogs, dairy, poultry, and egg products.

China ranked poor, since its traceability system is still under development, and traceability is largely unregulated. Although livestock identification has become mandatory, and significant progress has been made in establishing guidelines for specific sectors, the country is still in the early stages of implementing a system of traceability for other products at the national level.

The research led the authors to note the importance of harmonization of traceability requirements and regulations to minimize the potential for misunderstanding and delays due to difficulties in understanding each country’s practices, to strengthen interoperability in order to overcome unintended trade restrictions, and to improve traceability of food products globally.

While animal identification and traceability have been a priority in many developed countries, traceability of other commodities such as seafood has been a challenge, especially in less-developed countries. In 2009, a study on “Understanding China’s Fish Trade and Traceability Systems” (Clarke 2009) revealed disparate information, especially on certificate-of-origin declarations of seafood brought into China by the U.K., Denmark, U.S., Iceland, Norway, and The Netherlands. The report highlighted the importance of import documentation and the finding of significant lack of information on routine audits of traceability practices in the seafood sector. The study showed that other than livestock, there is a lack of traceability in other sectors and that it is important to have uniform requirements on products being imported from different countries.

The GFTC is currently in the midst of a major seafood traceability research project to better understand the linkage between traceability and improved business performance, reduction of food waste, and enhancement of consumer perceptions of seafood. The results of the project will help to inform seafood businesses and consumers on the importance and value of traceability as a tool for public good and commercial benefit.

Best Practices Guidance
There is a need for standardization and harmonization of traceability requirements across all food sectors to preclude development of specialized rules, mandates, and exceptions for specific industry segments.

A challenge is a gap between the increasing regulatory requirements and the feasibility of industry implementation. Uniform traceability requirements and standards can provide regulators with tools to resolve food-related emergency investigations with greater efficiency and effectiveness. However, the industry needs sufficient flexibility to allow adoption of the requirements for specific foods and within their business operations.

Regulatory and industry initiatives have proposed approaches for resolving this challenge. Most of these are being led by the industry and industry associations, and involve developing guidance documents focused on their specific food product categories (Bhatt et al. 2012). In reviewing the global regulatory landscape and industry implementation, the GFTC found that there does not appear to be a single document addressing all food sectors in such a way as to identify the uniform data requirements that would benefit all stakeholders (farmers, processors, distributors, retailers, foodservices) in identifying Critical Tracking Events (CTEs) and Key Data Elements (KDEs) in their operations.

As a step toward consistent and uniform requirements for food traceability, the GFTC launched a project to provide traceability best practices. The goal was to assess current food traceability best practices in selected industry sectors and create a reference document based on the principles of CTEs and KDEs that could serve as a guide for government regulatory authorities and industry stakeholders in moving forward in using uniform data gathering and record keeping requirements.

The original CTE-KDE framework developed by IFT was updated to be more readily applicable across different food sectors (since the original study only focused on tomatoes and a processed food with peanuts, spices, and chicken) (Bhatt et al. 2013), and was then applied to each of the six food sectors. An analysis of similarities and differences in applying the updated framework across these six food sectors was conducted to determine applicability.

Despite the differences between the six food sectors in terms of product characteristics and supply chain systems, we  found similarities among the various sectors. For example, in terms of supply chain structure, the produce sector does not have raw material/bulk material suppliers, but it does have packers and re-packers. The meat and poultry sector also has packer and re-packer operations.

There are some differences with the CTEs among the six sectors as one might expect. Dairy and processed food sectors do not have a “creation” CTE which includes harvest, hatch, growth, and catch events. Bakery, meat/poultry, and processed food sectors do not have “separate/sort” events; however, dairy, produce, and seafood do. Fresh produce is the only sector which does not have “process/production” event (Table 2).

The KDE requirement is quite uniform across all six sectors (Table 3). We found that KDEs are applicable to all sectors which should enable regulators to create more uniform record keeping requirements. There are differences in some data gathering and retention in the events which are not critical for traceability; these are used mainly as recordkeeping for food security, sustainability, or quality management requirements and not strictly for traceability. 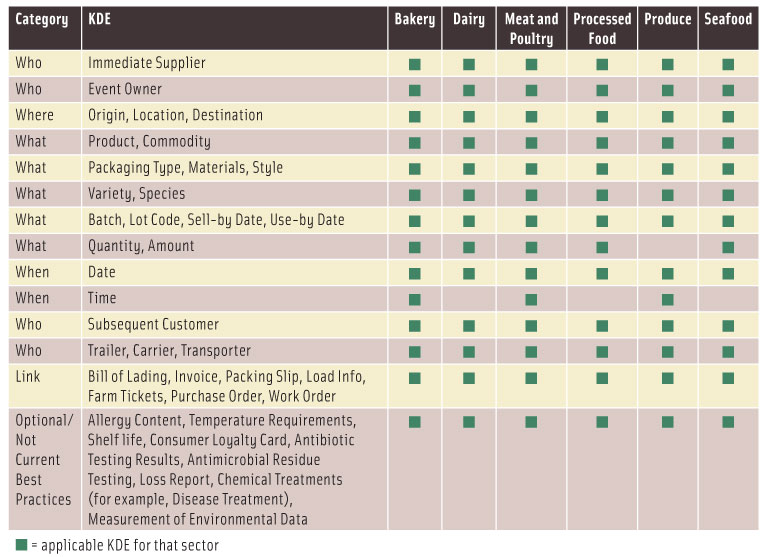 The update of the original framework of CTE/KDE (Table 4) has an additional, new CTE, “creation”. Also, detailed information requirements are included for each event: creation, transportation, transformation, and depletion. The KDEs clearly illustrate the Who, What, Where and When (4W) and Link (1L) for each CTE. The updated framework (Version 2.0) simplifies the structure by grouping the KDEs under one of the 4W and 1L). This was done with the intention of helping regulators and industry stakeholders to more clearly see and understand the data that must be gathered, stored, and shared.

It was an encouraging finding that the generic list of CTEs and associated KDEs are applicable to all six sectors evaluated in this project. While some particular events do not occur in some sectors, and some KDEs are not collected for specific sectors, and although nomenclature may differ from one sector to another, from a traceability perspective food is handled and distributed in a fairly consistent manner. This provides the opportunity to develop more uniform recordkeeping requirements across all foods  rather than using a piecemeal approach. It also provides insight to industry stakeholders with regards to the current best practices amongst their peers, thus enabling them to gain a deeper appreciation of how they may implement good traceability practices.

This guidance addresses one of the most important and significant data gaps that regulators face when developing new policies: “What is the industry capable of currently and how much can realistically be asked of them?” As regulators around the world work to develop new requirements for food traceability, this document is intended to be a blueprint for what is practical for industry compliance. Whether a new food system stakeholder is looking to build or participate in a traceability system, or a large multinational corporation would like to update existing traceability systems, or other stakeholders in the food industry such as distributors, technology providers, or retailers would like to implement traceability practices, this guidance document can also provide valuable context and content.