Drying is one of the oldest methods of food preservation, most likely discovered as solar drying of fruits and grains and, later, drying of meat by fire. With so much history, it has had a chance to diversify over the years, so that today there are many types of dryers and applications.

Drying Basics
Drying involves the removal of water from food (or other substances) by converting water to vapor. This conversion requires energy—the heat of  vaporization, about 1,000 BTU/lb of water. Removal of the water vapor from the residual solid or liquid food also involves mass transfer, first through the food and then to some form of moisture sink. The moisture sink may be the atmosphere, to which the vapor is exhausted, or it may be a condenser or adsorbent.

Some other influences on the variety of drying processes include limitations on the conditions the food can tolerate; fragility of some foods; physical form of the food; availability of energy sources; limitations on discharge of vapors; cost of equipment; space availability; and end use of dried food.

These qualitative factors then suggest some of the variations that can be tried to optimize drying processes. For example, smaller particles or droplets generally dry faster than larger ones. However, small dry particles may be difficult to recover and may be troublesome to use because of dustiness or poor flow properties. Thus there may be an optimum particle or droplet size for a particular application.

Sometimes very fine dry particles are agglomerated, that is, caused to stick together, in order to make more manageable particles. This makes for a more complex process.

Temperatures may be limited by discoloration of foods or even by combustion. Certain types of dryers are prone to internal fires when they are overheated. Sometimes a little color development is desirable, but in many cases, a light color is preferred. High heat can also affect flavor and may cause loss of valuable constituents.

High air velocities generally improve drying rates, but these may be limited by blowing of dried foods off a conveyor belt. As food pieces dry, they become lighter and easier to move in a high velocity air stream.

In flash dryers for starch, particles are suspended in hot air and, when they become light enough, are swept out of the dryer as finished product. In contrast, baking ovens for cookies and crackers have only a single layer of products because they start as soft dough pieces. (Baking, roasting, and toasting are all basically forms of drying, and thus they are subject to the same influences.)

Dryer Variations
The most common food dryer is a conveyor or tunnel dryer using hot air as both a heat source and moisture removal vehicle. Tunnel dryers can have a single pass or multiple passes to make better use of floor space. Air flow may be concurrent, counter current, or cross flow. Normal practice is to recycle some of the exhaust air to conserve energy. Enough air must be exhausted to discharge all the moisture that is removed from the food. Large tunnel dryers can take a while to reach steady state because drying times may be multiple hours and they should be filled to achieve stable operation. A dryer on which I worked in Uzbekistan had five passes and a belt length of about 100 meters. It required several tons of food just to fill it, and it took over three hours to dry chopped peppers.

Tunnel dryers are often used for pet foods, breakfast cereals, fruits, and vegetables and for baked goods. They usually have zoned temperature and air flow controls and should be designed for ease of cleaning. 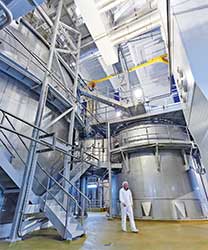 Spray dryers are used to convert liquids to powders by injecting droplets into hot air at the top of a large tower. Air flow can be concurrent or countercurrent, and some spray dryers discharge into a separate fluidized bed for finish drying. Dry particles are collected in cyclones and bag filters. Small particles dry faster but can be lost in collection and can plug filters. Particles that are too large may drift to the tower walls and stick there, lowering yield and requiring premature cleaning.

Vacuum dryers increase drying rate by lowering pressure, which improves mass transfer. However, lower pressure also means lower temperatures, which may hurt drying rate while preserving delicate properties of some foods. Freeze-drying is one version of vacuum drying in which water is first frozen to ice and then sublimed, that is, converted directly to vapor from the solid phase. The benefit is that freeze-dried foods do not shrink during drying, as they would if the water is liquid, and the low temperature preserves flavor and other delicate features, such as pharmaceutical potency.

Foam mat drying takes advantage of the thin layers of liquid in a foam to gently dry fruit juices and dairy products. A foaming agent may need to be added, though many foods foam naturally. Vacuum foam drying deposits a foam layer on a belt in a chamber. It uses a lock system to collect dried powder and enable it to be removed while drying continues. I helped operate such a dryer for whole milk in my first professional summer job.

Drum dryers spread a liquid or slurry on the outside of one or two steam-heated cylinders and then scrape off a dried film after one rotation. Potato flakes are made on such a dryer. The cylinders need to be replated periodically as the metal coating wears from the scraping.

A rotary dryer transports particulate foods through a cylinder with hot air flowing concurrently or counter-currently. With concurrent flow, dried particles can be carried out with the exiting air. Rotary dryers are rugged and are often used for agricultural materials, such as alfalfa for animal feed.

Dryers can be batch or continuous. Vacuum dryers are often batch, while tunnel dryers, rotary dryers, and drum dryers are continuous. In addition to hot air as an energy source, dryers can use the sun, electric or surface combustion radiant heaters, or microwaves. The advantage of microwaves is that the energy focuses on where the water is located and is not directly affected by the insulating dry layer. Microwave energy, however, is expensive because the tubes supplying it are expensive and wear out. In one case on which I worked, I advised the client to operate the microwave source below its rated capacity to prolong the tube life.

Solar heating or supplementation makes good sense in developing countries where sunlight is strong. Some crops, such as raisin grapes and tomatoes, have been dried simply by placing them on the ground in the fields after harvest. Obviously, they are also exposed to dust and pests and so require cleaning before packaging. More controlled solar dryers use focused sunlight to heat air in a chamber. The chamber also protects the drying material against dew that might fall at night.

An unusual and very gentle dryer I observed in Haiti used ambient air that was dehumidified by refrigeration. Drying was quite slow—24 hours for thin slices of fruit—but color and flavor were good and almost pure water was produced that could have been recovered in a place that often lacks clean water. For that application, a more conventional dryer that used some source of energy would be more productive.

A technique that made potato granules practical, and might have other applications, is to add some dried product to a wet feed to increase solids content and make the resulting mixture amenable to fluidized bed drying. Finally, osmotic drying uses strong solutions of sugar, salt, or other substances to draw out water from fruits and vegetables, thus creating intermediate-moisture foods that are shelf stable and palatable.