This month’s Processing column on the theme of “How Is It Processed?” focuses on yogurt. Yogurt is known for its health-promoting properties. This column will provide a brief overview of the history of yogurt and the current market. It will also unveil both traditional and modern yogurt processing techniques. 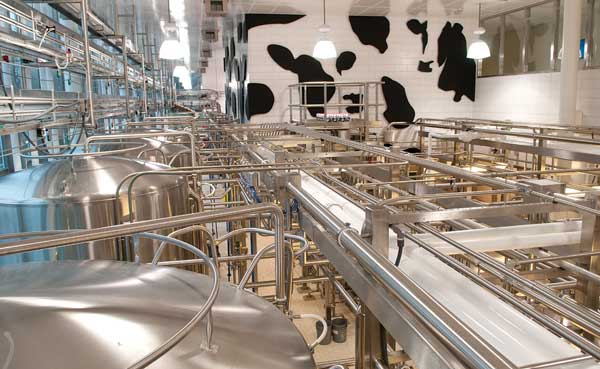 Yogurt’s History and the Market
Yogurt is a fermented milk product with a custard-like consistency that differentiates it from other fermented milk products. Yogurt is thought to have originated in Mesopotamia thousands of years ago. Evidence has shown that around 5000 B.C. domesticated goat and sheep milk was stored in gourds in warm climates and formed a curd, which was an early form of yogurt produced by naturally present bacterium. It is only in the last 30–40 years that yogurt has become popular in the United States.

The FDA Code of Federal Regulations defines yogurt as the food produced by culturing cream, milk, partially skimmed milk, or skim milk alone or in combination with a bacterial culture that contains the lactic acid–producing bacteria Lactobacillus bulgaricus and Streptococcus thermophilus. There are many types of yogurt, including low fat, no fat, creamy, Greek, drinking, bio-yogurt, organic, frozen, and even yogurt for babies.

According to a survey by DSM Food Specialties, yogurt represented a global market of $69 billion in 2014. The largest markets by value are China ($9 billion) and the United States ($7 billion), and the top markets by per capita expenditure are countries in Europe. Growing desire for yogurt is highest in China, where the annual market growth is 15.6%. Current consumption is low, however, with only 6.5% of Chinese consuming yogurt on a daily basis. France and Turkey are the countries that have the highest yogurt consumption, with 57% and 52% of their respective populations eating yogurt every day. Twenty percent of Americans eat yogurt every day. An average American eats 13 pounds of yogurt each year, compared with Europeans, who eat 40 pounds of yogurt annually. In addition, Americans typically eat their yogurt for breakfast, which differs from Europe where yogurt is more commonly eaten mid-day or in the evening. In China, the majority of people drink their yogurt, with only 11% eating it with a spoon.

Yogurt Processing
• Modification of Milk Composition. Yogurt processing begins with modification of the incoming milk composition. This process typically involves reducing the fat content and increasing the total solids in the milk. A standardizing clarifier and/or a separator (centrifuge) is used to separate fat from milk and reduce the fat content. Alternatively, milk fat can be added to skim milk to obtain the desired fat level. Depending on the type of yogurt, the final fat content ranges from 1% to 10%. The final fat content affects yogurt consistency and viscosity. The milk fat content also affects the fermentation rate. From the separator, the milk is placed in a storage tank. It is then tested for fat and solids content. The solids content of the milk is then increased to around 16%, with 11%–14% of that being solids-nonfat (SNF). SNF components include lactose, protein, and minerals. SNF in yogurt typically ranges from 9% to 16%. Traditionally, either some water is evaporated off of the milk to increase the solids content, or concentrated milk, milk powder, whey protein concentrate, or casein powder is added to accomplish that objective. More recently, ultrafiltration and reverse osmosis technologies have been used to increase the SNF. Increasing the solids content increases the firmness of the yogurt and improves its nutritional value and stability. Increases in SNF also increase the duration of the fermentation process. After the solids are adjusted, stabilizers such as pectin and gelatin are frequently added to increase yogurt body and texture, as well as to prevent syneresis in the final product. Sweeteners can be added to improve flavor and consumer appeal. 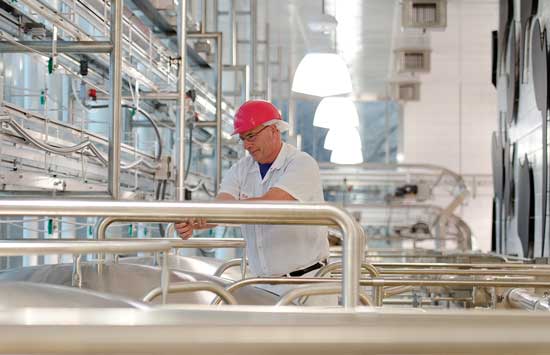 • Fermentation. After the milk is pasteurized and homogenized, it is cooled to 40°–44°C and inoculated with a lactic acid–producing culture. During this stage, the curd is formed and the yogurt’s textural characteristics and taste are developed. For a fermented product to be labeled as yogurt it needs to contain two live bacterial strains of Lactobacillus bulgaricus and Streptococcus thermophiles. Ratios of 1:1 are commonly employed. In addition, yogurt starter cultures may contain other microorganisms like Lactobacillus acidophilus, Lactobacillus casei, Lactobacillus helveticus, Bifidobacterium bifidus, Bifidobacterium infantis, and others. Cultures are typically added at concentrations of about 2%. The yogurt is then held at this temperature for three to four hours while the incubation process takes place. During this time, the lactose is reduced, proteins aggregate, and flavor compounds develop.

Depending on the type of yogurt, the inoculated milk is either incubated in a hygienically sealed stainless steel, stirred vessel or consumer-sized sterile packages to incubate in a temperature-controlled environment. Stirred yogurt is fermented in bulk and then poured into final consumer packages. During the process, the final coagulum is broken by the stirring prior to cooling and packaging. As a result, the texture of stirred yogurt is less firm than set yogurt. Drinking yogurt is processed similarly to stirred yogurt. Greek yogurt or concentrated yogurt is processed in the same manner as stirred yogurt. Following the breaking of the coagulum, Greek yogurt is strained through a filter. The straining process separates out some of the whey, resulting in a thicker, higher-protein yogurt. Alternatively, the yogurt can be concentrated by boiling off some of the water under vacuum, or the yogurt can be manufactured from evaporated milk. Set yogurt, known as French yogurt, is allowed to ferment in the container it is sold in and has a firm gel texture.

Lactic acid level (or pH) is used to determine when the yogurt is ready for cooling, which is often accomplished quickly by blast chilling to stop the fermentation process. A value of at least 0.9% acidity and a pH of about 4.4 are the current minimum standards for yogurt manufacture in the United States. To attain a yogurt with a pH of 4.0, the cooling process should begin when the fermented milk reaches a pH of 4.3–4.4. To extend the shelf life of the product, yogurt can be heat treated after culturing is complete to destroy viable microorganisms. Lastly, flavors are frequently added to chilled fermented yogurt. This is referred to as Swiss-style yogurt.

Alternatively, sundae-style yogurt can be obtained when the fruit or fruit flavoring is added to the bottom of the consumer package.

Recent Innovations in Yogurt
Recent research has focused on development of new flavors, increased nutrition, and longer-lasting yogurt products. Icelandic skyr strained yogurt and goat milk yogurts are a few novel yogurt products. Development of savory yogurts through the addition of spices, savory additives, espresso, and vegetables is another new trend, as is inclusion of grains such as oats in yogurts. High-protein Greek yogurts and probiotic yogurts with low or no lactose are also gaining in popularity. In addition, research on new processing innovations to obtain longer-lasting yogurts is underway, as is research on characterizing and improving the nutritional benefits of yogurt. Ancient people called yogurt the “food of the gods,” and today yogurt continues to have an outstanding reputation and a promising future as a healthy processed food product.