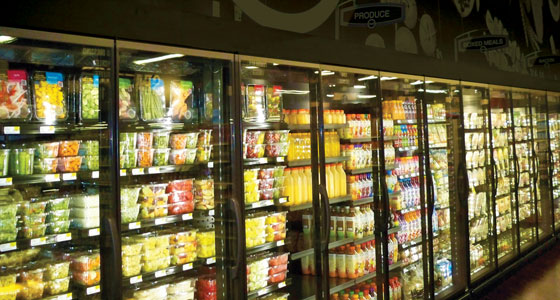 Subway’s advertising is focused on the fact that its sandwiches feature fresh vegetables, hand-cut daily in its stores. Fresh-squeezed, cold-pressed juices are commanding unprecedented premium prices. And “made from fresh ingredients” claims appear on nonperishable items throughout the center store.

Examples like these reflect the fact that more and more, consumers are gravitating toward fresh, and the food industry is re-centering around less-processed and more-natural fare. This movement is driven by consumers’ preoccupation with health and wellness, the strength of the immediate consumption trend, and shoppers’ interest in higher-quality foods.

On the matter of health, three-quarters of consumers believe that fresh foods are healthier (Technomic, 2014a). Half of shoppers report they’re now buying fewer processed foods (FMI, 2014a).

There’s no denying the importance of the immediate consumption trend. In 2013, 15% of all eating occasions involved foods/beverages eaten within an hour of purchase. For Millennial eating occasions, that total was 40% (Hartman, 2013).

When eating alone, consumers are more likely to opt for fresh over frozen meals. In 2013, nearly half (47%) of all eating occasions were solo (Hartman, 2013). Three-quarters of consumers cite freshness as important or extremely important when choosing a snack—up 4% vs 2013 (FMI, 2014a). Half (53%) of all eating occasions last year were snacks (Hartman, 2013).

In addition to snacking frequently, consumers also are embracing cooking from scratch. In 2013, half (50%) of consumers cooked more from scratch, using fewer convenience products in order to save money, up from 47% who said they did so in 2012 (IRI, 2013). Forty-four percent of shoppers are buying more fresh ingredients, up from 34% two years ago. And 78% of consumers are now confident in their scratch cooking ability (FMI, 2014a, b).

Nearly nine in 10 adults (87%) would be more likely to purchase and pay more for a food or beverage described as fresh (Technomic, 2014a). Premium/fresh-format stores that focus primarily on fresh and ready-to-eat foods are among the most successful supermarket formats. In fact, fresh-format stores are projected to have the highest growth rate through 2018 (FMI, 2014b).

High-quality fresh produce and meat departments are the reasons that 95% and 91% of adults, respectively, decide to shop at a specific grocery store (FMI, 2014b). Local/seasonal ingredients, grass-fed, free-range, farm-raised, homemade, and made-from-scratch descriptors are very strongly tied to fresh (Technomic, 2014a). 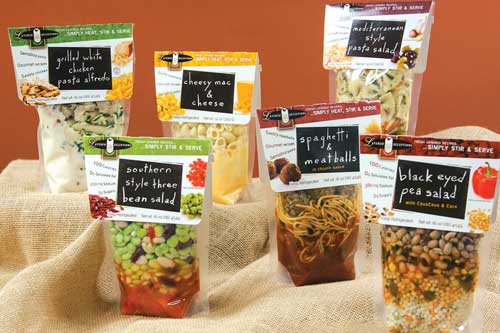 Trips per household to convenience stores and drug stores for perishables increased 5% vs a year ago, and trips to dollar stores for perishables were up 4%. Nielsen predicts that grocery stores will account for 64% of retail fresh food dollars, mass/supercenters 15%, club stores 12%, and the remaining market formats 8% by 2016.

When it comes to healthy, simply being fresh is no longer enough. Savvy marketers are broadening their appeal by touting claims (e.g., fresh 100-calorie portion packs) or repositioning their products as naturally high in protein.

With the frequency of one-pot/crockpot meals increasing 22% over the past five years, it’s not surprising that casseroles and less expensive cuts (e.g., brisket) are gaining in popularity (FMI, 2014c).

One in three meal preparers are cooking more fish/seafood than they were five years ago. Twenty-eight percent of consumers cook fish/seafood once a week for dinner, and 29% do so two or more times (FMI, 2014a, c).

Dining Deli-Style
Sales in the $26 billion fresh prepared foods sector are projected to outpace the industry with a 6% to 7% annual growth rate through 2017 vs 2% to 3% for retail grocery food/beverages and 3% to 4% for foodservice (A.T. Kearney, 2013).

IRI reports that pimento, mascarpone, Colby blend, queso quesadilla/Chihuahua, and queso panela were the natural cheeses with the fastest-growing sales (IDDBA, 2015). Cheeses on restaurant menus with the largest sales increases in 2013 included Taleggio, up 38%; burrata, +22%; and pecorino Romano, +11%. Hispanic Cotija, with sales up 45%, and queso fresco, +16%, were the fourth- and sixth-fastest-growing on menus overall (IDDBA, 2015).

Burgers, deli sandwiches, chicken breast hoagies, and tacos/burritos are the favorite luncheon sandwiches away-from-home (Technomic, 2014b). Banh mi, lobster roll, muffuletta, pulled pork, brisket, torta, shrimp po boy, and Cuban were among the sandwiches with the fastest-growing sales in restaurants in 2013. Tilapia, fried eggs, slow roasted and smoked pork, and fried oysters are among the sandwich proteins with the greatest increases in popularity (Datassential, 2014).

Half of adults prefer their sandwiches toasted or grilled, up from 36% in 2010; 71% would order more Italian sandwiches, 66% Mexican, and 37% Mediterranean, if available (Technomic, 2014b). Gruyere, goat, Gouda, fontina, queso, brie, and fresh mozzarella were among the sandwich cheeses that showed the most sales growth in restaurants in 2013; yogurt, bourbon, mint, garlic/chipotle/pesto aioli, tzatziki, and wasabi were emerging toppings (Datassential, 2014). 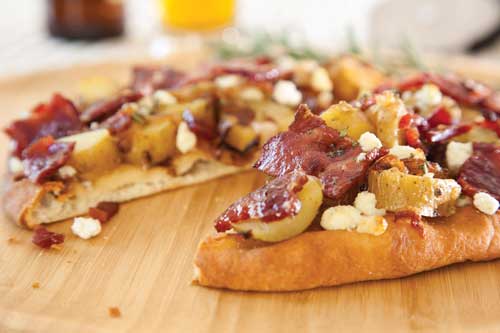 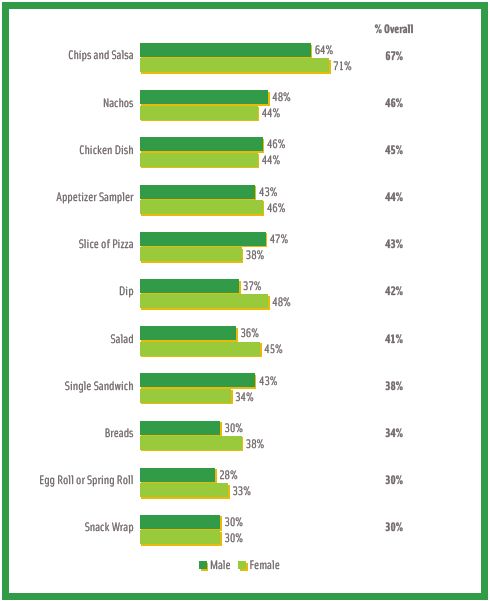 Only 4% of purchases in the deli involved breakfast items, according to ICC Decision Services (IDDBA, 2015). Flatbread/panini breakfast sandwiches, Cubano sandwiches, breakfast pizza, and parfaits were among the fastest-growing early morning fare in restaurants (Datassential, 2014).

One-third of adults would be willing to pay more for fresh soup if it delivered a full serving of vegetables, was heart healthy, and/or high in protein. Interest in Asian-style and tortilla soups is growing (Technomic, 2014c).

Salsa is the dip most likely to be ordered away from home; 42% of consumers would order seafood dips, 42% spinach/artichoke dips, and 40% cheese dips (Technomic, 2013b). Hoisin, sweet chili, and salsa verde were among the appetizer sauces with the fastest-growing sales in restaurants in 2013 (Datassential, 2014).

Growing Sales
According to the Produce for Better Health Foundation, produce consumption is about the same as it was five years ago; 45% of fruits and vegetables are consumed in fresh form (Pivonka, 2014).

Sales of single-serve fresh produce snacks are soaring, led by celery, +13% in 2013; cucumbers, +11%; apples, +9%; peppers, +7%; berries/tomatoes, each +6%; and carrots, +4% (Wyatt, 2014). See Favorite Away-from-Home Snacks (Based on responses consumers gave when asked which snacks they purchased at least once every 90 days and were told to check all that apply)

Branded fresh fruits and vegetables, with sales up 14% and 12%, respectively, for the same period, is another explosive produce trend (Strailey, 2014). Green Giant Fresh has introduced a line of fresh herbs.

Less than 50% of American adults now drink milk, driving 2013 milk sales to their lowest point since 1984 (Anon., 2014). Protein-enriched milks/shakes, flavored milks, and milk from pasture-grazed cows are among the bright spots in fluid milk. 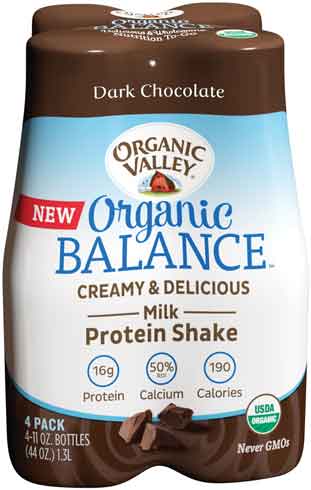 Aussie, Bulgarian, European, and Vietnamese-style yogurts are among the new yogurt styles. Tarté Asian yogurt, by Tarte Foods, is lighter in texture, less sweet, and higher in protein than other yogurts. Greek yogurt now accounts for 44% of U.S. yogurt sales (Kennedy, 2014a).

Cream on top, rich whole milk, and full-fat yogurts are returning to the marketplace. Stonyfield Farm’s Smooth & Creamy is a whole milk yogurt. Dannon is broadening its reach into the dessert category with its Creamery brand pudding- and cheesecake flavor–inspired dairy desserts. Stonyfield’s spoonable sweet cheese, Petite Crème, is modeled after fromage blanc in France and eaten like a yogurt.

Drink Up
Refrigerated juice sales were relatively flat for Y/E May 10, 2014. Vegetable juice/drinks, cider, cranberry juice/drinks, and other juices also posted gains, according to Nielsen (IDDBA, 2015).

Pomegranate, celery, cranberry, carrot, apple, and pineapple were among the juices with the fastest-growing sales in restaurants in addition to juices described as natural, organic, or fresh-squeezed and those containing ginger (Datassential, 2014).

Dawn Foods’ new Vortex cakes have a bottom layer of brownie or cookie and a top layer of cake with buttercream icing in between.

With more than half of consumers trying to get more protein in 2014 and breakfast consumption shifting from high-carbohydrate foods (e.g., cereal, toast) to high-protein foods/drinks, protein-packed breads and breakfast bakery items are a very big idea (Jargon and Gasparro, 2014).

Technomic. 2013b. The starters, small plates and sides report.

Technomic. 2014c. The left side of the menu soup and salad report.