Microwaves are a common appliance in many households. In the United States, microwave heating is the third most popular domestic heating method for foods (Sloan 2013). Microwave heating is also a commercial food processing technology that has been applied for cooking, drying, and tempering foods. Its use in pasteur-ization, as well as for sterilization of foods, is more limited. This column will review various microwave heating applications in the food industry, as well as the basic principles of the technology. 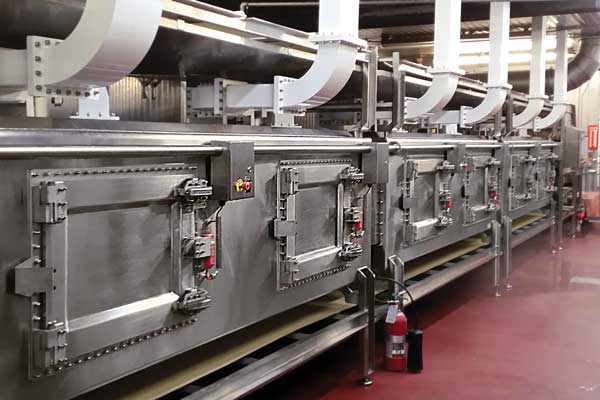 The Basic Science of Microwave Heating
Microwave heating takes place due to the interaction of electromagnetic radiation with the dielectric properties of foods. Microwave wave-lengths cover the range of the electromagnetic spectrum from 300 MHz to 300 GHz. Only frequencies of 2,450 MHz and 915 MHz are permitted for use in the United States. Domestic microwave ovens operate at 2,450 MHz, and industrial systems use either 2,450 MHz or 915 MHz. Microwaves can be used to process any dielectric material, and most food products are dielectric.

Foods such as water contain polar water molecules, and these molecules have dipole moments, positive and negative charge centers that do not coincide. The polar molecules rotate continuously to align with the electromagnetic field as the field is alternated. Friction is created between the molecules, converting electromagnetic energy into heat and increasing the temperature of the food. Dissociative ions in foods also produce heat, through ionic conduction, whereby the ions oscillate forward and backward in the food, creating friction and heat. As heat is generated, it conducts through the food. In liquid foods, heat is also transferred through convection. It is important to remember that dielectric properties of the food are dependent not only on temperature and frequency, but also on the density, structure, composition, and moisture content of the food.

Microwave heating is a radiative process. Electromagnetic radiation is generated in oscillator tubes, such as magnetrons or klystrons, and is radiated into a closed chamber containing the product. The heat and power generated is directly proportional to the square of the field strength, the frequency, and the loss factor. The loss factor is related to the efficiency with which the electromagnetic radiation is converted to heat. A large loss factor indicates the food will readily heat with microwave heat. The penetration depth is also important. It is inversely proportional to frequency. Thus deeper penetration is obtained at lower frequencies and higher frequencies result in more surface heating.

Advantages of Microwave Processing
Microwave heating has several advantages. It frequently results in significant reductions in thermal processing times (often requiring only one-quarter of the time used for conventional heating), resulting in more fresh-like taste and texture in final food products. Nutrient retention is also high. The ability to instantaneously turn the process on and off is another advantage, one which allows for precise process control and optimal energy usage. Microwave heating can be used post-packaging, benefiting manufacturers by reducing spoilage, eliminating refrigeration costs, and improving safety. Additional advantages of microwave systems include a cleaner work environment and reduced use of plant space. The major disadvantage of microwave heating is nonuniform temperature distribution resulting in hot and cold spots in foods. 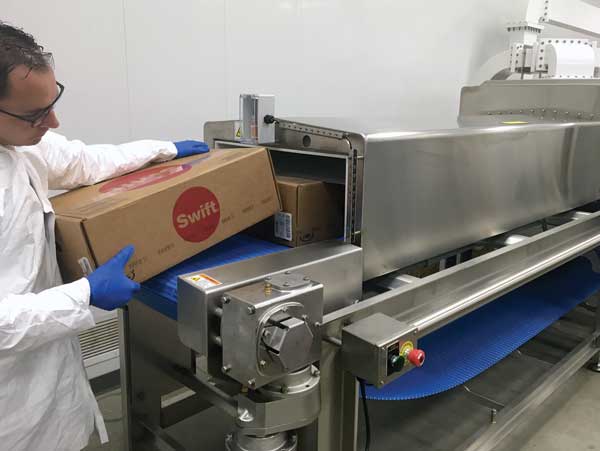 Equipment Design
A simple microwave system consists of four main components. The first is a magnetron that converts electric energy into microwave energy. The second component is a resonance cavity for holding and heating food. The third is a waveguide that leads the microwaves from the magnetron to the cavity. Finally, there is the control system.

The chamber is typically constructed of highly reflective walls so the radiation is reflected back and forth until it is absorbed in the product. In addition, there is usually a wave deflector or applicator that distributes the radiation uniformly in the cavity. It is commonly located at the point where the radiation enters the cavity. There are two main types of microwave cavities. The first is a multi-mode cavity with dimensions similar to or larger than the microwaves, allowing several standing wave patterns to simultaneously form in the cavity. These types of chambers are typically planar and contain a belt through a tunnel. The second type of cavity is called a single-mode cavity, and it is present when at least one dimension of the microwave cavity is much smaller than the wavelength of the microwaves. These types of chambers are commonly cylindrical and allow for a single predictable and stable wave pattern. These types of systems are used for continuous in-pipe processing of pumpable foods.

Commercial Applications
Commercial applications of microwave processing include the following.

• Cooking. Continuous microwave cooking systems are used to cook meats commercially. Bacon precooking and crisping is one of the most common applications of industrial microwave processing. Many fast food restaurants are commercial users of this technology. Microwave cooking is also used as a booster prior to an impingement oven for fully cooked, bone-in chicken. Conventional cooking can leave blood spots or cause overcooking on the exterior of meat, whereas microwaves penetrate to begin internal cooking more quickly, reducing cooking time by as much as 50% and increasing throughput by as much as 30%. Boneless meatball cooking is another application of microwave boosters.

• Drying. Microwave drying is very efficient and is commercially used in applications for snacks, as well as spices and other ingredients. It is also used to finish dry pasta and instant noodles. Industrial Microwave Systems estimates that microwave use as a pre-dryer or post-dryer can increase overall production capacities by 25%–33% and can produce a return on capital investment within as little as 12–24 months.

• Tempering. The most popular application of microwaves in food processing is for tempering. Microwaves rapidly generate heat volumetrically, and defrosting is achieved in minutes rather than hours/days, even for large product blocks. Tempering can also be performed directly inside the package. This process results in a significant reduction in drip loss while minimizing product deterioration due to bacterial growth, making it ideal for many defrosting processes. Microwave heating is commonly used to temper deep-frozen beef, pork, poultry, and fish. The photograph on page 64 shows microwave tempering of frozen beef. The start temperature from the freezer is -18°C to -20°C, and the meat was tempered to -2°C during these trials.

• Sterilization. Conventional sterilization processes, like retorting, are generally carried out by treating products with drastic heat treatments, resulting in loss of product quality. Microwave sterilization offers the potential for shorter process times and improved quality. A few years ago the U.S. Food and Drug Administration (FDA) approved a continuous microwave process to produce high quality, shelf-stable sweet potato puree. In 2009, Industrial Microwave Systems received the Food Technology Industrial Achievement Award for this technology. This was the first FDA-approved use of continuous flow microwave sterilization for low acid food. The process was developed through collaboration with the U.S. Dept. of Agriculture and the Dept. of Food Science at North Carolina State University. Yamco, Snow Hill, N.C., now produces not only sweet potato puree, but spinach, pumpkin, butternut squash, and carrot purees using this technology.

Microwave-sterilized packaged products are commercially available in Europe. These include pasta dishes, sauces, and rice dishes. In the United States, however, there are no microwave sterilized, packaged, low acid, shelf-stable food products currently on the market. WSU leads the Microwave Sterilization Consortium, which consists of numerous food companies, packaging and equipment manufacturers, and educational and government research institutions that are working toward FDA acceptance of microwave sterilization processing of high quality, safe, and shelf-stable packaged meals.

What’s Ahead for Microwave Processing
Continued expansion of applications for microwave processing of foods is anticipated during the years ahead. New dielectric property data on foods and more powerful mathematical models are critical to new applications. Ongoing research on microwave process design and validation are taking place to support additional FDA approvals for microwave pasteurized and sterilized foods. The potential of microwaves to improve nutrient retention in final food products and reduce the need for added salt is also being investigated. In many ways microwave processing remains in its infancy, and it is expected to gain a stronger presence in the food processing industry during the years ahead.