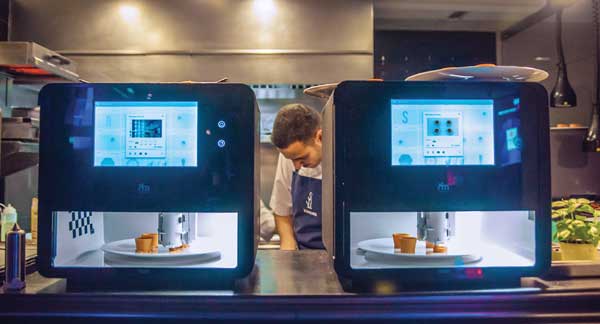 3D food printing, also known as food layered manufacture (FLM), is an exciting new method of digital food production that applies the process of additive manufacturing to food fabrication. In the 3D food printing process, a food product is first scanned or designed with computer-aided design software and produced by splitting the designed object into thin layers. The layer template directs a digitally controlled XYZ-robotics system to construct the item in consecutive layers from the bottom up. The layers are fused together by phase transitions or chemical reactions, either during construction or in a separate post-construction step. The 3D food printing process can also allow the consumer full control of shape, color, flavor, texture, and nutrition for food customization.

Advantages
3D food printing is most suitable for high-value, low-volume food fabrication with a strong emphasis on customized manufacturing that offers the following advantages. Three-dimensional printing can be used to produce repeatable novel food designs and structures that would be difficult or even impossible to achieve manually or with other methods. This process makes it possible to create novel textures and replicate food textures using different materials. For instance, researchers from Cornell University combined just two hydrocolloids, xanthan gum and gelatin, to produce printing materials that could recreate a wide range of food textures. 3D food printing has the potential to manufacture novel food forms with customized shape, texture, color, flavor, and nutrition that can be extended to the industrial culinary sector. The 3D technology can also be healthy and environmentally friendly because it helps transform alternative ingredients like proteins from algae, beet leaves, or even insects into tasty products with familiar designs.

Technologies
Several technologies have been used for 3D food printing, with the two most common methods being controlled deposition and controlled fusion. Controlled deposition can be considered an adaptation of fused deposition modeling into the sector of food design. This technology consists of extruding pastes, gels, or molten materials from extrusion nozzles or inkjet-type print heads. The extrusion nozzle is guided within the Cartesian coordinate space (x-, y-, and z-axes), and the rate of extrusion is regulated by computer-controlled motors. This enables the construction of defined geometries by deposition of a continuous stream or drop-on-demand (in the case of inkjet deposition) of the material in a layer-by-layer fashion. The viscosity of the material should be low enough to allow extrusion through a fine nozzle but high enough to maintain the structure after deposition. Binding might occur due to the rheological properties of the materials, solidification upon cooling, or formation of a hydrogel. The controlled deposition technology has been used to produce chocolate, cheese, cookie dough, pizza dough, rice starch, pasta, and meat paste.

The other most common technology is controlled fusion, where powders are selectively sintered to form complex shapes. After a layer of fresh powder is spread, a sintering source (hot air or infrared laser) moves along the X and Y axes to fuse powder particles into a solid layer. The unfused material is subsequently removed from the sample. Layering is achieved by covering the fused surface with a fresh layer of material before the next round of fusion. This is repeated until a 3D object is formed in the process. Controlled fusion can also be achieved by using a liquid binder instead of a sintering source. In liquid binding, a liquid binder is overprinted onto layers of powder and no phase change occurs during layer solidification. The Netherlands Organisation for Applied Scientific Research (TNO) uses controlled fusion to sinter Nesquik and sugar. CandyFab uses controlled fusion to sinter a bed of sugar.

Printing Food Materials
The printing materials for food applications have been classified into three groups. The first is natively printable materials, which includes all materials that can be extruded smoothly from a syringe—materials like hydrogel, cheese, cake frosting, hummus, and chocolate. Some natively printable materials are stable enough to hold their shape after deposition and do not require further post-processing. Other composite formulations, such as batters, might require a post-deposition cooking process.

The second group is traditional food materials—which includes fruits and vegetables, rice, and meat—that are not printable by nature but can be printable by adding hydrocolloids to create a material with the desired structural strength. For instance, agar has been used to create printing vegetables. Also, researchers from Cornell University in collaboration with New York’s French Culinary Institute and Dave Arnold successfully printed turkey puree and scallops using transglutaminase, an enzyme that catalyzes the formation of covalent bonds between lysine and glutamine residues in a calcium-dependent reaction. The proteins in the meat puree and scallops were enzymatically crosslinked, resulting in self-supporting hydrogels that can be cooked or fried after printing.

The third group is alternative ingredients, such as insects. London South Bank University is working on a project called ‘Insects Au Gratin’ that examines the nutritive and environmental aspects of insects for human food use. 3D food printing can be used to mix the insects with other food products to encourage their acceptance as a food source. In this project, edible insects are dried and ground into powder. The insect flour is then mixed with icing, butter, cream cheese, or water, gelling agent, and flavoring to form the right consistency to enable printing using the 3D printer nozzle. 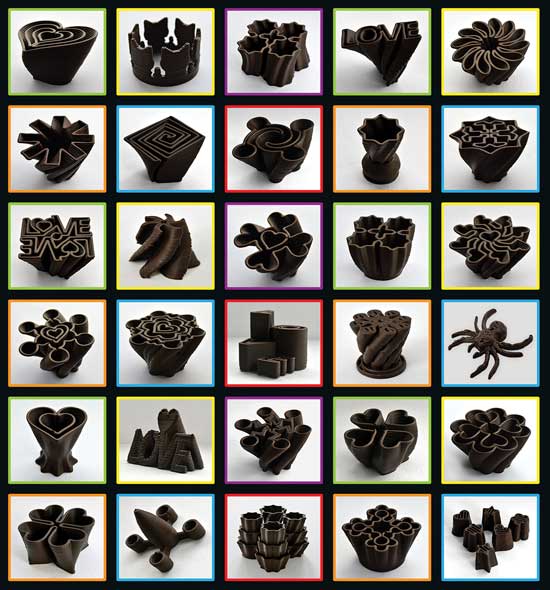 • The Italian pasta company Barilla in cooperation with TNO has developed the first 3D printer for pasta to create innovative pasta shapes not possible with industrial or traditional methods.

• 3D Systems has developed the ChefJet Pro 3D printer, which is based on solidification of edible powders such as sugar. The 3D printer makes three-dimensional creations out of sugar in a number of colors and flavors, including chocolate, vanilla, mint, sour apple, cherry, and watermelon. Recently, the company opened the 3DS Culinary Lab in Los Angeles to explore the potential of food printing and present several hybrid dishes made by top chefs.

• Natural Machines introduced Foodini in 2014. Foodini is now in production and available to select early-access customers. Foodini is a 3D domestic food printer that can be used with all kinds of ingredients, both sweet and savory. The 3D printer uses an open capsule model where the consumer prepares and places fresh ingredients into Foodini.

• BeeHex Inc. has designed and built a 3D printer for pizzas.

• In 2013, NASA announced it had started researching the possibility of food 3D printing technology to overcome the unique challenges of handling food for long-term space missions.

• TNO and Biozoon in the Netherlands have been awarded a European Union grant under the project “Performance: personalized food for nutrition of elderly” to develop a system that uses 3D food printers to create custom meals for elderly patients who are dealing with dysphagia. Meals can be adapted to the health and nutritional requirements of each patient by varying portion size and necessary nutrients. The 3D printed foods can replicate the texture of their nonpuréed counterparts by custom mixing of food materials and still have enough liquidity to dissolve quickly in the patient’s mouth.

The Future of 3D Food Printing
3D food printing is a new technology that supports product innovation, on-demand production, and customization. The technology enables consumers to eat fresh and healthy dishes, create new eating experiences, and customize food preferences in shape, color, flavor, texture, and nutrition. However, the technology is still in its development stage. The main challenges include process productivity, flexibility in production, and product innovation and functionality. There are currently only a few active research groups exploring this technology. This novel technology is expected to be significantly improved during the years ahead through better understanding of food material properties and effects of food variability on end products, leading to commercial design and production of novel food products with increased production rates and functionality.