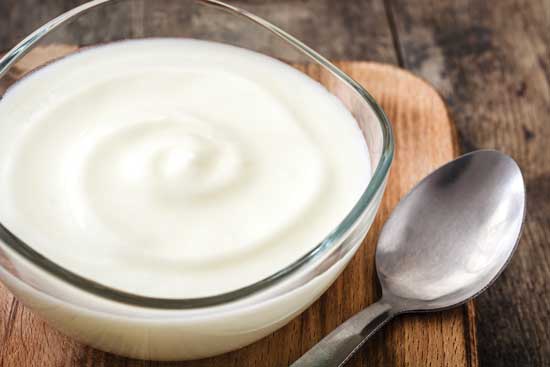 Probiotics can affect yogurt flavor
Many consumers are concerned with gut health, and boosting already-beneficial yogurt with added probiotics is one way companies are seeking to respond to demand for gut-friendly fare. According to a Journal of Food Science study, though, the type of probiotic chosen can affect the overall flavor profile of the product.

In the study, researchers cofermented yogurt using traditional starters and four probiotics: Lactobacillus acidophilus, Lactobacillus plantarum, Lactobacillus rhamnosus, and Lactobacillus casei. Probiotic strains with a low growth rate did not significantly affect the bacterial population dynamics, acidity, or organic acid content during fermentation and storage, but those with a high growth rate enhanced postacidification, which was particularly seen with L. casei.

EU rules on plant ‘milk’
The Court of Justice of the European Union (EU) ruled that plant-based dairy alternatives can no longer be called “milk,” “cream,” “butter,” “cheese,” or “yogurt” because these terms are reserved by EU law for animal products. The ruling was a response to a case between the German company TofuTown, which produces and distributes vegetarian and vegan foods, and Verband Sozialer Wettbewerb, a German association that fights unfair competition.

In the case, TofuTown argued that the way that consumers understand these designations has evolved over time, noting too that it only refers to these terms alongside qualifying terms, such as “tofu butter” and “rice spray cream.” The court ruled, however, that relevant legislation reserves the term “milk” solely for milk of animal origin. It also reserves terms like “butter,” “cheese,” and “yogurt” for animal milk or products derived from milk. In addition, the court explained that the addition of descriptive or clarifying terms indicating the plant origin, such as those used by TofuTown, has no bearing on the matter.

Food waste ripe with nutrients
Up to one third of all food is lost before it is consumed by people, according to the Food and Agriculture Organization of the United Nations—and so are the nutrients contained in it.

A new study in the Journal of the Academy of Nutrition and Dietetics found that discarded food contains large amounts of key nutrients like vitamin D, fiber, and potassium that could instead be used to help consumers meet their daily recommended intake. According to the study, which was conducted at the Johns Hopkins Center for a Livable Future, nutrient-dense foods like fruits, vegetables, seafood, and dairy products are wasted at disproportionately high rates.

“This study offers us new ways of appreciating the value of wasted food,” says Roni Neff, an assistant professor at the university’s Bloomberg School’s Dept. of Environmental Health and Engineering, who oversaw the study. “While not all food that is wasted could or should be recovered, it reminds us that we are dumping a great deal of high quality, nutritious food that people could be enjoying.”

In all years, however, less than 2% of U.S. households had packaged food and beverage purchases with sodium density of 1.1 milligrams per kilocalorie or less. While the researchers acknowledge that there has been significant progress toward sodium reduction in packaged foods, they say continued efforts are needed to prevent excess sodium intake.

Consumers treat selves with snacks
Half of consumers snack to treat themselves, and more than a quarter (28%) say a snack’s taste is more important than its health benefits, according to research from Mintel.

According to the research, consumers are turning to snacks to make them feel good—as a way to practice self-care, explains Mintel. Thirty-seven percent of consumers snack to give themselves a break and 24% do so to relieve stress.

Of course, health is still a key consideration, too. Thirty-two percent of respondents say the majority of their snacks are heathy, and 28% say their snack choices in 2017 have been healthier than those they made in 2016. Snacks with health-related claims are among the fastest-growing claims; products that feature low/no/reduced allergen claims account for 46% of new product launches in 2017.

“The importance of snacking in America is undeniable and it is creating more and more opportunity for companies and brands as snacking frequency increases, particularly among younger consumers,” says Beth Bloom, associate director of U.S. food and drink reports at Mintel. “While health is a factor for consideration in food and drink decisions, the majority of snackers do so for a treat, meaning even health-focused snacks should appeal with messages about enjoyment and indulgence. In recent years, brands have focused product innovation largely on cleaner formulations, highlighting an opportunity for innovative products with health attributes that appeal to health-conscious consumers.”

• Algatech opened a New York City–based subsidiary to serve its customers in the North American market.

• American Almond celebrated the grand opening of its new facility in Pennsauken, N.J.

• Blommer announced several capacity additions and the launch of a new line of premium chocolate created for confectioners and chocolatiers.

• ChemPoint, a subsidiary of Univar, expanded its strategic marketing relationship with the Stepan Lipid Nutrition unit of Stepan Co.

• Danone will sell Stonyfield to Lactalis.

• ESHA Research and TraceGains announced a strategic partnership for a more streamlined process for gathering and updating supplier ingredient data.

• Golden Peanut and Tree Nuts announced that it has expanded its Blakely, Ga., production facility.

• Package Concepts and Materials is adding 30,000 square feet to its Greenville, S.C., facility.

• Renaissance BioScience Corp. will receive a multiyear contribution of up to CDN$500,000 from the National Research Council of Canada Industrial Research Assistance Program.

• Steviva Ingredients opened a manufacturing and distribution center in Salinas, Spain, and a new headquarters in Portland, Ore.