This month’s column will continue the theme of “How Is it Processed?” with a focus on cheese. A fun fact is that it takes 10 pounds of milk to make one pound of cheese. Production of cheese will be described in this column, as will effects of processing on the final properties of this popular food. 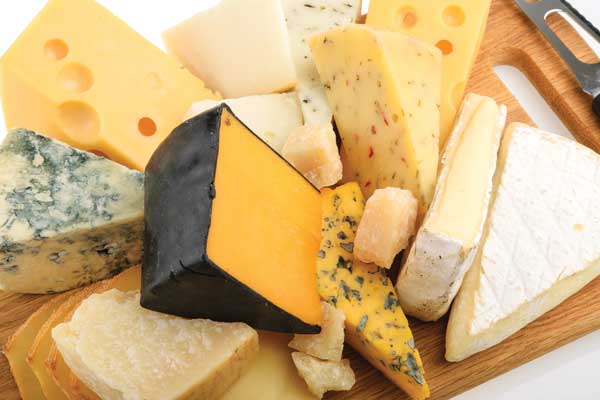 History, Market, and Nutrition
The history of cheese goes back at least 4,000 years. Cheesemaking likely originated from nomadic storage of milk in vessels made from sheep and goat stomachs. Stomach linings naturally contained rennet, which in combination with the wild bacteria in the milk, likely formed the first cheeses by separating the milk into curd and whey.

According to the U.S. Dept. of Agriculture (USDA), domestic consumption of cheese reached 5.35 million metric tons in 2016, up 7.6% from two years earlier. Americans eat on average 34 pounds of cheese annually, a level of consumption that has climbed by 43% over the past 25 years. Annual per capita cheese consumption is predicted to grow to 36.5 pounds by 2024. By 2018, the U.S. cheese market is expected to be worth $27 billion and the global market $138 billion. Growth in the United States is driven largely by Millennial consumers. Millennials desire new flavors and are willing to pay more for higher-quality eating experiences. This has led to increased diversity in cheese flavors, as well as growth in specialty, authentic, and natural cheeses.

The USDA recommends consumption of three servings of dairy a day, and cheese is a good means to meet that recommendation. Cheese contains calcium, which is lacking in many American diets. It also provides many other nutrients, including phosphorus, zinc, vitamin A, and vitamin B12. In addition, cheese is a good source of protein.

Cheese can broadly be categorized as natural or processed. The term “natural cheese” refers to cheese that is made directly from milk. Processed cheese, on the other hand, is made using natural cheese plus other ingredients that are cooked together to change the texture and/or melting properties of the cheese.

Milk Processing
The main ingredient in cheese is milk. Cow, goat, sheep, water buffalo, or a blend of these milks can be used. Cheese can be made from raw or pasteurized milk. Raw milk imparts different flavors and textures to the finished cheese. Cheese made from raw milk must be aged at least 60 days for safety. The composition of the milk has a large influence on the properties of the cheese. Milk is typically standardized for cheese production. Factors such as the protein-to-fat ratio may be varied either by skimming off excess fat or adding cream, depending on the cheese being processed. Skim milk, milk powder, evaporated milk, or ultrafiltration retentate may be added to modify the total milk solids. Calcium content is important in that it plays a major role in coagulation, hence calcium chloride is frequently added. Milk pH is also commonly adjusted. Salt levels are optimized. In addition, milk may be colored with annatto.

At the start of the cheesemaking process, the milk is heated to a temperature required to promote the growth of bacteria that ferment lactose into lactic acid. If milk is pasteurized prior to cheese manufacturing, it must be cooled to 32°C for starter culture growth.

Acidification and Coagulation
The production of acid at the optimum rate is critical to the manufacture of good quality cheese. Cheese can broadly be categorized as acid or rennet cheese.

Bacteria may be wild in milk, or they may be added as a starter. Homofer-mentive bacteria produce only lactic acid during fermentation, versus heterofermentive bacteria that, in addition to lactic acid, produce other compounds such as alcohol, aldehydes, ketones, and carbon dioxide. Homofermentive bacteria are commonly used in cheeses such as cheddar where a clean acid flavor is required. Heterofermentive bacteria produce a wide range of flavors, including fruity flavors. Typical starter culture bacteria include Lactococcus lactis subsp. lactis or cremoris, Streptococcus salivarius subsp. thermophilus, Lactobacillus delbruckii subsp. bulgaricus and Lactobacillus helveticus. Adjunct cultures may also be added to further enhance flavor and improve texture. These can result in the formation of eye holes in the cheese. Mold spores may also be added to the milk when making mold-ripened cheeses. Starter cultures are still used for some cheese varieties; however, many have discontinued this practice due to risk of bacteriophage infection.

As an alternative to ripening, milk can be direct pre-acidified either through addition of acid (lactic or hydrochloric) or acidogen (gluconic acid-&-lactone). Chemical acidification is mainly used for cheese varieties where texture is more important than flavor. Acidification times range from 5–6 hr for cheddar to 10–12 hr for Swiss cheeses. Target pH levels vary depending on the cheese variety being processed. Swiss and blue cheeses, for instance, require pH levels of 6.2–6.5.

Coagulation is an essential step for the formation of cheese. It involves coagulation of casein to form a gel entrapping fat, if fat is present. Most cheese varieties (75%) are produced using rennet coagulation. Rennet contains the enzyme chymosin, which converts K-casein into para-K-caseinate and glycomacropeptide. Calf rennet or rennet produced through microbial processing can be used. Rennet acts on the milk proteins to form the curd. After rennet is added, the curd is not disturbed for 30 min or longer. 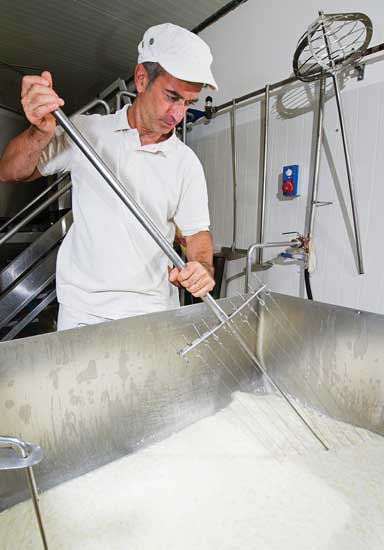 Dehydration of Coagulum and Forming of Curds
After the curd or coagulum reaches its final pH, the coagulum is cut with knives. In large processing plants the cheese is cut vertically and horizontally with large, sharp, multi-bladed wire knives that also agitate the cheese pieces. Soft cheeses are cut into big chunks, whereas hard cheeses are cut into tiny chunks. The rate and extent of syneresis are dependent on pH, temperature, calcium content, stir rate, and time. Salt is frequently added to promote syneresis. The coagulum may also be scalded, by heating to 100°F (38°C) to help separate the whey.

There are four main ways of separating curds from whey. The first method is used for soft cheeses and involves curds being transferred into perforated molds. The second method involves removing supernatant whey after the curds have settled in the vat and is used for Gouda and Emmenthal cheeses. Next curds can be scooped from the vat and placed in molds, as is done with Parmigiano-Reggiano. Finally perforated screens can be used to drain the whey using gravity, as occurs with cheddar cheeses.

In many cases, the size and shape of the cheese are cosmetic, but in other cases, such as with surface-ripened varieties, the size must be small to enable the surface microflora, which are effective only over short distances, to ripen the cheese. Varieties with eyes, on the other hand, must be large enough to retain sufficient carbon dioxide for eye development. Curds for high-moisture cheeses do not typically require pressing, but curds for medium- and low-moisture cheeses do. Cheddar cheese is pressed at 2.7 kPa to further remove whey.

Maturation
Maturation or aging is critical to the formation of the final cheese flavor. It is also critical for formation of the final cheese structure. Aged cheddar ripens two years to develop its extra sharp flavor. Some varieties of cheese require inoculation with a flavoring mold, brine bath, or cloth wrapping before storage at the appropriate temperature and relative humidity to age. Cheese may be sprayed or dipped in bacteria prior to aging.

Some cheeses develop a rind naturally through dehydration, and others may develop a rind due to bacterial growth. Other cheeses are sealed in waxes or cloth. In most cases, final cheeses are packed in synthetic plastic packaging prior to distribution and storage. Leftover, waste cheese is typically saved and used later to process into processed cheeses.

Recent Innovations
Cheese innovation has been driven by the development of specialty and unique cheeses. New flavors of cheeses abound, including mango habanero, espresso, harissa, chocolate, hazelnut, bruschetta, and many more. New cheese forms are also popular due to increased snacking among consumers. Snacking now represents 50% of all eating occasions. Portion-controlled cheese snacks have become very popular, such as single-serve cups of mascarpone and ricotta, as well as string and cube nibbles. Baked cheeses are also growing in popularity. Cheese sheets have also been introduced by Lotito Foods, Edison, N.J. These parbaked sheets of cheese are natural and can be used as a wrap or warmed and molded into crispy cheese bowls.