This month’s Processing column will review the brewing process and effects of brewing on the final product properties. Beer is the oldest and most widely consumed alcoholic beverage. 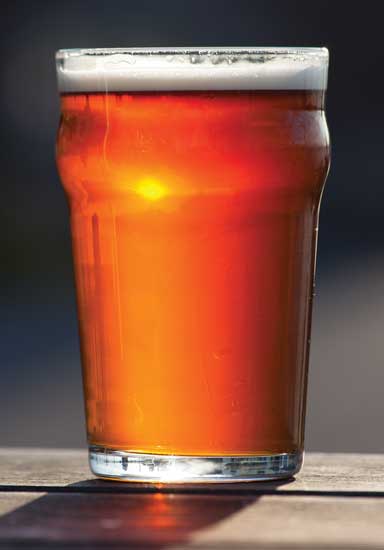 Beer’s History, Market, and Nutrition
The history of beer traces back to the early Neolithic Era, or 9500 BC. During the construction of the Great Pyramids, Egyptian workers were paid four to five liters of beer a day for both refreshment and nourishment. Around 3000 BC, beer spread throughout Europe. Early European beers contained fruit, honey, spices, and even narcotic herbs. Hops were not introduced until the year 822.

Today the brewing industry is a global business. In 2015 the United States was the second-largest producer of beer worldwide, producing about 224 million hectoliters of beer, following China. In 2016 Americans spent more than $107.6 billion on beer, outpacing sales of wine, spirits, and water. The greatest increases in sales of beer in recent years have come from the craft beer category, which increased 10% from 2015 to 2016, well over the overall beer category, which increased only 1.3%–3.5%. The Brewers Association recorded 5,301 operating craft breweries in 2016, up from 4,548 in 2015. The total dollar value of craft breweries was $23.5 billion in 2016. As for consumption, Americans drank an average of 27 gallons of beer per capita in 2013, with 6% percent of U.S. adults consuming beer every day.

Nutritionally, beer consumption in moderation has been related to potential improvements in cholesterol profiles as well as reduced risk of osteoporosis. Beer contains soluble fiber, antioxidants, and small amounts of calcium, iron, copper, manganese, selenium, B vitamins, and potassium. Beer’s alcohol content varies from 3% to 4%, with most pale lagers containing 4% to 6% alcohol.

The Brewing Process
• Malting and Milling. Brewing begins with raw barley, wheat, oats, or rye that is germinated in a malt house. Fully ripened grains are “steeped” or soaked in cold water until saturated. The water is changed once a day for 40–72 hours after which the grains are placed into shallow tanks where they are aerated and stirred. During germination, enzymes such as malt diastase are released that convert starch into sugar. Germination continues for up to six days after which the grain is placed into a kiln where it is dried and/or roasted. Temperature is gradually increased in the kiln over several hours. Germination conditions and roasting times and temperatures strongly influence beer flavor and color.

Once the kilning is complete, the product is referred to as malt. It is then milled to break apart the kernels and expose the cotyledon, which contains the majority of the carbohydrates and sugars. Grains are typically dry milled with roller mills (grist mills) or hammer mills. Milling conditions are optimized to crush the grains enough to expose the starchy center of the seed without damaging the hulls that encase them. In modern plants, grain may be hydrated before milling to make the husk more pliable and reduce breakage. If the crush is too coarse, not enough of the starch will be available for fermentation. If the crush is too fine, the husks, which act as a filter bed for the brew during lautering, will be destroyed and the brew will be gummy and unusable. Hammer mills produce a finer mash and as a result are often used when mash filters are going to be employed during lautering.

• Mashing and Lautering. Once the grain is milled, it is added to a large vessel called the mash tun and mixed with hot water to form the mash. The purity of the water used in mashing is critical to the production of high quality beer. Assuring the proper calcium and acid content is needed to obtain maximum enzyme activity during the mash. Mashing converts starches into sugars that can be fermented through a process called saccharification. Complex proteins are also broken down during mashing, reducing haze in beer. Mashing usually takes one to two hours and temperatures are closely controlled to optimize the breakdown of sugars and proteins. At lower temperatures, more highly fermentable sugars are produced, resulting in dry beers. Higher temperatures support production of sweeter, full-bodied beers. Enzymes can be added during modern mash processes. At the end of mashing, the temperature is increased to about 75°C prior to lautering to free up additional starch and reduce mash viscosity.

Lautering is the separation of wort (the liquid present after mashing) from the spent grains. To begin the lautering process, the mash is transferred into a vessel with a false bottom called a lauter tun. The clear wort is then drained from the spent grains. Through a process called sparging, additional water is added to extract additional fermentable sugars from the grains. This is done gradually so as not to disrupt the spent grain bed that acts as a filter for the wort. It is important not to sparge for too long to avoid extraction of undesirable bitter tannins. Some lauter tuns have rakes or knives that cut into the bed of spent grains to maintain good flow. Alternately, a mash filter can be used for lautering, eliminating the need for grain to act as a filtration medium. Mash filters are plate-in-frame filters that contain plates that support filter cloths. Newer mash filters also have bladders that press liquid out during sparging. 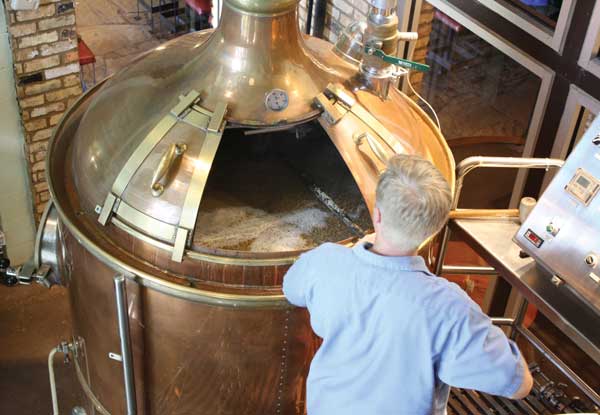 • Boiling. Once the wort is separated, hops are added, and the mixture is brought to a boil in a large copper brew kettle for one to two hours. Copper is the metal traditionally used for the brew kettle due to its high heat transfer properties. Boiling is not only performed to sterilize the beer but also to isomerize the acids in the hops to release bitterness into the beer. The longer the hops are boiled, the more alpha acids are isomerized, increasing bitterness. Hops can be added early in boiling as well as later in boiling. Hops added later in boiling add flavor and aroma to the beer, not bitterness, through their oils. Once the boil is completed, the mixture is sent to the whirlpool to remove hop matter and coagulated proteins. The centripetal force present in the whirlpool pushes the wort into the bottom, center of the tank where it is removed. Next the beer is cooled quickly to prevent oxidation and production of off-flavors. In modern breweries, cooling is done by a plate heat exchanger.

• Fermenting. Once the wort is cooled and aerated, it is moved to the fermenter, which is usually a large stainless steel tank but can also be an open stone vessel or a wooden vat. Yeast is added, and the wort begins to ferment, converting sugars into alcohol and carbon dioxide. There are three main fermentation methods: warm, cool, and spontaneous. Warm fermentation uses yeast such as Saccharomyces cerevisiae at temperatures between 15°C–20°C. Generally, warm fermenting beers are ales and are ready to drink within three weeks of beginning fermentation. Cool fermentation begins at temperatures around 10°C and then continues during storage (lagering) for several weeks to months at temperatures close to freezing. Cool fermentation is said to result in the cleaner flavor present in lagers. The yeast used in this process is typically Saccharomyces pastorianus. Spontaneous fermentation does not involve any yeast inoculation. Instead the beer is fermented in oak barrels using the resident microbiota present in the wood through a process that can take up to two years.

• Conditioning and Filtering. Once the yeast has consumed all of the available sugars, primary fermentation is over. During conditioning, the yeast continues to act, absorbing off-flavors that were created during fermentation. For ales, this process can take a week; whereas for lagers it can take several months. To speed up the process, some lager brewers use a practice called krausening, whereby still-fermenting wort is added to restart fermentation. Dormant yeast then settles to the bottom of the fermentation vessel and is removed through mechanical filtering and/or use of filtering agents. Filtering stabilizes beer flavor and gives beer a clean shine. Filters may be in the form of sheets or a fine powder such as diatomaceous earth.

• Pasteurization and Packaging. Beer can be pasteurized to kill any remaining yeast and prevent further alcohol production. Pasteurization is not used for genuine draft beers, which must be kept at refrigerated temperatures to preserve flavor and slow any remaining yeast activity. Beer is commonly packed in cans, bottles, or kegs. During bottling, additional carbon dioxide gas is sometimes introduced. Carbon dioxide from fermentation tanks can be added back to improve the final aroma of the beer. Some brewers practice bottle conditioning, adding yeast, sugar, and/or wort after packaging to bring on secondary fermentation inside the bottle, thereby adding depth of flavor and natural carbonation while extending the shelf life of the beer and removing any oxygen present in the bottle.

Recent Processing Innovations
A good deal of recent research has focused on the potential of genetics and breeding to improve the quality of barley and hops to increase resistance to diseases and improve final product quality. Genetic improvement of yeasts is also being explored to produce new yeast strains that resist contamination and ferment carbohydrates that currently are not fermentable by commonly used yeasts. Another area of recent research is improving our understanding of beer processing and the relationship between process parameters, product chemistry, and final product quality.

New uses for brewers’ spent grain are also being explored. Currently spent grain is used for animal food and fertilizer. Companies like San Francisco–based ReGrained are developing human foods such as bars out of spent grain, and it is anticipated that new healthy uses for it will be developed in the future.