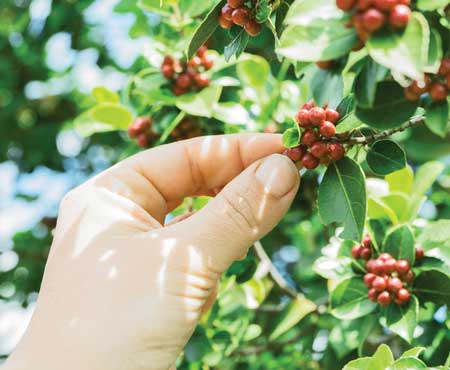 History, Market, and Nutrition
The history of coffee traces back to the ancient coffee forests on the Ethiopian plateau. Legend says that coffee was first discovered there by the goat herder Kaldi in 850 AD. Kaldi noticed that his goats became energetic and didn’t sleep at night after eating coffee berries. He reported this to an abbot who made a drink from the berries and discovered it kept him up through the long hours of evening prayer. From there coffee spread through the Arabian Peninsula in the 15th century and Europe and America during the 17th century.

Coffee is the second-most-valuable commodity in the world, second to oil. Approximately 150 million 60 kg bags of coffee are produced each year worldwide, with Brazil being the largest producer of coffee. The global coffee market is composed of three main types: arabica, robust, and liberica. Arabica holds the highest share at about 70%. Coffee is the most preferred hot beverage in the United States and Europe. Approximately 2 billion cups of coffee are consumed daily worldwide. The retail value of the U.S. coffee market was $48 billion in 2015, according to the Specialty Coffee Assoc. of America. The average American spends $21 a week on coffee, and average coffee drinkers drink three cups of coffee each day. Ready-to drink, iced, and cold brew coffee consumption is rising. Iced coffee differs from cold brewed coffee in that iced coffee is brewed like standard hot coffee, whereas cold coffee is brewed for longer periods of time at cold temperatures. Nitro coffee, coffee that is poured from a tap and has a mouthfeel similar to beer, is also rising in popularity. The single-cup category and foodservice coffee sales are also growing.

Nutritionally, coffee is a good source of antioxidants. Americans get more antioxidants from coffee than from any other beverage. In addition, coffee contains the nutrients riboflavin, pantothenic acid, manganese, potassium, magnesium, and niacin. Last, but not least, it contains caffeine. Studies have shown that coffee may lower the risk of type 2 diabetes, Alzheimer’s disease, Parkinson’s disease, and dementia.

Coffee Processing
• Bean Growth and Harvesting. Coffee plants flower three to four years after planting. Coffee cherries develop from the flowers. The cherries ripen about eight months after flowering and change color from green to red. Some countries harvest once a year and others twice. In most countries, the coffee crop is harvested by hand, although in countries like Brazil the process has been mechanized.

Coffee fruit is removed from the trees using one of two processes: strip picking or selective picking. In strip picking, all of the coffee fruit is removed from the tree regardless of maturation. In selective picking, the ripe, red cherries are harvested, and this is generally done by hand. Pickers rotate picking trees every eight to ten days. This process is more labor intensive than the strip picking and is generally used for finer arabica beans.

• Separation. Coffee fruit must be processed quickly after harvesting to prevent spoilage. Whatever the harvesting method, green and overripe coffee cherries inevitably end up mixed together with perfectly ripe coffee cherries. There are two main methods of separation: wet and dry. Water is used in the wet method. Overripe and underdeveloped coffee cherries, sticks, and leaves float in water. Ripe coffee beans and green coffee cherries sink. The first step in wet coffee processing is separation of floaters from sinkers. In dry processing, harvested cherries are separated by winnowing, which is commonly done by hand with a large sieve. Winnowing can also be done mechanically.

• Processing and Drying the Cherries. There are three main methods used to process and dry coffee cherries. They are the dry process, the wet process, and the semidry process. Drying is very important, since it determines the final quality of the green coffee. Coffee that is overdried will be brittle, and a coffee that has not been dried enough will deteriorate.

The dry process (also known as the natural method) is the oldest and most common method and is still used in many countries where water is scarce. In this process, freshly picked cherries are spread out on the ground or on raised tables to dry in the sun. They are raked and turned throughout the day and covered at night to keep them from getting wet. The process may continue for up to four weeks until the moisture content of the cherries drops to 11%. Machine drying in a hot-air dryer may be performed in combination with sun drying. When done properly, dry-processed coffee results in a smooth and heavy-bodied brew.

The wet process employs a pulping machine to remove the pulp from the cherries. In this process, the freshly harvested cherries are passed through a pulping machine to separate the skin and pulp from the bean. Green coffee cherries are hard and cannot be pulped. They pass to the end of the barrel system. The pressure inside the barrel is regulated to control the quality of the beans. Ideally, 3% of the ripe cherries are not pulped and are removed with the green cherries to preserve the final quality of the beans. The pulp and the beans are then separated by centrifugal force and a barrel screen system. The remaining pulp on these beans is fermented for 16 to 36 hours, breaking down the cellulose and pectin. As the beans ferment, the mucilage is removed. Alternately, the mucilage can be removed by mechanical scrubbing to save water and reduce fermentation time. After the pulp has been removed, the beans with their parchment skin are dried to 11% moisture. Drying can be performed in the sun and/or in a hot air dryer. Hot air drying is normally only done where space is at a premium and/or humidity is too high. The wet process results in a clean, balanced flavor and a fruity acidity.

The semidry process is a hybrid process. In this relatively new process, the outer skin of the cherries is removed mechanically by wet grinding, using pulping machines, and the wet beans covered in mucilage are stored for one day. The mucilage is then washed off and the coffee beans are dried. This process is complicated because of the high sugar content present in the mucilage during fermentation and drying. This sugar content makes the beans vulnerable to mold and bacteria. Drying needs to be monitored closely, and the coffee beans need to be mixed at least two times an hour. The semidry process produces coffees that are heavy-bodied, earthy, and mildly acidic.

• Hulling and Polishing. Hullers are used to remove what is left of the fruit on the bean, whether it is the crumbly parchment skin of wet-processed coffee or the parchment skin and dried mucilage of semidry-processed coffee or the entire leather fruit in dry-processed coffee. Polishing is an optional method that removes any remaining silver skin from the beans following hulling. It is done to improve the appearance of the green beans. Care must be taken because the temperatures experienced by the beans during polishing may be detrimental to final coffee flavor.

• Cleaning, Sorting, and Grading. Fine coffee is sorted and cleaned through a multistep process. Air sorters, sieve shakers, and gravity separators are used to separate based on density and size. Color sorting is performed using machines or by hand. Final grading is based on size, growing location and altitude, harvesting, taste, and cup quality.

• Aging and Decaffeinating. Two other steps that can be employed when processing coffee are aging and decaffeinating. Certain types of green coffee are thought to improve with age, especially those with low acidity. As a result, some coffee producers age coffee from three to eight years. Most coffee experts, however, believe coffee flavor peaks within one year of harvest. Decaffeination is the process of extracting caffeine from green coffee beans prior to roasting. Supercritical carbon dioxide, solvents (oil or ethyl acetate), or water can be used for extraction of caffeine. The Swiss water process uses water and osmosis to remove the caffeine. 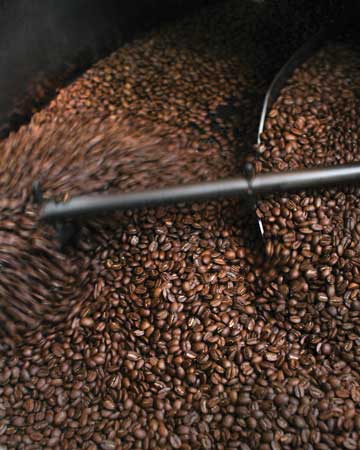 • Roasting. Beans are commonly roasted in large commercial roasters, placing beans in large metal cylinders and blowing hot air on them. The older method roasted over an electric, gas, or charcoal heater. Roasting gradually raises the temperature of the beans to between 180°C and 230°C. This triggers the release of steam, causing the beans to swell as well as darken in color and develop roasted flavors.

Recent Innovations
A good deal of recent research has focused on novel fermentation and drying methods for coffee. Producers are also experimenting with the absence of oxygen for fermentation and using catalysts like custom yeast starter cultures to speed up fermentation. The use of solar dryers is being implemented as is the use of infrared heating in both the drying and roasting steps. The next time you sip this remarkable beverage, try to be mindful of all that went into making it.