In the 2015 science fiction film The Martian, an astronaut played by Matt Damon is presumed dead and left behind on Mars by his fellow astronauts, but—in an unlikely and entertaining sequence of events—manages to survive until his eventual rescue. One of the keys to his survival is his ability to feed himself by cultivating a potato crop fertilized with human waste. The movie’s plot is not as far-fetched as one might think; scientists at Wageningen University & Research in the Netherlands have been working since 2013 to grow vegetables in a simulated Martian environment, and they’ve met with considerable success.

To date, the Wageningen researchers have grown more than a dozen crops, including green beans, peas, tomatoes, and carrots, in conditions akin to those on Mars and the moon by using soil simulants supplied by NASA. Mars soil stimulants are derived from a volcano in Hawaii, and the moon simulants come from a desert in Arizona.

Wageningen senior ecologist Wieger Wamelink says the team’s current experiment cycle is focused on growing potatoes and peanuts. Peanuts are a good choice, he explains, because together with bacteria in the soil, legumes can bind nitrogen from the air and turn it into nitrate, which acts as fertilizer.

The crop cultivation efforts are important, Wamelink continues, because there are currently several Mars colonizing initiatives underway. They include a NASA Mars mission, Elon Musk’s SpaceX project, and Mars One, a global initiative with the goal of establishing a permanent settlement on Mars. Before the planet can be colonized, however, it must have sustainable food systems in place, which is the goal of Wageninen’s “Food for Mars and Moon” project. 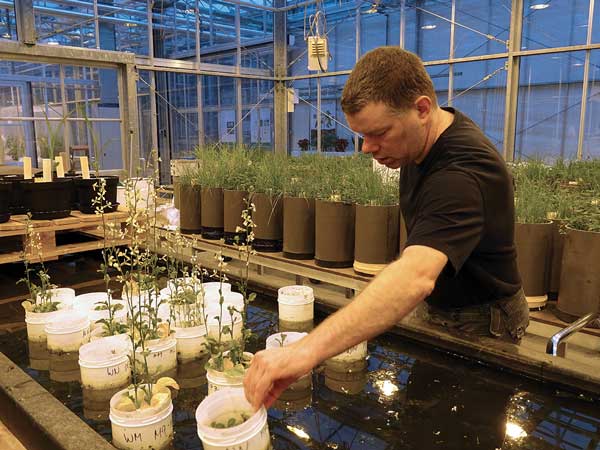 Wamelink and Wageningen student Line Schug recently developed a 3-D map of Mars that identifies the most favorable locations for growing crops. For the mapping exercise, the researchers tapped into information about the mineral content of the soil on Mars as well as climate and radiation levels. Mars soil contains high levels of heavy metals, including arsenic, cadmium, and lead, which could have an adverse effect on human health. More research is needed, but in a prior study, the scientists analyzed crops grown in Mars soil simulants to ensure their safety for human consumption, and the crops were deemed safe to eat. Mars also has the necessary water supply for crop cultivation because there is a significant amount of ice beneath its surface, Wamelink reports.

To support human life on Mars, just growing crops won’t be enough, however. Crop waste (and human waste as well) will need to be returned to the soil and broken down to allow the release of nutrients to support the next generation of crops.

For this reason, Wageningen Mars research has also included experiments with earthworms, whose role will be to eat organic waste material, digest it, excrete it, and mix it with the soil, creating a nutrient-rich and fertile growing environment.

“Bacteria can then further break down the organic matter and release the nutrients for the next generation,” Wamelink explains. What is more, he adds, by burrowing into the soil, the earthworms let in oxygen, which is important for the plants’ root systems. The Wageningen researchers recently demonstrated that earthworms can live and reproduce in the Mars soil simulant—an important step in creating a viable agricultural ecosystem on Mars.

The benefits of the crop research at Wageningen aren’t limited to future inhabitants of the red planet. The knowledge the scientists glean can be applied to creating or improving earthly ecosystems, such as in inhospitable desert areas, Wamelink observes.

Developing a workable system for growing crops on Mars is just five to 10 years away, Wamelink estimates, if he and his fellow scientists continue to receive funding. In addition to some corporate support, the dedicated researchers have raised money to support their efforts via a crowdfunding campaign.

IFTNEXT is made possible through the generous support of Ingredion, IFT’s Platinum Innovation Sponsor.