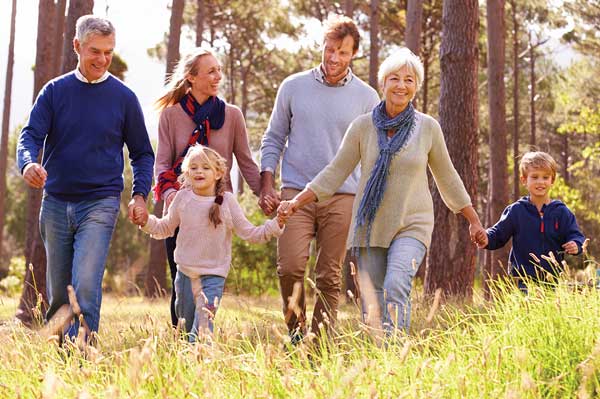 Healthy elderly people have something in common with adults decades younger: a similar gut microbiota composition. Researchers at Canada’s Western University and Lawson Health Research Institute and Tianyi Health Science Institute in China studied the gut bacteria in a group of more than 1,000 healthy Chinese individuals ranging in age from 3 to over 100 years old. They found a direct correlation between health and the microbial population in the intestine and showed that there was little difference in the gut microbiota of individuals from the age of 30 to 100-plus.

“The main conclusion is that if you are ridiculously healthy and 90 years old, your gut microbiota is not that different from a healthy 30-year-old in the same population,” says Greg Gloor, the principal investigator on the study, a professor at Western’s Schulich School of Medicine & Dentistry, and a scientist at Lawson.

“It begs the question, ‘If you can stay active and eat well, will you age better, or is healthy aging predicated by the bacteria in your gut?’” says Gregor Reid, one of the study’s authors, who is also a professor at Western’s Schulich School of Medicine & Dentistry and a scientist at Lawson.

“The findings are a bit of a chicken and egg question,” Gloor agrees. “If the microbiota is healthy and diverse, it is certainly easier to maintain a healthy lifestyle since you can eat more diverse foods without problems,” he adds.

According to Gloor, one the emerging findings in the field of microbiome research is that what’s significant about a gut microbiome is not necessarily which bacteria are present but what they are capable of—that is, what genes they contain, which of these genes are expressed, and when. “There are a number of papers that show the microbial communities can look very similar by 16S rRNA gene sequencing [but may] contain dramatically different gene contents. … For example, there are E. coli strains (Nistle) that are probiotic and others that are pathogenic (O157) because they contain different genes. However, they are all E. coli and look exactly the same by 16S rRNA gene sequencing,” he observes.

“Basically, a healthy gut microbiota is a diverse one that contains all of the genes necessary to process food and interact with the host appropriately,” Gloor continues. “This means that there is a community made up of many different types of bacteria, but the core gene content is somewhat similar despite which bacteria are there. Each unhealthy gut microbiota is unhealthy in a different way, and we are just beginning to find out the many ways that this can happen.” Gloor further notes that the study demonstrated that a decline in microbial diversity is not an inevitable consequence of aging.

Gloor says the researchers are eager to initiate follow-up studies, but unfortunately, they don’t yet have funding for them. For one thing, he says, they would like to study the gut microbiota of people with a variety of chronic diseases. “Second,” he says, “we would like to attempt more functional analyses, such as metagenomic sequencing to determine gene content and metabolomics data collection to see if we can match up microbial species, the genes they carry, and the metabolites they produce. Third, we would like to be able to follow these people over time—ideally, collect from the same cohort every year for several years and correlate changes we see over time with health status.” And finally, he says, the researchers would like to see if gut microbiota can be affected by adjusting dietary intake (fermented foods or probiotics, for example).

Results of the microbiome study were published this past fall in the journal mSphere.

Made possible through the generous support of Ingredion Incorporated, IFT’s Platinum Innovation Sponsor, IFTNEXT is a heightened, purpose-drive commitment to bringing provocative ideas and discoveries together to inspire thoughtful, important conversations that challenge conventional approaches with the goal of informing global issues related to the science of food.

The use of time domain 1H NMR to study proton dynamics in starch‐rich foods: A review September 20, 2022

Determination of the geographic origin of 52 honey samples based on the assessment of anionic content profiling with a new algorithm using monolithic column‐based micellar nano‐liquid chromatography September 20, 2022

Effects of Ligustrum robustum (Rxob.) Blume extract on the quality of peanut and palm oils during storage and frying process September 20, 2022