This month’s column will continue the theme of “How is it processed?” with a focus on tea. Both delicious and nutritious, tea is a beverage made from the leaves of a plant called Camellia sinensis and water. All tea is produced from the same plant, and it is the processing that determines the type of tea produced. 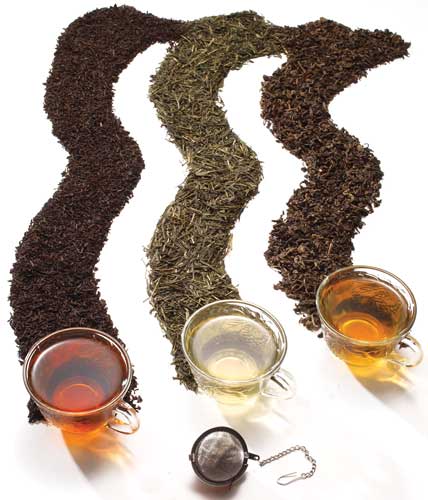 History, Market, and Nutrition
Tea is an ancient beverage steeped in history. The tea plant originated in Southwest China, Tibet, and Northern India. According to Chinese legend, it was discovered in 2737 BC by Shen Nung, the ancient Emperor of China, who was said to have been boiling water for his drink when leaves from a nearby tea bush blew into the cauldron. It wasn’t until the Tang dynasty (618–907) that consumption of tea became widespread. Later, during the 16th century, tea came to America and flourished. At that time, the English Parliament implemented heavy taxes on tea, creating political tension that ultimately resulted in the Boston Tea Party as colonists protesting the taxes dumped tea into the water off the trading ships. This was followed by the American Revolution. Both iced tea and the tea bag originated in America during the early 19th century.

Tea is the second most-consumed beverage in the world, following only water. Approximately 5.2 million metric tons of tea were produced in 2015, with China being the largest producer of tea. The global tea market is valued at $44.3 billion. It is composed of four main types: black, green, oolong, and white. About 75% of tea consumed in the United States is black tea, followed by green tea. In 2016 Americans consumed almost 84 billion servings of tea. Approximately 8 gallons of tea are consumed per capita each year, and 23% of Americans drink tea every day. Approximately four in five consumers drink tea, with Millennials being the most likely to consume it. Approximately 80% of tea consumed in America is iced. Ready-to-drink tea is the fastest-growing category in the overall tea market, with sales growing about 7%—faster than soda. Cold brew teas are also becoming increasingly popular, as are specialty, artisanal, and fermented teas. Herbal teas do not come from the Camellia sinensis plant but are infusions of leaves, roots, bark, seeds, and/or flowers from other plants.

Throughout history, tea has been thought to help “purify the body” and “preserve the mind.” Thousands of published studies in leading medical journals have supported tea’s ancient health benefit claims. Tea contains a myriad of bioactive compounds, including amino acids, caffeine, lignins, proteins, xanthenes, and flavonoids. Many of the health benefits of tea are attributed to their flavonoids, which provide antioxidant benefits. Regular tea consumption has been shown to have a wide range of health benefits, including cardiovascular benefits, cancer risk reduction, and benefits related to immune health, metabolism, oral health, neurological health, and bone health. In addition, tea is low cost and calorie free.

Tea Processing
• Tea Growth and Harvesting. Growing conditions have a large impact on the flavor of tea. The terroir, or growing environment, is an important contributor to tea flavor. Changes in climate, soil, and surrounding vegetation subtly change the leaf and affect the final tea.

Tea leaves are picked from Camellia sinensis bushes up to four times a year. Tea made from flushes, which include the terminal bud and two young leaves, are the highest quality teas with the finest flavors and aromas. This type of harvesting is called fine plucking. Fine plucking is done by hand in many countries. Tea harvesting employs millions of people around the world. 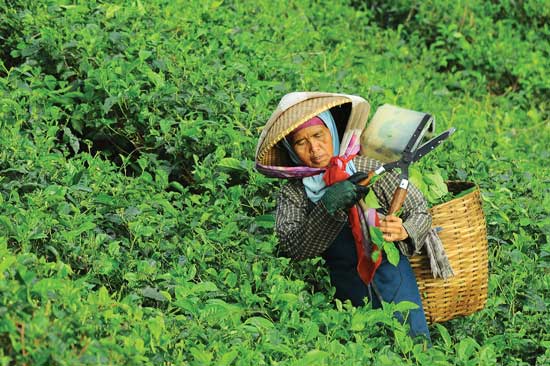 Coarse plucking, which uses tea flushes and mature leaves, can be achieved using simple clippers. Machine harvesters can also be used. Due to the presence of additional cellulose and woody structures, the quality of the flavor and aroma in machine-harvested tea may be lessened.

As mentioned previously, all tea is produced from the same plant, and it is the processing that determines the type of tea produced. Tea type is largely determined by the level of oxidation, which increases from white to green to oolong to black teas. Each of the processing steps employed in tea production has a distinct effect on the final product quality and characteristics.

• Withering of Tea Leaves. Tea leaves begin to wilt soon after picking with gradual onset of enzymatic oxidation. Withering is used to remove excess water from the leaves, as well as to allow a slight amount of oxidation. Leaves are typically withered by spreading them out on fabric or bamboo mats in either the sun or a breezy room. Humidity and temperature are monitored, and the leaves are rotated. Withering can result in up to 50% moisture loss. The process is important to promote breakdown of leaf proteins into free amino acids and increase availability of caffeine, both of which affect the flavor of tea. Withering is also important in making the waxy tea leaves flexible so they won’t crumble during the remainder of processing. All tea types are withered, although using different conditions.

• Mechanical Processing/Disruption of Oolong and Black Tea Leaves. After the leaves are withered, a variety of methods can be used to mechanically damage/disrupt the tea leaves. The purpose of this step is to break down the cell walls in the leaves to facilitate oxidation. This step is employed for processing oolong and black teas, which require greater levels of oxidation. Leaves must be thoroughly and evenly bruised to produce consistent tea. Some dark teas undergo multiple rounds of bruising and/or cutting, tearing, and curling (CTC). In the orthodox method, gentle rolling is performed either manually or by machine to release moisture, coating the surface of the leaves with juices and preserving the whole, unbroken leaf structure. Alternatively, the CTC method is used. This is performed by a machine that chops the leaves into small pieces.

• Oxidization Process for Oolong and Black Tea Leaves. Oxidation is an important chemical reaction and process step for the final flavor of the tea, as well as its appearance and color. The leaves are typically spread out in a cool, damp atmosphere to facilitate the oxidation process. This is often accompanied by agitation. In this process, the chlorophyll in the leaves is enzymatically broken down and tannins are released and oxidized. Black teas are highly oxidized (100%), which produces the darkest-colored and strongest-flavored teas. Oolong teas vary in oxidation from about 5% to 70% oxidation. Green and white teas are not oxidized.

• Fixation or Kill Greening of Tea Leaves. Fixation is performed to stop oxidation at a desired level. This step is sometimes called kill green because it preserves the green color of the tea. This process is accomplished by mildly heating the tea leaves, thus denaturing the enzymes responsible for oxidation. The mild heat also helps remove undesirable odors from the leaves while preserving their flavor. There are two traditional processes for fixation. The first is pan roasting in a wok and is traditionally done in China. The second is steaming, which is typically performed in Japan. These two processes produce different flavored teas. More recently, baking or panning has been performed in large rolling drums. All teas other than black teas require fixation.

• Rolling/Shaping. Damp leaves can be rolled by hand or with rolling machines to cause the tea leaves to wrap around themselves. This rolling action also releases some of the sap and essential oils in the tea leaves and enhances the final flavor of the tea. A variety of shapes can be formed, including spirals, pellets, balls, and cones. In many types of oolong teas, the leaves are shaped in large cloth bags that are kneaded by hand or machine. Alternately, the leaves may be pressed into bricks using heavy stones or presses.

• Dehydration. Finally, all tea types must be dried to remove any residual moisture and create a shelf-stable tea. This step is typically accomplished through baking and can dramatically change the tea flavor. Alternately, panning, sun drying, or hot air drying can be used for dehydration. Charcoal roasting is sometimes used to impart a distinctly rich quality to the flavor during this step. In contrast, gentle drying can be used to avoid any flavor changes. White tea, for example, is typically dried very gently for long periods of time to replicate traditional sun drying processes.

• Sorting, Bagging, and Packaging. After tea is dried, it is sorted, bagged in some cases, and packaged.

Recent Innovations in Tea Processing
Several innovation fronts are being explored for teas. The first is farming tea in the United States, which has seen expansion in recent years. In addition, fermented, ready-to-drink kombucha teas are becoming increasingly popular among health-conscious consumers. Tea-infused alcohol is also being introduced in Japan. Recent research has focused on novel fermentation and drying methods for tea. Finally, research on tea processing and how that impacts the nutritional value of teas is ongoing. The next time you sip this remarkable beverage, try to be mindful of all that went into making it.