With more than one-third of the U.S. population over age 50 and maturing Millennials starting families or moving out on their own, it’s not surprising that activities, including eating, are recentering around the home. So what’s the new normal? Just over eight in 10 consumers prepare and eat their evening meal at home four or more nights per week (FMI 2017a). And 42% of shoppers say they do so more often than in 2016 (Packer 2017).

But despite an increased passion for cooking, especially among Millennials, time pressures and a desire for more sophisticated fare are forcing Americans to further outsource their meals. Nearly one-third (30%) of evening meals are now completely prepared outside of the home; 34% are made from a mix of prepared/partially prepared and some scratch items; and 35% are made from scratch (Hartman 2017). One in five food shoppers looks for meals that require little or no preparation (FMI 2017a).

Retailers report that deli/grocerant/prepared sections are second only to the meat department in generating store traffic and sales (Dudlicek 2017a). Sixty-two percent of supermarkets offer self-service food bars; 44%, fast-casual food stations; and 13%, a full-service restaurant (Gallagher 2017).

Unit sales of handheld breakfast sandwiches jumped 13% in convenience stores in 2016; nonbreakfast entrées were up 11.9%; sushi, egg rolls, and empanadas were the fastest-growing menu items, per Datassential (Datassential 2016a, CSP 2017).

Meal Patterns
The demise of the family meal continues. In households with kids, only 7.4 meals are eaten together at home each week—3.5 dinners, 1.6 lunches, and 2.3 breakfasts (FMI 2017a). Because different schedules are the primary obstacle, dinners that are ready to eat at any time (e.g., slow cooker and frozen meals) are getting the nod.

Increasingly, food purchase decisions are being influenced by the presence of kids/teens. Nine in 10 Millennial parents order food from a restaurant at least once per week versus 73% of the population overall (Technomic 2017a).

Nearly three-quarters (73%) of households with kids buy ready-to-eat prepared foods versus 48% of households without kids, and they are twice as likely to use frozen meals/entrées (FMI 2017a, Packaged Facts 2017a).

Households with kids accounted for 40% of snack sales in 2016, driving sales up 13% (Wyatt 2017). One-third of households with kids carry food to work/school. One in five parents wants more kid-specific meals (Packaged Facts 2016a).

Prepared lunch kits top the list of foods that households with kids/teens are much more likely to use, followed by fruit snacks, toaster pastries, nutrition bars, breakfast pastries, snack cakes, and frozen pizza (Packaged Facts 2016a).

Forty-nine percent of eating occasions involve snacks; 8% of consumers forego meals altogether in favor of all-day snacking. On 18% of snacking occasions, snacks are consumed within one hour of purchase (Hartman 2016).

Snacking tends to increase as the day progresses; there is greater desire to indulge rather than exercise restraint later in the day (Hartman 2016, Figure 2).

Gourmet/specialty foods continue to outpace their traditional counterparts in nearly every food category, reaching sales of $127 billion in 2016, up 15% from 2014. Six in 10 consumers are regular specialty food buyers; 36% buy gourmet snacks for everyday use (SFA 2017).

More than four in 10 deli operators are putting more emphasis on rotisserie programs, sandwiches, hot/cold bars, and daily specials (Dudlicek 2017b). Mexican foods, Asian dishes, and pasta top the list of foods that supermarket prepared food shoppers would like to see more of (Hanson 2017).

When it comes to prepared foods, food kits are second only to freshly cooked heat-and-eat foods in terms of consumer interest. One-quarter of adults bought a meal kit in 2016 (Nielsen 2017). Thirty-six percent would buy food kits if they were available in their local store. Those aged 25–44, households with kids, and urban adults are most likely to do so (Nielsen 2017).

Households with kids are four time more likely to use a food processer/blender, three times more likely to cook on the grill or use a slow cooker, and twice as likely to use preprepared side dishes (Harris Poll 2016). Over the past five years, use of one-pot meals jumped by 29% (FMI 2016b). 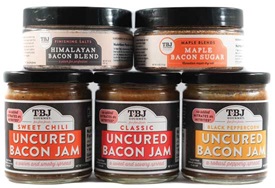 Savory leads the list of flavors that are appealing and extremely appealing, followed by sweet, smoky, spicy, ethnic, bold, tangy, and fruity—the latter down in terms of appeal from 59% in 2015 to 40% in 2017 (Technomic 2017b).

After Italian, Mexican, and Chinese, U.S. regional and Thai are the ethnic cuisines most consumed by food shoppers. More than one-third of adults eat barbecue during an average week (FMI 2016c, Wyatt 2017). Middle Eastern, African, and Peruvian are the trendy cuisines for 2018; ethnic meals for kids are trending as well (NRA 2017).

In 2017, 3.8 meals in a typical week were home cooked and contained meat or poultry—the highest proportion in five years; 74% of meal preparers include meat/poultry at least three days per week (FMI 2017b).

Eight in 10 households prepare dinners with other protein main courses at least once a week. Top choices for non-meat main courses include fish/seafood, chosen by 57% of households; eggs, 52%; beans/lentils/legumes, 37%; quinoa/plant-based protein, 18%; seeds/nuts, 17%; veggie burgers, 13%; and soy/tofu, 8% (FMI 2017b).

Consumers say spaghetti is their favorite pasta, followed by lasagna and macaroni and cheese (NPA 2015).

Potatoes are the most purchased vegetable, followed by tomatoes, onions, carrots, lettuce, broccoli, salad mix, bell peppers, celery, and cucumbers. Lettuce purchases grew 8% and potatoes 6% in the past year; bagged salads moved into the top 10 (Packer 2017).

Bananas are the most purchased fresh fruit, followed by apples, grapes, strawberries, oranges, watermelon, lemons, blueberries, peaches, and cantaloupe (Packer 2017). Nectarines came into the top 20, and mangos fell out of the top 20 list.

Trendy spaghetti squash, vegetable pastas and fries, and cauliflower-based pizza crusts are moving produce to the center of the plate. Vegetable carb substitutes are No. 7 on the list of hot culinary trends for 2018 (NRA 2017).

Nearly half of shoppers say they are grabbing fresh produce as a snack more often than last year. Fresh melon and berry mixes are the “go-to” produce snacks, followed by carrot/celery snacks (Packer 2017).

Sales of exotic fruits are likely to get more attention. Datassential reports that dragon fruit mentions on menus have jumped 192% over the past four years; persimmons, +121%; blood oranges, +105%; prickly pears, +88%; and passion fruit, +41% (Strailey 2017).

Fifty-eight percent of adults pack a sandwich for lunch at least once a week; 68% pack one for their child. Nearly half of all consumers ate a sandwich in the past day (Datassential 2017). 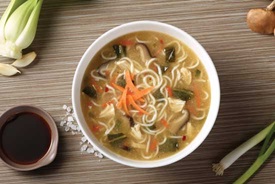 Blount Fine Foods offers a new line of fresh Asian-inspired soups that separate the broth and noodles until heating to prevent sogginess. Ready Pac’s new Fresh Prep’d soup kits include all the ingredients in a bowl plus a spoon; soup lovers need only add water.

Despite exotic newcomers, (e.g., French and Icelandic varieties), the yogurt category is struggling with sales; sales declined 1.9% for Y/E Aug. 6, 2017, as the Greek phenomenon wanes (Kennedy 2017). 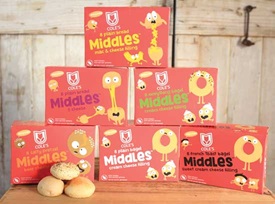 Snacks, Treats, and Desserts
Ninety-one percent of consumers snack multiple times per day; 37% of the time a snack provides one of the three most substantial eatings of the day (Hartman 2016).

For the first time in 10 years, sweet snacking is on the rise (NPD 2017). Ice cream, chocolate/candy, fresh fruit, cookies, and ice cream novelties are the most popular after-dinner snacks (NPD 2017, Figure 3).

Fifty-seven percent of adults eat dessert after a meal at least once a week; fruit is most often consumed (51% of adults), followed by cookies (40%), and ice cream/gelato/sorbet (40%) (Technomic 2017b).

What We’re Drinking
Today, U.S. consumers are drinking 72 fewer purchased beverages per year in and away from home than they were 10 years ago. Coffee, soft drinks, milk, iced tea, and bottled water are their top choices (NPD 2016). Nearly two-thirds of adults say they sometimes have a drink as a snack, up 3% versus 2016 (Wyatt 2017).

One-third of adults drink plant-based nondairy milks; 30% do so daily. While younger adults are most likely to do so, use is growing with adults aged 55-plus (Packaged Facts 2017h).

With Health in Mind
Consumers continue their quest for fresh foods. For Y/E March 3, 2017, fresh perimeter department sales outpaced total food and beverage sales with growth of 3.9% for the perimeter versus 1.8% overall growth (Packaged Facts 2017d).

More than eight in 10 consumers are very/somewhat concerned about the nutritional content of their foods (FMI 2017a). Healthful kids’ meals are No. 5 on the hot culinary trend list for 2018 (NRA 2017).

Millennial women are the demographic segment most likely to describe themselves as vegetarian; 5.8% say they are vegetarian versus 3.6% of Millennial men. About a quarter of adults self identify as “flexitarian” or “lessitarian,” meaning that they’ve cut back on their consumption of animal-based foods and beverages. Twelve percent say they bought a packaged food item that carried a vegan claim, and 6% bought a product with a Paleo claim in the past month (Packaged Facts 2017d).