Until the end of the 20th century, the food industry was primarily concerned with increasing food production and lowering the cost of food without considerable attention to sustainability. More recently, efforts to improve the efficiency of food processing in order to save energy and water while reducing food loss and disposal of food waste have begun. An array of drivers behind the need for sustainable processing will be discussed in this month’s column, as will solutions.

The Evolution of Industrial Food Processing
Historically, when the human population of the world was smaller, resources were abundant and there were fewer concerns over sustainability in food processing and storage. People spent considerable amounts of time daily on feeding themselves and their families. The food chain was simple. Foods were grown locally and eaten only when in season. This system was well suited to rural areas and small towns.

During the industrial revolution, large cities were built, distancing farmers from urban workers. A large percentage of the population became involved in occupations outside of agriculture and food. The food industry was industrialized to feed this growing urban population, which had a higher standard of living and demanded more sophisticated foods that required less time to prepare.

Since the industrial revolution, considerable changes have arisen in our food processing system. Worldwide food production has increased significantly although at a slower pace than the global population has grown. At the same time, food processing has been successful in decreasing the amount of disposable income needed for food in industrialized countries. In the 1800s, people used to have to spend 70%–80% of their income on food. Today they spend only about 14.5%. At the same time, production of food waste has increased, and resource distribution has not been optimized for efficiencies. Trade in agricultural products has also increased from $280 billion in 1999 to $920 billion in 2009. Also, year-round availability of food has become commonplace as suppliers are located all around the world.

Current Drivers
In 1987 the United Nations defined sustainable development as development that meets the needs of the present without compromising the ability for future generations to meet their own needs. Sustainability in the food industry is currently the primary strategic issue that many companies are tackling. The food industry has environmental obligations to preserve biodiversity, reduce water and energy use, lessen waste and gas emissions, and care for the well-being of local communities.

Agricultural production contributes from 17% to 32% of global greenhouse gas emissions (Murphy, McDonnell, and Fagan 2014). Additional challenges include increasing pressure regarding raw materials, ingredient sourcing, and production to feed a growing population. According to RnR Market Research, in 2015 the food industry needed to supply a minimum of 360 million tons of carbohydrates, 364 million tons of protein, and 195 million tons of fat daily to feed the global population. The world population is expected to increase 38% in the next 15 years, reaching 9 billion in 2050. This projected population increase is expected to result in an increase in annual consumption of nearly 1 billion metric tons of cereals for food and feed and 200 million tons of meat (Floros et al. 2010). All of these changes demand clever sustainable solutions to processing our food. 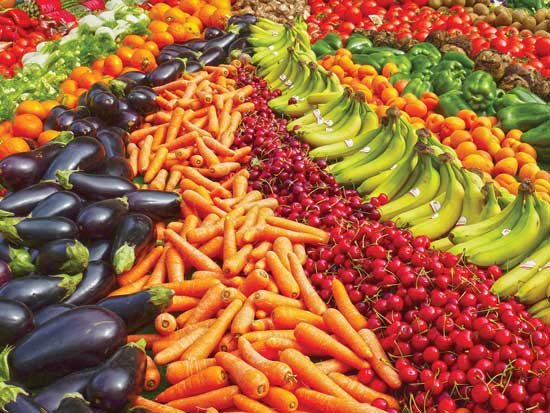 An adequate supply of healthful, nutritious food will require us to produce food in the future with much less impact on our environment. When processing food, energy typically accounts for as much as 10% of total costs and uses 25% of the total water consumption worldwide. Novel green processing technologies offer solutions to these challenges. Some examples of green technological approaches to reduce the environmental footprint of food processing include use of enzymes, microwave and radio-frequency heating, ultrasound, pulsed electric fields, infrared heating, high pressure processing, ionizing radiation, ohmic heating, and ultraviolet light treatments. Many of these have been described in previous Processing columns. In addition, efforts to convert from carbon-based energy sources to solar, hydroelectric, and wind power also support improved sustainability in food processing.

Ways to reduce waste generation are also needed. Approximately 40%–50% of produced food is wasted. At the same time, the large food security gap is growing around the world. As much as half of the food grown and harvested in underdeveloped and developing countries never gets consumed and is needed to nourish these populations. Food waste prevention requires a multipronged approach that involves reducing, reusing, recycling, valorizing, and eliminating waste. Efforts to reduce postharvest losses of produce are critical, as are development of innovative food uses for by-products.

LCA begins by defining the product and defining sub-processes related to it. These sub-processes are then tracked according to the resources required and the unwanted outputs of each. From these LCAs, a life cycle inventory is developed that can then be incorporated into a complete life cycle impact assessment to examine the impacts of resource depletion and waste generation for any given product or service. Life cycle/ environmental impact assessments are becoming more commonplace and are being used to drive improvements in sustainable food processing.

Select Success Stories
What follow are three success stories for recently constructed sustainable processing plants. These are provided as examples with the understanding that there are many more good examples in the food industry.

• J.R. Simplot. The following year, the publication designated J.R. Simplot’s Caldwell, Idaho, plant as its Green Plant of the Year. The Caldwell plant replaced three old facilities with a single plant that maximizes energy and water use efficiency through a variety of innovative technologies.

The plant is 400,000 square feet in size and is located on a 200-acre site. It processes an average of 4 million lb of raw potatoes daily into par-fried french fries as well as formed and frozen shred potato products. The plant is a zero-liquid-discharge, reclaiming up to 1.7 million gallons of water a day and returning it for reuse in the potato production process.

Membrane technology and reverse osmosis enable the effluent to be used for cooling towers, makeup water, and the clean-in-place system. Remaining discharge is used for irrigation of crops on the site. Sanitary sewage is treated on-site in solid contact chambers and lagoons. All of the waste from potato peelings, rejected potatoes, and other edible sources is used as cattle feed or treated by an anaerobic digester, which creates methane gas. This gas produces more than 100,000 million BTUs of biogas a year, which is used to heat boilers. Other technological advances include improvements in refrigeration systems, pipe insulation, compressed air systems, a regenerative thermal oxidizer, boiler stack, and fryer exhaust technologies, all of which result in energy savings. 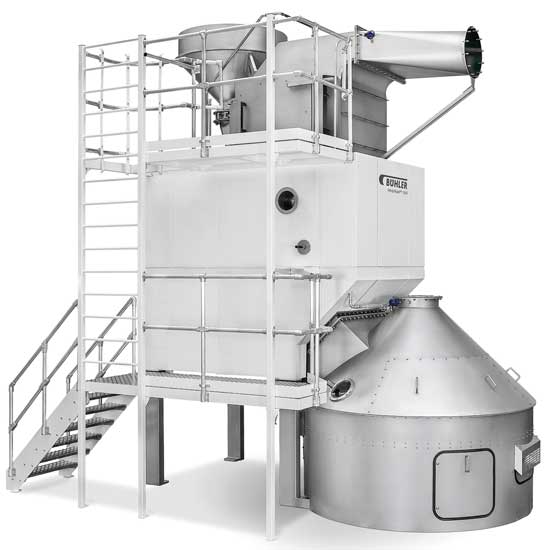 • Joh. Johannson. During the past month, Buhler Group has been building the world’s most advanced coffee processing plant for Norwegian coffee roaster Joh. Johannson. At the heart of this plant is an innovative roasting technology with record low greenhouse gas emissions.

The technology incorporates both a unique preheating unit and a novel energy recovery system. Energy consumption of the roasting process is reduced by 50%.

Toward a More Sustainable Future
Clearly the challenges ahead of us are great. As food scientists we need to use our science to meet the challenges of our time. Although steady progress has been made in energy and waste minimization in the food industry, water minimization in food processing has not been as effective. It is anticipated that this is an area of increased need for the future, one which new technologies can address. At the same time, we need to continue to improve energy efficiencies and reduce waste in order to ensure the success and the sustainability of the food industry for future generations.