This month’s Processing column will focus on the popular topic of food emulsions. The column will highlight their importance in foods as well as describe the basic science behind their formation. Emphasis will be placed on processing technologies used to manufacture food emulsions.

According to Grand View Research, the global food emulsifier market was valued at nearly $4.3 billion in 2015 and is divided into these primary categories: monoglycerides/diglycerides and derivatives, lecithin, sorbitan esters, stearoyl lactylates, and others. In 2015, a total of 195.6 kilo tons of emulsifiers were sold in the United States, and the market growth is estimated at 5.5% annually. Bakery/confectionery is the largest revenue-producing food category for the emulsifier market, followed by convenience foods, meat products, dairy products, and other.

The Science Behind Emulsions
An emulsion is a structure created from a dispersion of immiscible fluids that are transformed into very small droplets. Simple emulsions are either oil suspended in an aqueous phase (o/w) or water suspended in oil (w/o). Milk is an example of an o/w emulsion and butter is an example of a w/o emulsion.

Emulsifiers are added to emulsions to prevent the suspended droplets from coalescing and breaking the emulsion. Emulsifiers work by forming physical barriers to prevent droplets from coalescing. Many emulsifiers have both a hydrophilic (water-loving) part and a hydrophobic (oil-loving) part. In this way, emulsifiers are attracted to both polar and nonpolar compounds and naturally locate themselves between the two at the interface of emulsion droplets. They lower the interfacial tension between the oil and the water phases, stabilizing the droplets and preventing them from coalescing.

Emulsifiers can be cationic, anionic, or non-ionic. When charged, the droplets are electrostatically repelled from one another, keeping them separated. Non-ionic emulsifiers frequently have large, bulky head groups that stearically hinder coalescence.

Much of the science behind emulsions depends upon the choice of the appropriate emulsifier system. Hydrophilic/lipophilic balance (HLB) is one factor that can be helpful in identifying an appropriate non-ionic emulsifier. HLB scales range from 0–20, with 10 being an emulsifier equally attracted to water and oil. HLB values less than 10 are more hydrophobic and more than 10 are more hydrophilic. An alternative system that works well for ionic, as well as non-ionic emulsifiers, is the hydrophilic-lipophilic difference system (HLD), which takes into account salinity, oil type, surfactant concentration, and temperature.

Most emulsions in foods are macroemulsions, including milk, mayonnaise, sauces, and desserts. Formation of macroemulsions requires energy, and they contain particles with sizes in the range of 100 nm to 100 µm.

Two other types of emulsions are microemulsions and nanoemulsions. Microemulsions were not discovered until 1961. They are unique in that they are thermodynamically stable and do not require energy to form. The natural thermodynamic characteristics of the microemulsion components cause it to form spontaneously when they are combined at the appropriate ratios. Microemulsions are not commonly found in foods. They have particle sizes ranging from 5–100 nm and in this sense are similar to nanoemulsions, which have particle sizes ranging from 20–200 nm. The difference between these two is that nanoemulsions are formed by mechanical forces. Both micro and nanoemulsions are transparent because their droplets do not scatter light like larger particle emulsions. Nanoemulsion formation requires high energy input through high pressure homogenization, microfluidizers, or ultrasonic generators. Nanoemulsions are becoming increasingly important in the food industry to encapsulate and deliver functional ingredients in stable food systems.

Multilayer (or multiple) emulsions are another type of emulsion that can be used as a highly effective delivery vehicle for vitamins, supplements, and nutraceuticals. These types of emulsion systems are described as emulsions within emulsions and can be tailored to optimize bioavailability of actives. In multilayer emulsions, an emulsion structure is formed where w/o and o/w morphologies exist together, making these systems complex. In addition to offering advantages for encapsulation and delivery of actives, multilayer emulsions can be effective in masking off-flavors. They are also used in novel low-fat foods with properties similar to those of high-fat products.

One final type of emulsion found in foods is particle-stabilized emulsions, which are also known as Pickering emulsions. Pickering emulsions are not stabilized by any of the previously mentioned emulsifier molecules but are instead stabilized by solid colloidal particles. These solid particles can be partially wetted by both the oil and water components in the emulsion, thus stabilizing the droplet interface. The interface is typically thicker and mechanically stronger than the interface present when traditional emulsifiers are used. This results in increased emulsion stability. Examples of solid particles that can be used to stabilize Pickering emulsions include fat crystals, modified starch granules, protein microparticles, and titanium dioxide.

Processing Equipment
Emulsification is the process by which small droplets, coated with emulsifier, are formed. As mentioned in the previous section, most emulsions require addition of mechanical energy. In the kitchen, this may be achieved by hand or through the use of a mixer. In the food plant, the process may be batch or continuous. During the process, the continuous phase is prepared first. This phase includes the emulsifier. To this, the dispersed phase is added slowly with vigorous agitation.

Common types of process equipment used for emulsification include immersion mixers, colloid mills, and homogenizers. The equipment delivers high shear to the dispersed phase in order to form the small emulsion droplets. Immersion mixers contain a fast-spinning rotor inside a cage with slots or holes. As the spinner rotates, liquid is pulled into the cage and expelled through the openings. Secondary circulation may also be provided by an additional agitator. Colloid mills consist of two plates spaced narrowly apart through which the fluid passes. One or both plates may rotate and there may be pins or other shear-inducing structures on the plate surfaces. One or multiple passes between the plates may be required to form the emulsion. Cooling can frequently be applied and the clearance between the plates adjusted in order to optimize the process. Homogenizers are the most common type of equipment used to commercially process emulsions. They consist of a high-pressure pump that forces the fluid through one or more restrictive valves to create shear and form the emulsion particles. Homogenizers may operate in a batch or a continuous fashion.

The heart of the homogenizer is the homogenizing valve. The product is forced between the valve and the seat at high pressure creating an increase in velocity and a decrease in pressure that leads to turbulence and forms the emulsion particles. Valves, including valve seats, are formed with specific geometries using select materials in order to optimize the process. In some cases, a large inner chamber is placed on a flat valve, producing what is called a short-land value seat. The land is the surface on the seal that the fluid passes over as it travels through the gap between the valve and the seat. Short-land valves enable emulsions to be processed at lower pressures. In this way the valve design can have a significant effect on the energy required in processing. Many homogenizer systems contain multiple stages of homogenization.

Emulsion processing options are numerous as shown in the photo above. These varied systems are used to produce coarse to super fine emulsions. 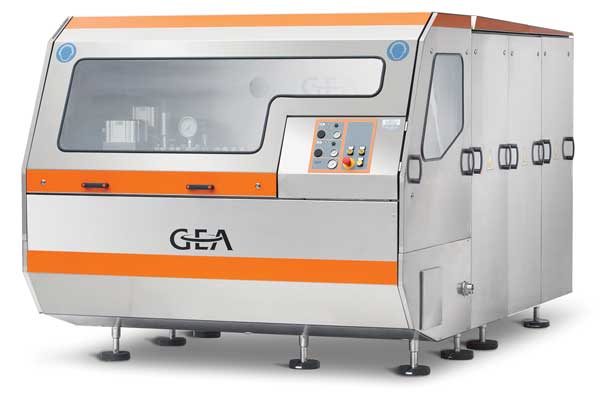 In 2017, GEA launched its GEA Ariete Homogenizer 5400 as the world’s most powerful homogenizer. This five-piston homogenizer can process 80,000 liters per hour at 120 bar.

Looking to the Future
The rising popularity of natural emulsifiers continues to spur growth in the global market for emulsifiers. For those interested in learning more about natural emulsifiers as alternatives to synthetic ingredients, IFT offers a webcast on this subject available at https://bit.ly/2HKViEa.

The combination of increased demand for healthy foods and low-fat foods will continue to drive innovation in emulsion systems. The potential for nano, micro, Pickering, and multilayer emulsions has only recently begun to be tapped in food systems and is expected to expand significantly during the years ahead for production of healthier, higher quality, and increasingly stable foods.