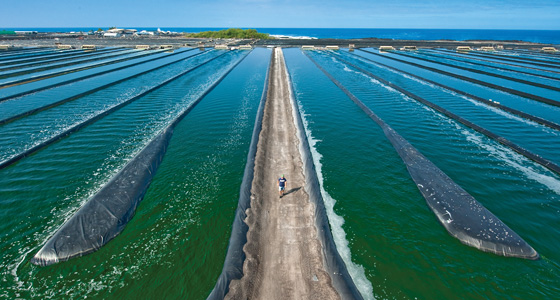 This month’s column adds to our “How is it processed?” series with a dive into edible algae. People have consumed algae for centuries, and it continues to be a major component of the current food industry.

I wish to thank my co-author, Amanda Sinrod, food specialist at the U.S. Department of Agriculture, Agricultural Research Service, for contributing to this column.

All algae species fall into one of two primary categories according to their size. Microalgae are typically unicellular and grow between 3 and 10 micrometers. Macroalgae, commonly referred to as seaweed, are large sea plants with some varieties growing 70 meters long. Algae are then sorted by their pigment compounds and morphological characteristics into groups such as red, green, brown, and blue-green algae.

Algae provide valuable nutrients to the human diet. They are rich in dietary fiber, such as beta-glucan, and some species have significant amounts of protein of higher quality than plant sources like beans and grains. Some algae produce plentiful polyunsaturated fatty acids such as omega-3 fatty acid. Algae also contain vitamins and minerals.

Chile is the largest commercial algae producer, followed by China. The edible seaweed market was valued at $5.1 billion per year with 7.5 to 8 million metric tons of seaweed harvested for food annually. Seaweed hydrocolloids like agar, alginates, and carrageenan represent nearly 40% of the world’s hydrocolloid market. 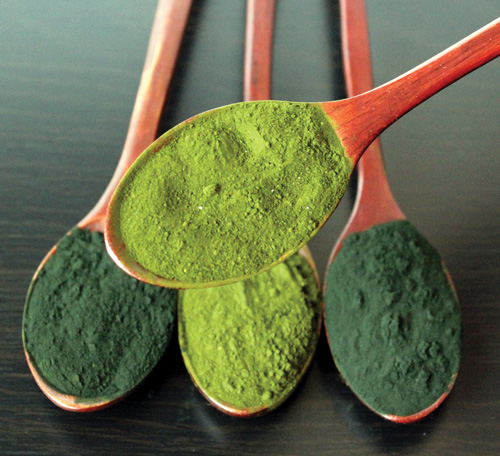 Microalgae
The FDA has designated a handful of microalgae species as GRAS (Generally Recognized As Safe); they are used in commercially available foods and supplements. Tetraselmis chuii is used as a seafood flavoring agent, Odeontella aurita is sold as a dietary supplement, and Crypthecodiuium cohnii produces DHA as a replacement for fish oil supplements.

Arthrospira, colloquially called Spirulina, and Chlorella have gained increasing hype as novel protein sources. Arthrospira and Chlorella have balanced amino acid profiles that include the essential amino acids. These proteins are similar to those in eggs and soybeans, making them well suited for the human diet. Additionally, Arthrospira and Chlorella contain significant amounts of polyunsaturated fatty acids, minerals, and vitamins. Studies have shown that these microalgae can be incorporated into extruded snacks and pastas to improve their nutritional content and can also act as a decolorizing agent in bread.

Processing of Macroalgae as a Food Ingredient
Evidence of people eating seaweed dates back to the fourth and sixth centuries in Japan and China, respectively. A variety of seaweed species play pivotal roles in culinary traditions around the globe. With globalization and the internationalization of food markets, the use of edible seaweed and its acceptance as a food source have spread.

Hiziki (Hizikia fusiforme) is one interesting example of a commonly consumed seaweed. This brown macroalgae is harvested from the wild in Japan and cultivated in South Korea. After harvest, the seaweed is washed with seawater. Hiziki carries strong bitter and astringent flavors caused by its dark pigment compounds. To make it palatable, Hiziki is boiled with Eisenia bicyclis or Ecklonia cava, two milder species of brown seaweed, for 4–5 hours. This allows the hiziki’s pigment compounds to be replaced with the pigments from Eisenia or Ecklonia. The hiziki is then further steamed for 4–5 hours to eliminate phlorotannins. At this stage, the hiziki is cut and sun dried into a stable product called hoshi hiziki. Processed hiziki is commonly soaked for 10–15 minutes and added to stir-fry dishes or cooked with vegetables and tofu.

Processing Macroalgae Hydrocolloids
Many macroalgae species grow in turbulent waters and produce hydrocolloid compounds that provide the necessary flexibility and elasticity to prevent breaking in the rough currents. These hydrocolloids, including agar, sodium alginate, and carrageenan, are utilized extensively in the food industry for their gelling and thickening capabilities.

Seaweed hydrocolloid extraction began with agar in 1658 when the Japanese discovered its gelling properties. Commercial agar is primarily comprised of agarose polysaccharide as it produces stronger gels than agaropectin, the other agar compound produced by seaweeds.

Agar is extracted from Gelidium and Gracilaria red seaweeds. Gelidium is harvested from wild growths in Spain, Portugal, Morocco, South Korea, Japan, Indonesia, and Mexico. Gracilaria, however, is cultivated in China, Indonesia, Canada, and Chile.

Both seaweeds’ processing begins with washing to remove debris such as sand, shells, and small creatures. To extract the agar, Gelidium is heated at 105°–110°C for 2–4 hours in either fresh water or water containing dilute acid. Pressure can also be used during extraction to increase agar yield and extraction efficiency. Gracilaria produces agar with weaker gel strength and therefore must be pretreated in a 2%–5% sodium hydroxide solution at 85°–90°C for 1 hour to strengthen the agar to commercially acceptable quality. The Gracilaria is then washed and neutralized with weak acid before being extracted in water at 95°–100°C for 2–4 hours. The extracts from both species then undergo coarse filtration followed by fine filtration through a fitted filter press to remove the macroalgae solids. The resulting solution is roughly 1% agar with the remainder containing salts, colorants, soluble carbohydrates, and water. The mixture is cooled to form a gel. This gel is then soaked in water to remove the soluble salts through osmosis. The color can be optionally removed through bleaching and washing.

One of two methods, freeze-thaw or syneresis, is used to concentrate the agar. For freeze-thaw water removal, the gel is slowly frozen to produce large ice crystals. These crystals disrupt the gel’s structure and allow the water and dissolved impurities to drain from the gel. This increases the agar concentration to 10%–12%. More water can be removed with a hydraulic press; however, the remaining gel is typically hot-air dried without pressing.

Syneresis, a term for liquid leaking from a gel, is cheaper than freeze-thaw as it is less energy intensive. In syneresis, the agar is gradually squeezed between cloth-covered metal plates in a hydraulic press for 24 hours, increasing the agar concentration to 20%. The gel is then shredded and hot-air dried. Dried agar is milled, usually to 80–100 mesh size, or sold as strips.

To form a gel, agar dissolves in boiling water and sets at 32°C–43°C. Agar gel’s high temperature stability is advantageous as it does not melt in hot climates; however, it also affects mouthfeel as it does not melt in the mouth. Agar is tasteless and has low caloric value. Agar is widely used as a stabilizer for baked goods and as a thickener for pie fillings, meringues, icings, and dairy products.

Sodium alginate and carrageenan are other macroalgae hydrocolloids readily used in the food industry, each with unique extraction and purification processes. Sodium alginate is extracted from multiple species of brown seaweeds’ cell walls. Added cations, such as calcium, bind the alginate molecules together to form a gel structure. Sodium alginate, therefore, does not require heat to gel and does not melt with heat, offering several advantages for certain food products. Sodium alginate is used as a binder in restructured foods like chicken nuggets and as a stabilizer for foams such as beer head and whipped cream.

Carrageenan is extracted from red seaweed and exists in three forms, kappa, lambda, and iota, which have their own gel strengths and properties. Carrageenan is widely used in the dairy industry as the negatively charged carrageenan molecules react with the positive proteins in dairy, like casein, to form a gel network. Carrageenan prevents the whey separation in ice creams caused by added gums and helps stop fat and protein separation in UHT sterilized milk. Iota carrageenan is used to suspend cocoa particles in chocolate milk as it forms a gel with thixotropic flow, enabling the gel to thin as it is stirred and to re-gel as it sits.

Safely Consuming Seaweed
Algae hold a rich history in human diets and continue to be utilized in new and safe ways that advance the food industry. However, as with many novel food ingredients, the risks of algae consumption must be assessed regarding contaminants, toxins produced during processing, and potential allergens to ensure their safety.

Amanda Sinrod is a food specialist at the University of California, Davis,
and USDA Agricultural Research Service
([email protected])