When your mouth puckers after a sip of red wine or a cup of unsweetened green tea, you’re experiencing a taste sensation called astringency. It’s a tactile reaction in your mouth, described by the Encyclopedia of Food Sciences and Nutrition as “a dry, rough feeling,” marked by a “contraction of the tongue tissue.” While that sensation might be desirable if you’re a winemaker or tea brewer, it’s not the right taste for every food manufacturer.

Pea protein causes a similar astringent taste reaction, much to the chagrin of the plant-based food industry. When plant-based product companies use pea protein in a burger or other meat substitute, they don’t want consumers sensing a dry mouth two bites into a juicy burger. Whey, a dairy byproduct, also causes astringency, which becomes a problem if you’re adding high amounts of the protein in nutritional shakes.

A multi-year collaboration between Motif FoodWorks and scientists at King’s College London and Imperial College London is looking into the science behind that unwanted astringency. The research partnership was spearheaded by Stefan Baier, head of food science at Motif FoodWorks, which develops plant-based ingredients. The project also receives funding from an interdisciplinary United Kingdom doctoral program and a grant from Imperial College.

Staffed with a mechanical engineer and an oral biologist, the team set about replicating a working human mouth in order to “feed” it pea and whey proteins, and then study the interactions between the salivary proteins and the chemicals in isolated pea and whey. “If you can understand it, you can maybe control it,” says Tom Reddyhoff, a senior lecturer at Imperial College in London and the lead mechanical engineer on the project.

"When plant-based product companies use pea protein in a burger or other meat substitute, they don’t want consumers sensing a dry mouth two bites into a juicy burger."

Reddyhoff’s specialty is tribology, the study of friction. He describes it as essentially just “rubbing things together and finding different ways to see what’s going on inside.” He first came to the study of experimental tribology as a PhD student, going on to create research experiments in both the automotive and food industries. “The nice thing about it is you can sort of apply the same techniques and the same principles to study lots of different areas,” he says.

In this case, the surface is the mouth, and the liquid is the saliva. For the project, Reddyhoff and his postdoctoral student recreated the inside of a human mouth using an elastomer, a moldable polymer. In past experiments, he’d sometimes used a tongue from a butcher. “It’s a bit grisly,” he acknowledges.

Guy Carpenter, the oral biologist on the team, is an expert in saliva research based at King’s College London.  These particular food proteins are somewhat perplexing, Carpenter says, because the polyphenols in pea and whey aren’t quite the same as the ones in red wine or tea, yet they still cause this reaction. And even more paradoxically, in these culinary contexts, your mouth feels dry, but it actually isn’t, says Carpenter. “It’s not like we’ve run out of saliva.” Yet that’s still the way it feels.

“Saliva can be quite complicated to study,” he says, because it’s not just a matter of the components of the liquid but also how it lubricates, the interactions between the salivary proteins and the food as it moves around and through your mouth. Prior to studying astringency, Carpenter studied saliva in the context of human disease, conditions that cause dry mouth.

"If you can understand it, you can maybe control it." 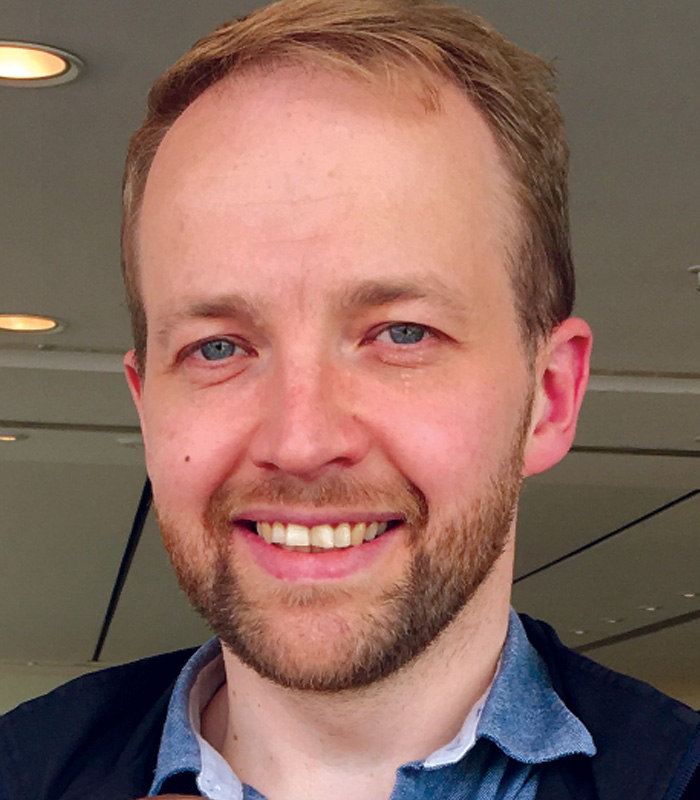 On this project, Carpenter and his postdoctoral student have been analyzing the chemical interactions between the food and salivary proteins. “The food protein has interacted with the salivary protein, which causes this change in the shape or the structure or the function—obviously, we haven’t worked that out yet—but that’s caused a change in how well it lubricates, which we then pick up as a dryness.”

The team’s work has not yet been published, though a paper has been submitted.

Carpenter thinks the way the protein is manufactured could be the answer. “It’s starting to look like how the manufacturer prepares the protein can have an impact on how astringent it’s going to be perceived by the consumer.”

Recognition: For his work in developing a range of experimental methods used in combination with numerical modeling, he has received the Tribology Trust Bronze Medal, a Taiho Young Tribologist Award, and two best paper awards.