One of the biggest comments we get from incoming students is ‘Oh, if I would've known food science existed, that’s what I would’ve majored in. I didn’t know.' 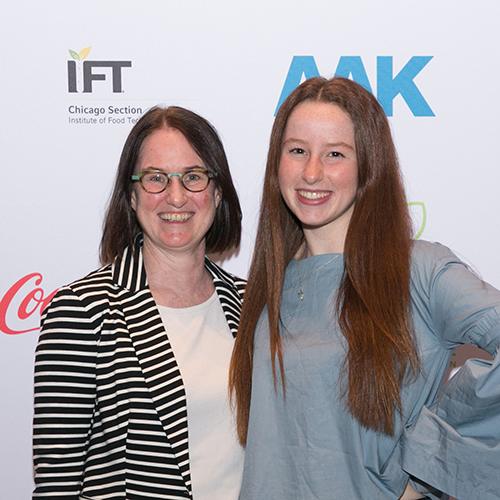 According to the 2018 Food Science Academic Knowledge Base, 32 percent of undergraduates said family members or family friends were very important influencers in their decision to pursue a major in food science. That was most definitely the case in the Carroll household.

Longtime IFT member Maureen Carroll is a food scientist and attorney, with extensive experience in food law. She is currently associate general counsel, regulatory and food law for Post Consumer Brands. Her daughter Molly, now a sophomore at Purdue University, is following in her footsteps and studying food science. Molly was also the 2018 recipient of Feeding Tomorrow’s Past Presidents Scholarship, just like her mother was as an undergraduate.

Growing up in Plymouth, Minn., Molly said she would do food science experiments with her mother as a fun activity. “That really fostered my interest in food science,” said Molly. “I also realized I was interested in chemistry, organic chemistry, and biology.”

At age 15, Molly attended her first IFT Annual Event and Food Expo where Maureen was presenting a short course on food regulation laws. Molly attended a session called “Food Science for Non-Food Scientists” and was hooked. But, she says, she’s learned it’s a relatively unknown major, and only people who know someone in the field knows it exists.

That is something she hopes to change as a food science mentor at Purdue, where she gives tours to incoming first-year students and introduces them to the major. “One of the biggest comments we get from incoming students is ‘Oh, if I would've known food science existed, that’s what I would’ve majored in. I didn’t know,’” Molly said.

According to Molly, it’s important to get the word out because with population growth and the deepening effects of climate change, feeding the world’s population will become an even greater challenge in the future.

“Food scientists are going to be at the forefront of figuring out solutions to these problems,” she explained.

This past summer, the mother and daughter duo attended IFT’s Annual Event and Food Expo in New Orleans together. It was there that Maureen told Molly she had also received the IFT Past President’s scholarship. It added a new layer of meaning to a scholarship that Molly already felt grateful for.

“To be able to attend Purdue for food science, I needed the help from scholarships because I’m paying for my own education. This scholarship means I can continue exploring my interest in food science and continue learning and doing what I actually want to do,” she said.