It is the meal that consumers most often skip during the day, yet its role in proper nutrition is essential. "Breakfast is important to everyone’s overall health and performance," says information from the American Dietetic Association. "It is an early-morning refueling stop for your body. Studies show breakfast eaters tend to have more strength and endurance, and better concentration and problem-solving abilities." 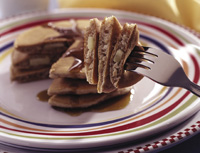 Additional benefits of eating breakfast have also recently been observed for children and weight management. "Research indicates that eating breakfast improves attention levels in school kids," says Lola O’Rourke, ADA spokesperson. For example, a study conducted by Tufts University found that when children ages 9–11 ate instant oatmeal for breakfast, as compared to eating a cold cereal or no breakfast, they did better on some tasks of memory (Quaker Oats, 2001). More than two-thirds of the children performed better on tasks of spatial memory when they ate oatmeal vs no breakfast.

"Eating breakfast is also a good weight management tool, since skipping breakfast can lead to extreme hunger and unplanned snack consumption, often of high-calorie foods," adds O’Rourke. "In addition, data from the National Weight Control Registry show that people who are successful at losing weight and keeping it off are regular breakfast-eaters. Other data indicate that people who eat breakfast have better overall nutrient intakes than breakfast-skippers."

The importance of breakfast is undisputed. The breakfast foods market, estimated at just over $23 billion in 2004, is a multifaceted market driven by consumers' need for relatively healthful foods that are easy to prepare and eat, according to Mintel (2004). "Cereal bars are rapidly increasing in popularity, as they are the ultimate on-the-go item. Other items that are increasing in popularity are complete microwavable meals, particularly breakfast sandwiches that do not require utensils to eat," the report says.

In the consumer’s quest for breakfast that is both convenient and healthy, what constitutes a balanced breakfast? "It’s important to include some protein and a small amount of healthy fat in the breakfast meal; this will add staying power and help carry you through the morning," says O’Rourke. Consumers should aim for a good variety of nutrients, by including fruits and/or vegetables, whole grains, and dairy or protein foods," she notes.

Whole Grains
The 2005 Dietary Guidelines for Americans recommends that Americans consume three or more servings of whole grain each day, but according to information from General Mills, 9 out of 10 Americans fall short of getting the recommended three servings.

Whole grains contain vitamins, minerals, phytonutrients, antioxidants, fiber, and protein. Joanne Slavin, Professor in the University of Minnesota Dept. of Food Science and Nutrition, discussed some of the biological mechanisms behind the benefits of whole grains, such as protection against cancer, cardiovascular disease, diabetes, and obesity (Slavin, 2003): "First, whole grains are concentrated sources of dietary fiber, resistant starch and oligosaccharides. Second, whole grains are rich in antioxidants, including trace minerals and phenolic compounds, and these compounds have been linked to disease prevention. Additionally, whole grains mediate insulin and glucose responses. Finally, whole grains contain many other compounds that may protect against chronic disease. These compounds include phytate, phyto-oestrogens such as lignan, plant stanols and sterols, and vitamins and minerals."

In addition to heart disease and certain cancers, whole grains may play a role in maintaining a healthy body weight. Liu et al. (2003) found that weight gain was inversely associated with the intake of high-fiber, whole-grain foods but positively related to the intake of refined-grain foods. Pereira et al. (2002) looked at the consumption of whole grains and its effect on insulin sensitivity in overweight and obese adults and concluded that sensitivity may be an important mechanism whereby whole-grain foods reduce the risk of type 2 diabetes and heart disease.

Breakfast foods, particularly cereals, have jumped on the whole-grain health wave as consumers grow more aware of the benefits of eating whole grains. In September 2004, General Mills, Minneapolis, Minn., announced that it would make all of its Big G breakfast cereals with whole grain. In January of this year, Kellogg Co, Battle Creek, Mich., introduced a new whole-grain cereal for kids, Kellogg’s Tiger Power, which includes protein, calcium, and iron, as well as fiber. Nestlé recently announced that by June 2005, its breakfast cereals in the UK would be made with whole grains.

Vitamins and Minerals
Whether it is cereal or a breakfast bar or beverage, it is highly likely that it is fortified with certain vitamins and minerals, but which ones? "We can’t have 100% of everything in a single serving of any breakfast food," observes Ram Chaudhari, Senior Executive Vice President and Chief Scientific Officer at Fortitech, Schenectady, N.Y. "There has to be some kind of balanced approach. This is what I see worldwide, a more balanced approach with vitamins and minerals."

In terms of vitamins, Chaudhari feels that because of consumers’ quest for energy, B vitamins should be added to breakfast foods. "Due to our fast-paced lifestyle, we are looking for an energy boost. Energy boosters like the B-complex vitamins, should be a part of any breakfast beverage, nutrition bar, or cereal bar." These consist of B-6, B-12, and folic acid, which are also cardio-friendly. B1, B-2, niacin, biotin, and pantothenic acid are required for energy for the metabolic cycle, he explains. In addition, he suggests that it may also be a good idea to include some vitamin C and vitamin E, which function as antioxidants, especially in breakfast beverages.

Calcium, vitamin D, and vitamin K, for their beneficial role in bone development and osteoporosis, are often associated with fortified breakfast foods. However, others include iron, magnesium, zinc, and copper. "These should be part of breakfast to some extent, around 25–30% of the daily requirement," says Chaudhari. Other minerals growing in popularity include selenium, chromium, and molybdenum.

Chaudhari observes that there is much innovation going on in terms of vitamin and mineral fortification of breakfast foods. "Some of these nutrients don’t taste good. You have to have a good-tasting, nutritious, convenient product where the vitamins and minerals are bioavailable as well. We see a lot of coated material, micro-encapsulation, and taste-masking agents, including different flavors, making it easier to fortify with vitamins and minerals."

Proteins
Although the low-carb trend appears to be on the decline, protein intake is still important and plays a role in breakfast nutrition. While soy protein has proven itself to be a healthy ingredient in many types of breakfast foods, others, such as whey and rice protein, are setting foot into breakfast foods.

Extrusion technology has added innovation to the use of soy protein in breakfast foods, says Riaz. "Interesting foods coming to the market are products made from fibrous protein. Fibrous protein is made from soy protein and other ingredients that are extruded into small pieces. The fibers are extracted using a meat chopper and can be used in making whole chicken, chicken breast, or other meat items that can be used for breakfast."

• Whey protein is gaining attention as a nutritious protein source. Whey proteins provide 26 g of the branched-chain amino acids (BCAAs) leucine, isoleucine, and valine per 100 g of protein, according to Dairy Management Inc. BCAAs are unique among amino acids in their ability to provide an energy source during endurance exercise. In addition, emerging research suggests that higher daily intakes of high-quality proteins and their amino acid components, especially the higher amounts of leucine found in whey protein, may help people on a reduced-calorie diet preserve lean muscle mass while burning fat more effectively than those who just cut calories while consuming lower amounts of protein.

According to DMI, farmer-supported research has brought about innovative types of whey protein ingredients for breakfast foods. For example, textured whey proteins can be used as inclusions in cereal and bars, increasing the total amount of protein, lowering the carbohydrate levels, and improving the texture. Researchers at Cornell University have used supercritical fluid extrusion at low temperatures to create expanded products containing whey protein concentrate. Research at Utah State University has led to the commercialization of a patented whey protein crisp, WPCrisp, manufactured by Grande Custom Ingredients Group, Lomira, Wis. It is made by extruding a combination of whey protein and an edible polysaccharide, such as cornstarch, through a twin-screw extruder.

• Rice protein is hypoallergenic and highly digestible and has a balanced nutritional profile. New soluble rice proteins were recently introduced by A&B Ingredients, Fairfield, N.J., making it easier to fortify liquid food systems, such as breakfast beverages. One interesting characteristic of soluble rice protein is that it has no functionality, such as gelling, emulsifying, or whipping. Therefore, it can be used without affecting the processing and/or structure of the end product.

As consumers recognize the importance of breakfast, ingredients such as whole grains, vitamins, minerals, and proteins will help them start their day off healthier.