Is cooking a vanishing art in the United States? Despite the proliferation of cooking shows, cooking magazines, cooking classes, and cookbooks, less and less actual cooking may be taking place in American homes (Visser and Stark, 1989; Scrivani, 2005; Scattergood, 2006; Severson and Moskin, 2006). 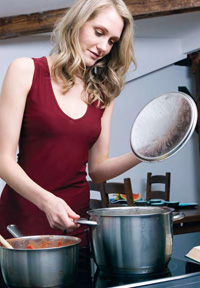 Some cultural observers worry most about the apparent demise of the home-cooked dinner, arguing that regular family meals improve children’s nutrition, achievement, and well being (Neumark-Sztainer et al., 2004; RMC, 2005; Weinstein, 2005). The actual frequency of cooking is difficult to measure. Of course, there are considerable survey data on food preparation and consumption (Sloan, 2006), but people may not accurately report their behavior, for a variety of reasons (Rathje and Murphy, 1992; Rathje, 1979, 1984a, b; Ritenbaugh and Harrison, 1984).

As a researcher at the Center on Everyday Lives of Families (CELF) at the University of California–Los Angeles, I had the chance to directly observe meal preparation activities. As part of a large study on middle-class working families in Los Angeles (Ochs et al., 2006, 2007), CELF researchers filmed the daily activities of 32 families for a week in their lives. I used the weeknight video footage to investigate what families had for dinner, who prepared the meal and how, and how much time they spent. I found that these working parents spent a substantial amount of time cooking dinner, even when they opted to serve “convenience” foods rather than cook meals from scratch. My findings are described in general below, and appear in more detail elsewhere (Beck, 2007).

Activities Observed
CELF researchers studied 32 Los Angeles families between 2002 and 2004 to better understand how busy families balance work demands with family life. All of the families who volunteered to participate had at least two children, one of them 8–10 years of age. They owned their own homes and had an annual income of at least $45,000. Both parents in these families each worked at least 30 hours a week, and most worked considerably more.

Over the course of the study, we filmed dinner preparation and consumption on two weeknights for each family. Although our observations may well have influenced participant behavior, neither participants nor researchers knew that food preparation would later be studied in detail.

Of 64 weeknight dinners that were filmed, 45 (70%) were cooked at home and did not include any food from a restaurant. Most (19%) of the other meals contained take-out food, and the rest were eaten in a restaurant or a relative’s house. The following results were based on the 45 home-cooked dinners.

• What Families Ate. Home-cooked dinners almost always contained at least one protein source, one starch, and one vegetable, conforming to the “ideal” meal structure in the U.S. (Dimmick, 2003). In 80% of the meals, the protein was meat or poultry (other options included fish, a commercial vegetarian meat substitute, or cheese). Fruit was also served in 20% of the dinners. Although older U.S. cookbooks include a separate salad and dessert in an ideal dinner menu (Levenstein, 1993), these appeared in less than a quarter of the meals in our sample.

It is difficult to summarize the wide variety of main courses, but I tried anyway, asking my CELF colleagues to group the main courses using a similarity sort technique borrowed from psychology. We arrived at four general categories. The first contained frozen entrees and other convenience foods. The second contained simple homemade meat entrees such as grilled chicken, baked chicken, and pork chops. The third was a diverse category with tacos and burritos, sandwiches, and soups. The fourth might be best described as “starch with sauce,” including pasta dishes as well as a stir-fry.

The sheer variety of main courses served was made possible by commercially prepared dishes, which enable a consumer to trade money for time and cooking expertise. For example, East or Southeast Asian dishes (seen in 20% of home-cooked meals) were almost all packaged, commercially prepared items.

• Who Cooked Dinner. The mother was the sole or primary cook for most dinners. Mothers participated in preparing 91% of weeknight dinners, compared to 33% for fathers (Ochs et al., 2007). One person generally cooked at a time, although in 18% of meals both parents worked together in the kitchen simultaneously.

Children in our study often didn’t observe weeknight food preparation, much less help with it. Children were in the kitchen for an extended period during meal preparation for less than half the dinners. When there, they were usually at the kitchen table doing homework. They helped with only five meals (11%), and never for the entire meal. In two cases, they helped only with their own food, by assembling or heating up a dish for themselves. In the other three cases, a child tossed a salad, cut an onion, or cut a cucumber. Two of these children volunteered their help. 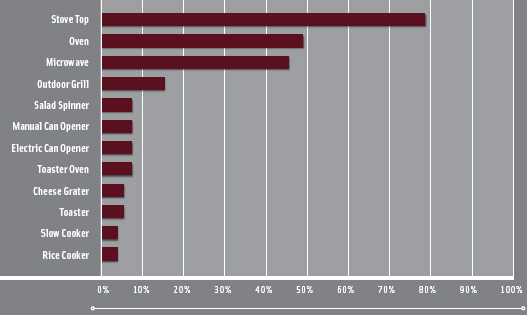 • What Cooks Used. The most popular appliances were the stovetop (used in 78% of home-cooked meals), oven (49%), and microwave (47%), as shown in Figure 1. Tools such as a cheese grater (4%), rice cooker (2%), and slow cooker or Crock Pot™ (2%) appeared only infrequently. Some of these low-use patterns were due to reduced processing of raw ingredients at home. For example, use of grated cheese was common, reducing the need for cheese graters. In a similar vein, use of pre-washed salad greens was more common(18% of meals) than a salad spinner for washing them (7%).

Even when cooking from scratch, cooks in our study rarely referred to cookbooks or other printed media. During the observations, only three cookbooks were used, by three families, to prepare three different meals. In contrast, cooks very frequently referred to package directions, suggesting that in most routine family dinners, the role of cookbooks may have been supplanted by printed instructions on food packaging.

Convenience foods were almost equally likely to be the protein, starch, or vegetable component of the meal. The most popular convenience foods in “home-cooked” meals were frozen entrees (such as stir-fry mixes, chicken dishes, and barbequed ribs in 13 meals), ready-to-serve vegetables (canned or frozen in 12 meals), specialty breads (ready-to-eat, parbaked, or available as a dough or mix in 13 meals), canned soup (in 5 meals), and ready-made pasta sauce (in 5 meals).

• How Long It Took. Time was measured in two ways: hands-on time and total time. The hands-on time was the time spent physically engaged in meal preparation and included such tasks as finding ingredients and tools, cutting ingredients, and stirring a pot. The total time included all of the time elapsed between the start of preparation and the completion of the last dish prior to serving; this included passive cooking time as well as hands-on time. Timing focused on the food preparation alone; related tasks such as setting the table, getting the family to the table, and serving plates were not included.

Hands-on time was 12 min less on average when cooks relied heavily on convenience foods than when they cooked from scratch, a difference that is statistically significant although relatively small. Twelve minutes may well be enough to influence purchasing and cooking behavior. “When we’re exhausted,” write Mills and Ross (1997) in Desperation Dinners!, one of the few cookbooks used during the study, “if the 20 minutes we bargained to spend cooking starts turning into 35, that’s enough to finish us off.” There was no statistically significant difference in total preparation time, however, which was surprising.

Convenience foods did not save more time in our study, I suggest, because not all cooks using them were primarily concerned with saving time. Clearly, many of these products can save time. Very short hands-on times (13–22 min) were usually only possible in this study with heavy use of convenience foods. However, some cooks who used convenience foods were willing to invest considerable amounts of time—up to 58 min of hands-on time and 73 min of total time. The latter group may enjoy cooking, or prefer to eat items that take longer to prepare, or have other motives for their use of convenience foods besides time constraints during cooking.

Some “convenience foods” in the study required substantial time inputs. For example, a chicken-and-dumplings mix required a lot of handling of ingredients and a long cooking time. In other cases, the product itself could have been served relatively quickly, if it had been served “as is,” but the cook spent additional time manipulating it to make a different dish. Examples include fish tacos made with frozen fish sticks, a baked pasta dish including commercial tomato sauce and pepperoni, or “pigs-in-a-blanket,” hot dogs wrapped in biscuit dough and baked. Cooks in our sample often avoided processing raw ingredients, as seen in their use of kitchen tools and convenience foods, but many still wanted to be creative when preparing the family meal.

All of this suggests that the work of planning and shopping for meals may be more of an obstacle to home cooking than the time spent actually preparing the meals. Processed foods have a longer shelf life than fresh foods, so shopping can be performed less frequently. “Meals in a box” either have all required ingredients or clearly list remaining items on the package itself, so there is no need to prepare a detailed shopping list. These families might appreciate innovations designed to reduce shopping frequency and planning investment and increase food shelf life. Existing approaches include free recipes in stores alongside the ingredients themselves and protective packaging of fresh vegetables.

This study was part of an interdisciplinary, collaborative research endeavor conducted by members of the UCLA Center on Everyday Lives of Families (CELF), under the direction of Elinor Ochs. CELF is generously supported by the Alfred P. Sloan Foundation program on the Workplace, Workforce, and Working Families, headed by Kathleen Christensen. The author gratefully acknowledges Elinor Ochs and CELF faculty, staff, and graduate students for their fieldwork efforts, comments, and other assistance. A major debt is owed to the working families who participated in this study for opening their homes and sharing their lives.

Ochs, E., Shohet, M., Campos, B., and Beck, M. 2007. Coming together at dinner: A study of working families. In “Why Workplace Flexibility Matters: A Global Perspective,” ed. B. Schneider (in press).

Rathje, W.L. and Murphy, C. 1992. “Rubbish! The Archaeology of Garbage: What Our Garbage Tells Us About Ourselves.” HarperCollins Publishers, New York.