Reams of paper have been used to present equations for describing drying or dehydration of foods, but still it seems that many approaching the subject struggle with understanding what occurs and how best to develop a drying process. Here is a brief tutorial. 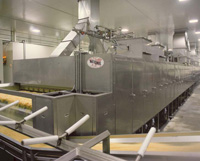 Why Dry?
One of the more obvious motivations for drying foods is to preserve perishables by reducing the water activity (aW) below that needed by pathogens or spoilage microorganisms to grow; this level varies with the food and the microorganism but is generally below about 0.6. Water activity is related to but not equal to moisture content. It is measured experimentally and is equal to the relative humidity of the atmosphere at a given temperature with which a food material with a given moisture content is in equilibrium; i.e., neither the food nor the atmosphere changes in weight after being in contact, in a closed container, for some time.

Drying also reduces weight, may reduce volume, and may cause other changes that are more or less desirable, such as color changes. For example, baking is a drying process in which color and flavor changes are desirable. For dried onions, on the other hand, the objective is to maintain a light color if possible.

Some drying processes convert a liquid into a powder that is not only more stable but also more convenient to use, such as soluble coffee or dried milk.

Drying Basics
Water, or occasionally another liquid such as a solvent, is removed from a solid matrix by converting it into a vapor and removing the vapor from the chamber in which the wet material is placed. The conversion of liquid to vapor requires energy, the heat of vaporization, which for water is about 1,000 BTU/lb. Delivery of this energy to the liquid requires heat transfer, which may be by convection, radiation, conduction, or a combination of several mechanisms.

The heat source may be burning natural gas (or, rarely, another fuel) in air, indirect heating with steam or electricity, or solar energy. Heat transfer is governed by the temperature difference between the heat source and the surface of the wet material. In the case of conduction and convection, the rate is proportional to the temperature difference. In the case of radiation, the rate is proportional to the difference between the absolute temperatures each raised to the fourth power.

So long as there is free moisture at the surface of the material, the surface temperature is equal to the wet bulb temperature—the temperature of a water-saturated wick that is in equilibrium with the humidity of the surrounding air. This can be found from psychometric charts, which give the properties of water in air at various temperatures and humidities.

In the early stages of most drying processes, there is enough free moisture, and it migrates easily enough to the surface, that the surface is "wet" and the removal of moisture occurs from the surface. As drying proceeds, and moisture is removed, the interface at which liquid is converted into vapor retreats within the wet material.

So long as the surface is wet and other conditions remain constant, the rate of removal of moisture—the drying rate—is constant. For most materials, there is a moisture content, called the critical moisture content, at which the drying rate begins to decline because of the previously mentioned retreat of the liquid–vapor interface. While not quite correct, it is useful to picture a retreating interface leaving behind, from the surface inward, a dry layer that is both a thermal insulator and a barrier to vapor diffusion. It is the growth of this layer that causes the drying rate to decline.

The exact mechanism of mass transfer inside the dried layer varies with materials and conditions and probably involves vapor diffusion, capillary diffusion of liquid, and adsorption and deadsorption of water on the dried surface. In practice, it is usually modeled as vapor diffusion with a diffusion coefficient that is smaller than that for free diffusion in air, because of the additional resistance of the porous dried layer.

How to Affect Drying Rates
Given this admittedly brief description of the governing rates, what can be done to affect drying rates? First, it is necessary to understand potential constraints. For economic reasons, it is common to want to achieve the highest possible drying rates, but other considerations may apply. For example, the most obvious way to increase heat transfer is to increase the temperature of the heat source. However, as previously mentioned, there may be concern about color development in certain foods, while others may scorch or burn if heated too much.

Lowering the humidity of the environment lowers the surface temperature as long as there is free water at the surface, so this can increase the temperature driving force and also increases the mass transfer driving force. However, there is a cost associated with this approach. Incoming air can be dehumidified by cooling or by using adsorbents, but then it takes additional energy to heat the cold air or regenerate the adsorbents. Air that has picked up moisture can be discharged, but that means throwing away the energy it contains. In practice, hot air is normally recirculated to save energy, but this allows humidity to build up somewhat. Enough air is discharged to exhaust the moisture that is removed, typically by adjusting dampers.

Increasing air velocity would appear to be another way to improve heat and mass transfer because heat and mass transfer coefficients typically increase with velocity. However, experimentally, air velocity usually has only a small effect on drying rate. There are also constraints on it, including the cost of operating blowers and the risk of blowing dried product off the trays or belts.

One option is to reduce the critical dimensions of the material. Thus, vegetables are sliced thinly or made into relatively small cubes. A drum dryer spreads a thin layer of liquid or paste over a heated metal drum and scrapes a dried flake off after one revolution. A spray dryer creates small droplets from liquid or concentrate which fall through heated air and are collected as a fine powder.

Lowering the pressure by drawing a vacuum lowers the temperature at which water vaporizes and also reduces the resistance to vapor flow in the dried layer, thus increasing the drying rate. Maintaining a vacuum adds the cost of running a vacuum pump or steam ejector and, usually, of removing water from the exhausted air to reduce the load on the pump.

Bucher-Guyer AG of Niederweningen, Switzerland (www.bucherfoodtech.com) offers a vacuum belt dryer which uses molecular sieves to remove the moisture from the exhausted air. In a twist that is reminiscent of my own graduate research, they recover the heat of adsorption and use it in the dryer.

Freeze drying is the process of maintaining conditions such that water is frozen and sublimes directly from ice to vapor. This avoids the collapse that occurs in many foods when they are normally dried, as moisture is removed and the remaining matrix sags to fill the voids. Freeze drying also prevents case hardening, which occurs as solubles migrate to the surface and are left behind. The more-open porous structure and the lack of surface case hardening means that freeze-dried materials rehydrate well. Because the process occurs below the triple point of water, about 0ºC (usually lower because of freezing point depression by dissolved solids), there is less volatile flavor loss and usually less undesirable color development.

To maintain freeze drying, the vapor pressure of water in the environment must be below 4.59 mm Hg, which is usually achieved by maintaining a high vacuum. However, freeze drying can occur at higher total pressures, and for some materials there may be benefits from using a slightly higher absolute pressure. The reason is that internal heat transfer often governs during freeze drying and a slightly higher pressure increases apparent thermal conductivity of the dried layer.

Drying Equipment
Drying equipment has been discussed in previous columns, most recently in the December 2006 issue. The most common industrial dryers are conveyor or belt tunnels, which may be multi-pass and which often have several temperature zones, cooling zones, and controls on air recirculation. Other dryer types include batch tray dryers, which may also use vacuum; drum dryers; spray dryers; fluidized bed dryers, in which air velocity is sufficient to entrain wet particles; tunnel dryers, in which trucks loaded with trays of food are pushed successively through a chamber; air impingement dryers, in which jets of heated air are directed perpendicular to the belt carrrying product to be dried, to increase heat transfer; and rotating tray dryers, in which wet powders are transferred, through holes in the trays, from one tray to another with plows.

Drying equipment requirements include sanitary design, so they can be cleaned; gentle material handling, as many dried foods are fragile; energy efficiency; flexibility of control; durabiliity; and cost effectiveness.