What is causing the sticky film on that melon? Or the dull varnish of that apple? Might it be a layer of gooey goodness akin to that of a glazed donut? Not likely, but it could be a biofilm. A biofilm is a thin layer of densely packed microorganisms encapsulated within an aqueous matrix of proteins, nucleic acids, and polysaccharides. Microbes in biofilms tend to flourish on moist surfaces, aggregating and forming colonies. 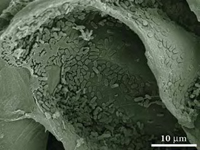 The plaque that forms on the teeth of a person with poor dental hygiene is a type of biofilm as is the slime that coats rocks near a stream or pond. Other types of biofilms serve as nourishment for larger organisms or as a component of sewage treatment systems that clean wastewater (MSU, 2008b, 2008c). In essence, any surface that combines an abundance of moisture and nutrients is susceptible to biofilm formation if microorganisms are present. This means that biofilms can affect virtually any industry that involves a water-based process: nautical shipping, paper manufacturing, cooling systems, drinking water facilities, health care, medical devices, and food processing (MSU, 2008a, 2008b).

Although biofilms can contain only one single-celled species, it is more common for them to comprise many bacterial species. Unlike humans from different ethnicities who often struggle to understand each other, the different bacteria forming a biofilm communicate well with each other. Through cell-to-cell signaling known as quorum sensing, bacterial cells coordinate biofilm formation. Biofilms enable bacteria to survive unpredictable environmental stressors such as temperature changes, desiccation, ultraviolet rays, and so on.

How Biofilms Form
The formation of a biofilm occurs in five stages. In the first stage, bacterial cells use van der Waals forces to attach to a surface (MSU, 2008a). In stage 1, cell attachment is still reversible, but in stage 2 the cells affix themselves more securely by forming exopolymeric material, which is a stronger adhesive compound. In stage 3, micro-colonies begin to form, and the biofilm begins to mature. Stage 4 involves more maturation, and the biofilm becomes a three-dimensional structure containing cells packed in clusters with channels running between them. And lastly, in stage 5 the biofilm disperses cells so that they can move on to initiate the formation of new biofilms. It is important to note that cell division is uncommon in mature biofilms. In the mature state, biofilm cells use energy predominantly to produce exopolysaccharides, which the cells use as nutrients (Watnick and Kolter, 2000).

Quorum sensing allows bacterial cells to collaborate in a way that benefits an entire biofilm population (Smith et al., 2004). The characteristic structure of micro-colonies affords biofilms a complex network of cells performing collectively as a living system. The channels between cell clusters deliver water and nutrients to each cell and facilitate waste removal. These characteristics combined with strong cohesive properties and sophisticated collaboration make biofilms highly resistant to conventional cleansing agents such as biocides and disinfectants. Biofilms also exhibit resiliency in the presence of chemical and physical stressors such as pH values, oxygen, pressure, heat, and cold. Moreover, biofilm cells can detach and inoculate other model food systems (Midelet and Carpentier, 2004). Not surprisingly, once biofilms form, they are difficult to eliminate.

Besides causing tooth decay, slippery rock surfaces, and contaminated water, these colonies of microbes may also cause persistent low-level food contamination (Annous et al., 2009). In fact, biofilms containing human pathogens can impair food safety. Capable of surviving for extended periods in water, animal manure, and various agricultural soils, human pathogens can attach to and colonize the surfaces of plants (Annous et al., 2009). Once they attach to plant surfaces, human pathogens can and often do form biofilms on plant tissues. Because biofilms are hearty and not easily removed with simple washing techniques, foodborne illnesses associated with fresh fruits and vegetables have increased dramatically over the past 30 years (Fett and Cooke, 2003; Sivapalasingam et al., 2004). In fact, up to 80% of bacteria on plant surfaces constitute biofilms (Lindow and Brandl, 2003). More than likely, the bacteria form biofilms to survive the unpredictable environmental stressors on the plant surface: temperature changes, desiccation, ultraviolet rays, etc. Three produce items—cantaloupe melons, apples, and leafy greens—have been identified as biofilm carriers as well as recurrent culprits for foodborne illness outbreaks.

Biofilms on Produce
As an excellent source of beta carotene and vitamins A and C, cantaloupe melons are a popular choice for a nutritious, mildly sweet snack. But on at least six different occasions, cantaloupe melons contaminated with Salmonella enterica have been the source of salmonellosis outbreaks. Although most victims recover without treatment, the symptoms of salmonellosis—abdominal cramping, diarrhea, and fever—last 4–7 days (CDC, 2008b). Cattle and poultry are usually infected with S. enterica, but some domestic animals such as cats and hamsters can also be sources of infection. Regardless of the source of transmission, after S. enterica attaches itself to cantaloupe melons, it begins forming biofilms after 24 hr when stored at temperatures between 10° C and 20° C (Annous et al., 2004, 2005). Sanitizers are ineffective at removing or inactivating S. enterica biofilms on cantaloupes, especially if the bug has remained on the rind for more than 24 hr (Ukuku and Sapers, 2001).

The adage “an apple a day keeps the doctor away” may not always ring true. Even though there have been no foodborne illness outbreaks associated with fresh apples, there have been seven instances of either apple juice or apple cider contaminated with Escherichia coli O157:H7 (Rangel et al., 2005). E. coli O157:H7 normally resides in the intestines of ruminant animals such as cattle, goats, and sheep. The symptoms of E. coli infections are usually mild and frequently involve severe stomach cramps, diarrhea, and vomiting, but some victims suffer more severe—and even life-threatening—complications (CDC, 2008a).

E. coli O157:H7 pathogens present on the surfaces of apples compromise the safety of the raw materials used for fresh juice and fresh-cut fruit. For this reason, the U.S. Food and Drug Administration (FDA) imposed a mandatory HACCP program for juice processors. Research indicates that washing apples with water and detergents or sanitizing agents measurably reduces the amount of E. coli on apples (Sapers et al., 2002). But industrialized washing techniques such as flatbed brush washers may not have the same effectiveness (Annous et al., 2001). The reason for the difference could be attributed to bacteria attaching to inaccessible regions such as the stem, core, and calyx of apples and to the formation of E. coli biofilms on apple surfaces (Fatemi et al., 2006).

In the never-ending quest to trim waistlines, many individuals rely on the consumption of fresh salads for slimmer physiques. Pre-packaged salads and minimally processed leafy greens may be important for a reduced calorie lifestyle, but as of late, they have also been the most frequent source of foodborne illness. The FDA has linked 18 outbreaks of E. coli O157:H7 to lettuce and one outbreak to spinach. Basil, cabbage, cilantro, green onions, and parsley are also responsible for recent occurrences of foodborne illnesses (MMWR, 2005). Hundreds of illnesses and even some deaths have resulted from these outbreaks. Commercial operations typically use triple-wash treatments and disinfectants to clean leafy vegetables. Nonetheless, conventional sanitation processes for cleaning leafy products reduce pathogen levels by an amount that is inadequate to ensure microbiological safety (FDA, 2001; Sapers, 2005). The cause for this inadequacy is attributable to strong microbial attachment via biofilms. For example, E. coli O157:H7 was able to colonize and form biofilms on lettuce leaves submerged in water and incubated for one week at 4° C (Keskinen and Annous, 2008). To reduce the presence of biofilms on leafy products, more thorough washing and sanitation strategies are necessary to overcome the substantive cohesive properties of biofilms, which quorum sensing facilitates.

Interfering with Quorum Sensing
Quorum sensing plays a key role in the formation of biofilms in foodborne pathogens. It enhances access to nutrients and favorable environmental niches, and it produces a unified response that enables cell survival under hostile conditions (Asad and Opal, 2008). The communication signals in quorum sensing transcend barriers of disparate species and occur in both gram-negative and gram-positive bacteria. Essentially, this highly effective system of cell-to-cell communication allows bacteria to accomplish tasks that benefit every cell within the structure. It may also influence the virulence and antimicrobial resistance of biofilm communities. For this reason, perhaps the key to controlling biofilm formation on industrial, medical, food, and food processing surfaces is interfering with quorum sensing.

To reduce the pathogenicity of biofilms and retard the benefits of quorum sensing in general, various countermeasures such as enzymatic degradation of signaling molecules, hindering the generation of signals, and blocking the receipt of signals have been explored (Hentzer and Givskov, 2003; Kjelleberg et al., 2008). Also under investigation are novel compounds that inhibit quorum sensing (Kjelleberg et al., 2008). The tricky part of these solutions is that one inhibitory compound or method that exhibits effectiveness against one type of biofilm may end up being useless against another. Moreover, most of the compounds and methods identified as inhibitors of quorum sensing and biofilm formation (such as biocides and disinfectants) are conducive to clinical settings, not food processing. The Scientific Status Summary “Quorum Sensing in Biofilms: Why Bacteria Behave the Way They Do” delves more deeply into specific compounds and methods that have exhibited some effectiveness against biofilms in foodborne pathogens. However, it is obvious that the amount of research in this area is inadequate for identifying definitive strategies that impede quorum sensing and the formation of biofilms on food and food processing equipment.

The Bottom Line
A wide range of microorganisms are capable of forming biofilms, and as a result, biofilms exist in a variety of environments. Some biofilms play a beneficial role in nature by serving as nourishment for larger organisms in the food chain. However, those formed by human and foodborne pathogens pose a significant threat to food safety. Several recent outbreaks of foodborne illness can be attributed to biofilms. The ability of biofilm microbes to act collectively to make a microbial colony stronger and more resistant to conventional sanitation and food safety methods is daunting. In addition, a sophisticated network of cell-to-cell communication—quorum sensing—enhances biofilms’ access to nutrients and favorable environmental niches such as fresh fruits and vegetables. To reduce the risks that biofilms pose to the food industry, further research is needed not only to understand biofilm formation in pathogenic organisms but also to determine effective techniques for impeding quorum sensing and inactivating biofilms on foods.

Midelet, G. and Carpentier, B. 2004. Impact of cleaning and disinfection agents on biofilm structure and on microbial transfer to a solid model food. J. Appl. Microbiol. 97: 262-70.

Ukuku, D.O. and Sapers, G.M. 2001. Effect of sanitizer treatments on Salmonella Stanley attached to the surface of cantaloupe and cell transfer to fresh-cut tissues during cutting practices. J. Food Prot. 64: 1286-1291.