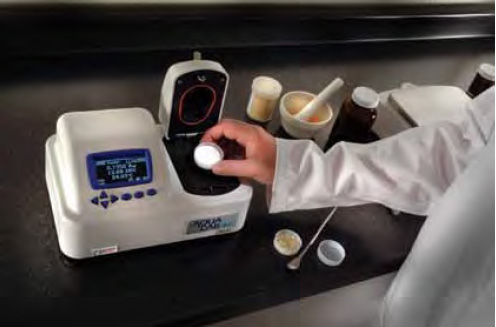 In his Processing column in the October 2009 issue of Food Technology , J. Peter Clark discussed the basics of water activity, so in this month’s Laboratory column I will not go into depth on the concept. Instead, I will focus on the methods and instruments available to measure moisture content and water activity of foods.

Moisture Content vs Water Activity
Moisture content is, simply, how much water is in a product. It influences the physical properties of a substance, including weight, density, viscosity, conductivity, and others. It is generally determined by weight loss upon drying.

Water activity, aW, is a measure of how much of that water is free, i.e., unbound, and thus available to microorganisms to use for growth. It is therefore important with regard to food safety. Microorganisms will not grow below a certain water activity level—aW 0.90 for most pathogenic bacteria, 0.70 for spoilage molds, and 0.60 for all microorganisms. While temperature, pH, oxygen availability, and several other factors can influence whether an organism will grow in a product and at what rate, water activity is often the most important factor. Water activity also plays a role with regard to chemical and physical properties.

Brady Carter ([email protected]), Applications Engineer, Decagon Devices Inc., Pullman, Wash., said that product stability has traditionally been determined by the “cook-and-look” method but we now have instruments that can measure water activity of a laboratory or pilot plant formulation and indicate whether the product will work prior to production. And once the product is in actual production, he added, we can use the measurement essentially as a form of process control—we can determine whether we need to dry the product more, cook it longer, control the belt speed or oven time, and so on. Moisture content is generally used as the end measurement in production, he said, but water activity gives tighter control and will find increased use at line, if not online.

Measuring Moisture Content
There are many methods for determination of moisture content. The primary methods used are loss on drying and Karl Fischer titration.

Whereas the loss-on-drying method will detect the loss of any volatile substance, the Karl Fischer method is specific for water.

Measuring Water Activity
We can’t insert a probe into a sample to directly measure its water activity. Instead, water activity is measured by placing the sample into a closed chamber and equilibrating the liquid-phase water in the sample with the vapor-phase water in the headspace and measuring the relative humidity of the headspace. Since water activity is the ratio of the water vapor pressure of the sample to the water vapor pressure of pure water under the same conditions, it is also equal to the equilibrium relative humidity, ERH (expressed in %), divided by 100.

Two types of instruments are used to measure water activity. Each type has advantages and disadvantages, Carter said, and the methods vary in accuracy, repeatability, speed of measurement, stability in calibration, linearity, and convenience of use.

Once an isotherm has been generated, it can be used to indirectly determine moisture content from a water activity measurement by developing an equation that describes the curve. After we have obtained the isotherm data, Carter said, we need to express the data in terms of an isotherm model that spans a large range of water activity values and isotherm shapes. The most commonly used models are the Guggenheim–Anderson–deBoer (GAB) model and the Brunauer, Emmett, and Teller (BET) model. Carter said that Decagon has developed another model, the Double Log Polynomial (DLP), that it considers superior to the others since it consistently provides a better fit to the data across the entire water activity range. The models are determined empirically using the data collected during isotherm generation, and the resulting equation can be used to calculate moisture content using water activity.

Some software programs, such as Decagon’s SorpTrac software, can model the isotherm and generate the equation coefficients automatically, Carter said, and most DVS instruments have software to also do data analysis.

Two Measurements in One Instrument
Since moisture content and water activity are currently measured using separate techniques or instruments, conducting both analyses in one instrument would save time and labor, Carter said. That was the idea behind Decagon’s introduction in February 2009 of its AquaLab Series 4TE Duo.

Since the moisture sorption isotherm is complex and unique to each product type, it must be determined experimentally by measuring water content at several water activity values. Decagon offers a separate instrument, the AquaSorp, that can rapidly generate isotherms, which can subsequently be loaded into the AquaLab Duo.

Advances and Challenges
Carter said that there really haven’t been any major advances in water activity determination other than using it to predict moisture content automatically. There have been advances in instruments to measure water activity, he said, but the methods are the same.

With regard to moisture content determination, Shelly Schmidt ([email protected]), Professor of Food Chemistry at the University of Illinois-Urbana, said that Karl Fisher titration is still the best method overall for determining the moisture content of intermediate-moisture and low-moisture foods, but it takes a lot of effort and time. It takes 5–10 min to conduct if it’s set up for routine, regular use, such as in a quality assurance setting, she said, but if it’s not for routine use, it can take a good deal of time to set up, since for each formulation the user must decide which solvent system works best.

Schmidt said that there have been advances in the development of rapid methods and instrumentation for measuring both moisture content and moisture sorption isotherms. They are not necessarily brand new, she said, but they are now faster and more reliable. Halogen drying, for example, has an advantage over other forms of infrared heating, she said, allowing the temperature to climb faster and thus shorten the analysis time.

Several companies make automated isotherm generators, Schmidt said, but they are relatively expensive. They have done well in reducing the time to generate isotherms and allow the user to obtain other sorption-related information, such as kinetic data, amorphous content, and heat of sorption, but they require more care than saturated salt solutions. Another advantage is that the user can obtain isotherms over a wide temperature range, whereas before a user needed to buy an incubator for temperature control.

Among other advances, Schmidt added, is the ability to watch a sample in the sample chamber as it absorbs water.

The DVS Advantage System from Surface Measurement System, for example, offers both a video microscope and a Raman port (for insertion of a Raman spectroscopy probe), so one can observe and capture visual and structural information from the sample during the sorption experiment.

Another challenge, Carter said, is how to get a true water activity value if the product has volatiles other than water, such as propylene glycol or ethanol. All current instruments are affected by volatiles in one way or another. An additional challenge is to develop a way to measure water activity online. We can measure water activity at line but not online, with the exception of some near-infrared systems, he said, but the challenge is to get repeatable results. With production lines, the material is in constant motion. Some dryer and extruder manufacturers have systems that do measure moisture content online, but it would be preferable to measure water activity. However, measurement of water activity is an equilibrium test, so it is impossible to do it on something on a moving belt because it’s not in equilibrium. Decagon continues to investigate new technologies to address these challenges, Carter said.

There are many methods for determination of moisture content. The primary methods used are loss on drying and Karl Fischer titration.

Conference to Address Water in Food
The EuroFoodWater Association is soliciting abstracts for papers to be presented at its EuroFoodWater Conference on Water in Food, to be held in Reims, France, on arch 21–23, 2010. This will be the sixth annual conference for engineers and scientists working in the fields of water determination, water activity, and water interactions in food. Previous conferences were held in Italy, France, Switzerland, Belgium, and Germany.

The conference will feature three sessions: “Water Structure and Interactions in Food,” “Water Determination and Food Quality,” and “Water Activity and Food Stability.” Deadline for abstracts is January 15, 2010. For more information, visit www.efw2010.eurofoodwater.eu or contact Barbara Rogé at [email protected] or M. Mathlouthi at [email protected].

Water Activity Software Aids in Formulation
Adria Developpement (www.adria.tm.fr) has created a computer program that calculates water activity as a function of the composition of a product.

The software includes mathematical models for calculating the water activity of any formulation on the basis of the hygroscopic properties of the liquid and solid phases that constitute the food. The calculations are based on published models—Guggenheim–Anderson–de Boer (GAB) and Ferro–Fontan for the solid phase and Teng and Roa for the liquid phase.

The software can be used in conjunction with Adria’s

Sym’Previus software (www.symprevius.org) to predict which spoilage and pathogenic microorganisms will grow in a particular formulation.

by Neil H. Mermelstein
a Fellow of IFT, is Editor Emeritus of Food Technology
[email protected]