Chocolate appears in many forms and as an ingredient in many confectionery and non-confectionary products. The December 2010 issue of Food Technology contains an overview of the chocolate confectionery market. This article focuses on the production and quality testing of chocolate. 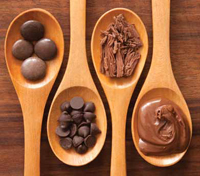 Workers harvest the pods by hand, hack open the shells, scoop out the pulp and seeds, and discard the husks. The pulp and seeds are placed into boxes or piles, covered with banana leaves, and left to ferment for up to 9 days, during which flavor and aroma compounds are formed. The seeds are then dried in the sun or in dryers for about a week, packed into burlap bags, and shipped to manufacturing plants. There they are mechanically cleaned to remove dried pulp and debris, sorted, and roasted to release the flavor and aroma compounds. The roasting also deepens the brown color of the beans.

The beans are then lightly crushed, and the husks are blown away in a process called winnowing, leaving dark chips called nibs whose cells contain about 53% fat (cocoa butter) and 47% solids. The nibs are then crushed or ground in mills that generate enough friction and heat to liquefy the nibs into a thick paste called chocolate liquor. Some of the chocolate liquor is placed in a hydraulic press that squeezes out the cocoa butter, and the remaining solid cocoa is pulverized into cocoa powder.

The chocolate liquor can also be poured into molds to harden into unsweetened chocolate, which contains 100% chocolate liquor. To produce dark, semisweet, and bittersweet chocolates, nibs are ground with sugar to reduce the particle size. The resulting paste is then kneaded in a process called conching to further smooth the texture. Aerating during conching creates a well-rounded flavor. The conched chocolate is then tempered by repeatedly cooling and heating it to provide a glossy sheen and ensure that the chocolate will melt properly. The tempered chocolate can be molded or poured over flavored centers (enrobing) or used as a filling in other confections.

Quality Testing
Penn State University has a Cocoa, Chocolate, and Confectionery Research Group, which conducts pertinent collaborative research on cocoa, chocolate, and confectionery science and technology and presents seminars and short courses. Gregory Ziegler, Professor of Food Science at Penn State, who specializes in research on the influence of processing on chocolate quality, said that quality tests are conducted on chocolate at various stages of manufacture.

To determine whether beans have been properly fermented, inspectors conduct a cut test. A number of fermented beans are cut in half and the fraction that is off color is noted. The color of the beans changes during fermentation; properly fermented beans are brown while purple and slate-colored beans are considered defects. A small sample of beans may also be cleaned and roasted to make chocolate liquor, which is then taste-tested. If the taste is off, the roasting conditions can be adjusted. The beans might also be checked for moisture content by Karl Fischer titration or by infrared or microwave methods.

Other important quality tests include determination of fat content in seeds, nibs, and liquor. The fat content in seeds needs to be known to be able to formulate products correctly, Ziegler said, and knowledge of the moisture content is needed to make sure the beans were roasted correctly. Among the standard quality tests for chocolate liquor and finished chocolate are moisture content, again generally by Karl Fischer titration. Solid fat content may also be conducted since it is a determinant of cocoa butter hardness, a formulation consideration.

There is also interest in determining the free fatty acid content of beans and liquor, Ziegler said, since there have been concerns about the quality of beans from West Africa. The free fatty acid content is generally determined by wet chemistry techniques at this point, he added, but it would be interesting to have faster analytical techniques such as chromatographic methods. Flavor is important, and there is no substitute for sensory evaluation panels, Ziegler said, adding that the electronic nose—such as that manufactured by Alpha-MOS (www.alpha-mos.com) —has been shown to be of use in evaluating chocolate aroma but may not be being used routinely.

For chocolate liquor and finished chocolate, the particle size and distribution are important because they are related to viscosity and yield value. For chocolate liquor, how much free fat is liberated from seed cells is related to cost. In the final product, the particle size is related to viscosity and yield value in the molten state. For the finished product, temper is important. This is determined by a temper meter, which uses thermal analysis to determine whether the chocolate has achieved the proper cocoa butter crystals. Among the available temper meters are the Model 530 Chocolate Temper Meter from Tricor Systems Inc. (www.tricor-systems.com) and the MultiTherm TC™ combined cocoa butter measuring system and temper meter from Buhler (www.buhlergroup.com). The latter provides a cooling curve, from which the analyst can tell what form of crystallization has occurred and whether the sample has been properly tempered. Gloss is also important and is determined using a gloss meter.

Blommer Chocolate Co. (www.blommer.com) is the largest roaster of cocoa beans in North America. The company sells bulk chocolate, chocolate liquor, cocoa butter, and cocoa powder as well as all kinds of chocolate products: milk chocolate, semisweet chocolate, high-cocoa-mass chocolate, chocolate chips, confectionery coatings, color coatings, panned products, and products marketed as organic, sugar-free, kosher, kosher pareve, kosher for Passover, traceable, Fair Trade, and Rainforest Alliance. Marlene Stauffer, Director of Quality and Regulatory, said that licensed graders at the port of entry cut open a sample of beans to inspect the nibs for evidence of mold and infestation and to determine by color whether the beans have been properly fermented.

The temper of the final chocolate is important, Stauffer said, as manufacturers want the product to be tempered properly, have a good snap when broken, and look smooth without a lot of aeration or honeycombing. The company uses experienced operators, temper meters, and visual inspection to determine whether this has been accomplished.

Roasting is the kill step in cocoa bean processing, she said, killing pathogens (particularly Salmonella), and microbiological testing is conducted on the final chocolate. Flavor testing is absolutely critical in roasting and helps determine the degree of roast, Stauffer said. Every operator is trained in sensory testing, and they look for off-notes right after roasting and after chocolate liquor grinding. Sensory panels check all final chocolate products.

Another final test of deposited products is determining the count per pound. Chocolate chips for baking are typically sized for grocery store sales as 1,000 count per pound, but the company also provides counts of 2,000, 4,000, and 10,000, depending on what its customers in the baking, confectionery, dairy, and functional foods industries want.

Challenges Ahead & Research Needed
Stauffer said that she would like to see rapid methods for determining fat and moisture content and automatic titrations to determine fat quality. Current instruments require extensive calibration to maintain, she said, so it would be great to have rapid methods for fat and moisture determinations as well as rapid microbiological methods. Testing for yeast and mold takes five days, but the product needs to be out the door faster, she said. Blommer outsources microbiological and chemical testing to independent laboratories. Most labs provide a 10-day turnaround for chemical testing, but two days is preferable. Sugar testing can take up to eight days. The alternative is to have testing equipment in house and have technicians do the testing, she added, but that’s an additional expense.

Stauffer pointed out that there is a need for standardization of methods for testing chocolate. Temper, she said, is always difficult to measure quickly and constantly, viscosity measurements vary among technicians and plants, and the equipment can be difficult to calibrate. Particle-size measuring systems can also show variation. The main issue, she said, is that there is not always a standard method for the chocolate industry to follow. Companies around the world have their own ways of measuring and their own types of equipment. As a result, Blommer uses four different fat analyzers.

Ziegler said that finding a way to visualize the fat crystal network in chocolate, including the size and distribution, could provide more information about bloom stability—resistance to oil and moisture migration—and lead to a way to predict bloom in chocolate and chocolate-filled confections. He said that Penn State researchers are studying chocolate structure and its effect on sensory quality. There is also a correlation between mouthfeel and flavor, and changing the viscosity has dramatic effects on mouthfeel. Besides particle size, there is also interest in studying the shape of all the particles in chocolate, not only the cocoa but also the sugar and milk solids, he said. If products with the same particle size don’t behave quite the same, some other factor must be involved.

Organizations Related to Chocolate
National Confectioners Association (www.candyusa.com). Founded in 1884, NCA is a trade association of confectionery companies. Its Chocolate Council was founded in 2008 by member companies that process cocoa and make chocolate. It focuses on educating the public about chocolate. NCA’s Sweets & Snacks Expo will be held May 8–10, 2012, in Chicago, Ill.

American Association of Candy Technologists (www.aactcandy.org). AACT is a professional organization of individual technologists, operations personnel, educators, students, business staff, and others dedicated to the advancement of the confectionery industry. AACT’s 2012 National AACT Technical Seminar will be held October 1–3, 2012, in Lincolnshire, Ill.

PMCA (www.pmca.com). Founded in 1907 as the Pennsylvania Manufacturing Confectioners’ Association, PMCA is a trade association of confectionery manufacturers and companies in related industries. Its 66th Annual Production Conference will be held April 30–May 2, 2012, in Hershey, Pa. PMCA’s Research Committee directs basic and applied research in the science of chocolate and confectionery at several universities. PMCA also presents short courses in confectionery technology.

World Cocoa Foundation (www.worldcocoafoundation.org). WCF is an organization of manufacturers, processors, supply chain managers, ports, and allied industries and trade associations that works to promote sustainable cocoa production and improve the well-being of cocoa farmers through economic and social development and environmental stewardship.