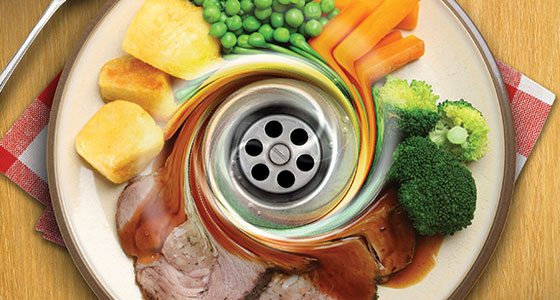 Food waste, which is estimated at 30% to 40% of the annual food supply in the United States, has far-reaching social, economic, and environmental ramifications (NRDC, 2012). It also adds up to big money and big incentives to food technologists to develop new approaches and products for reducing, recovering, and recycling food waste. A closer look at food waste in the United States reveals where opportunities might lie.

Estimates of food waste in the United States are based on estimates from the U.S. Dept. of Agriculture (USDA) of food loss at retail and consumer levels of 31%, which corresponded to approximately 133 billion pounds of uneaten food in 2010 (Buzby et al., 2014). The USDA defines food loss as the edible amount of food, postharvest, that is available for human consumption but is not consumed for any reason. It includes cooking loss and natural shrinkage (for example, moisture loss); loss from mold, pests, and inadequate climate control; food discarded by retailers due to color or appearance; and plate waste by consumers.

The amount of food waste in the United States has far-reaching ramifications. Families in need are impacted when wholesome food is discarded instead of donated to food pantries. The environment is impacted by excess production and resource use extending from the farm through waste disposal. The long-term health of the planet is compromised by the methane generated by food rotting in landfills. In the United States, data from the Environmental Protection Agency (EPA) show that in 2010, after accounting for recycling of paper and other materials, food was the single largest component of municipal solid waste going to landfills (21%) (EPA, 2012). EPA also estimates that landfills are the third-largest source of human-related methane emissions in the United States (EPA, 2011).

An Economic Opportunity
The social, environmental, and economic magnitude of food waste is helping to stimulate private and public research on innovative new approaches for reducing it. Entrepreneurs across the United States are stepping up to take on the challenge. The economic stakes are large. The USDA estimates that the cost of food loss at retail and consumer levels was $161.6 billion in 2010, based on prices consumers would have paid, on average, for the food if bought at retail (Buzby et al., 2014).

This $161.6 billion is also the potential market for innovative waste-reduction technologies and systems at the retail and consumer level. All things being equal, retailers and consumers would be willing to pay up to $161.6 billion to avoid the loss of $161.6 billion worth of food. A consumer, for example, would be better off paying $2 for a product that prolonged the freshness of refrigerated produce instead of having to replace a bag of limp carrots for $2.01 (not to mention the time and transportation costs of going to the store).

Waste at other levels of the food supply chain, for which the USDA does not have estimates, provides additional incentives and market opportunities. Farmers, processors, manufacturers, and distributors all represent potential markets for innovative technologies and systems for reducing food waste in their operations.

Food recovery organizations, such as food banks and pantries, provide another market opportunity for innovators. Innovations that could help food banks tap into the large amounts of wholesome food that is wasted would be worth the amount of money food banks could save by not having to purchase foods. Tax benefits sweeten the incentives to retailers to donate food (for example, Internal Revenue Code 170(e)(3)) and in some cases, defray the costs of food recovery. These incentives are bolstered by the 1996 Federal Bill Emerson Good Samaritan Act that protects food donors who have acted in good faith from civil and criminal liability in case of foodborne illness.

Other market incentives are found in the cost of landfilling food waste. According to the EPA, food waste cost roughly $1.3 billion to landfill in 2010 (Schwab, 2013). Reductions in food waste could reduce these disposal costs, along with the cost of purchasing the food in the first place. Recycling food waste by feeding it to animals or diverting it to energy generation or composting could also reduce disposal costs and possibly generate additional revenues. These benefits provide further market opportunities for innovators.

Food waste does not, however, always represent an economic opportunity. In some cases, technical and economic constraints make food waste the most efficient and least-cost option for businesses and societies. In some cases, food waste may also represent the least-cost option for the environment. For instance, a low-efficiency refrigeration system for a secondary apple harvest or a nonrecyclable polystyrene container for scant leftovers from a restaurant may be more costly for the environment than the wasted food.

Targeting Innovation
Across the country, innovators are developing new approaches for efficiently and effectively meeting the challenge of food waste. Such innovation could be targeted in a number of ways. It could be targeted according to amount or value of the food waste. When the 133 billion pounds of food loss at the retail and consumer levels in 2010 is broken down by food group, the top three food groups in terms of loss are as follows: 1) dairy products, 2) vegetables, and 3) grain products (Figure 1). 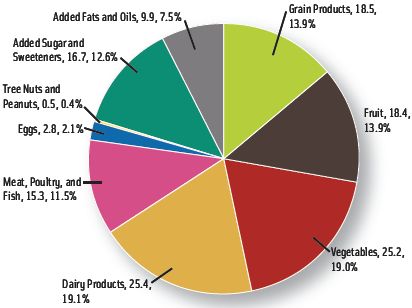 The top three food groups in terms of share of total value of food loss, estimated at retail prices, are 1) meat, poultry, and fish; 2) vegetables; and 3) dairy products (Figure 2).

Innovation can also target waste at different points along the supply chain. As shown in Table 1, USDA estimates that loss at the consumer level is greater than that at the retail level for all commodity groups. Only the percentage loss for fats and oils is similar at the retail and consumer levels. Perishability and the logistics of food production and distribution are two of the key drivers of waste along the supply chain, though the specific causes vary at each stage of the chain. See sidebar at the end of this article.

Innovation can also target three primary objectives: reduce food waste before it occurs; recover wholesome excess food to feed people; or recycle food waste for animal feed, composting, energy generation, or other purposes. Both USDA and EPA recommend a hierarchy of objectives with reduction at the top, followed by recovery, and then recycling. Here is a look at the types of innovations targeting each objective. 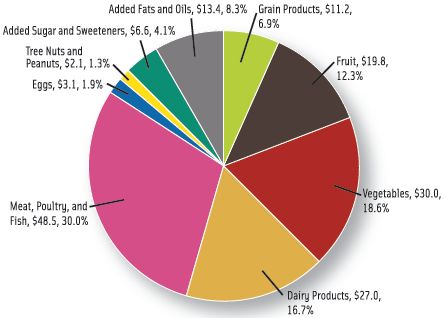 • Reduce: Innovations that reduce the creation of food waste. Innovations to reduce food waste include those to prolong the storage life of food, improve processing and distribution efficiencies, and create new products from agricultural and processing culls. Examples of innovations extending product quality and storage life include nanoclays used in beer bottles, nanosilver used in food storage containers and refrigerator compartments, and fruit- and vegetable-based products to inhibit spoilage of fresh-cut produce.

Technologies to improve processing and distribution efficiencies include applications on the farm, such as an automated in-orchard apple sorting technology developed by scientists at USDA’s Agricultural Research Service (ARS). This technology enables apple growers to remove inferior fruit in the orchard and better manage the harvested fruit, thus avoiding potential devastating product loss during postharvest storage and handling.

Many innovations have direct application in developing economies. ARS scientists, for example, developed a small-scale peanut dryer and sheller suitable for use in remote areas of Haiti, where as much as 50% of the peanut crop is lost due to poor moisture control. Examples of interesting, innovative new food-based products range from a healthful grape-seed flour byproduct of wine making to new products from sub-graded products such as giant yams and carrots. 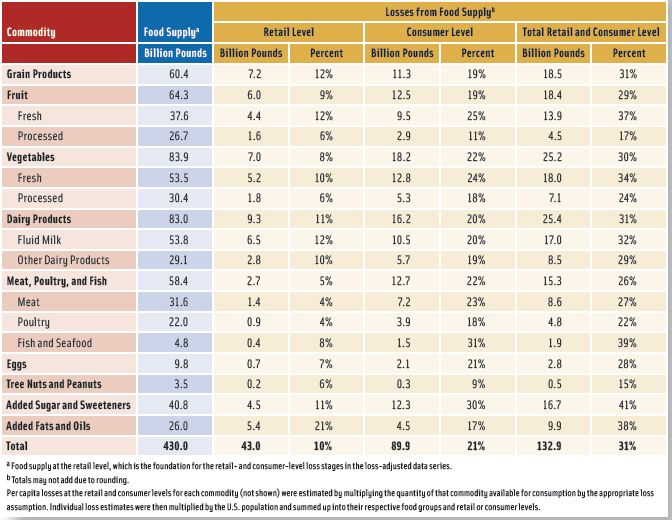 • Recover: Innovations that recover wholesome surplus food to feed people. Innovations to recover wholesome food for donation include connection technologies, tools for measuring the value of food donations and tax benefits, and new types of food stores and outlets. Some of the most interesting innovations involve connection technologies that help to more efficiently connect those with excess wholesome food with those who need it. Examples of innovators using these technologies include those at CropMobsterTM, who developed a web-based service that helps small-scale producers inform thousands of people almost instantaneously about surplus food, gleaning events, discount sales, and freebies; those at Zero Percent, who developed an app to alert charities about food suitable for recovery and available for quick pick-up; and those at Food Cowboy, who developed an app to help truckers locate route-specific donation locations for undeliverable but wholesome food.

• Recycle: Innovations that recycle food waste to keep it out of landfills. Innovations for recycling food waste include those to connect food waste generators with recyclers, who create animal feed, compost, and energy generation from it. Turning food waste into animal feed is standard operating procedure for many processors. This practice has recently become more widespread, with restaurants, hotels, schools, nursing homes, grocery stores, large food processors, and even a global hospitality provider in Las Vegas sending their food waste to feed livestock (EPA, 2014). Innovation in composting is helping to create higher-value products. USDA scientists, for example, have developed anaerobic digestion processes for coffee grounds and potato-processing waste (mostly peels) to produce a substitute for peat moss, an imported nonrenewable matrix for potting and garden soils.

Innovative systems and technologies for energy generation from food waste are also growing. Examples include a commercial digester used by a company that converts food waste sludge to bio-gas for electricity, thus lowering waste disposal costs 25% and saving $100,000/year, and a closed-loop food waste system that burns 13 billion olive pits/year to evaporate a significant amount of spent processing water and create steam power.

The views expressed in this article are those of the authors and cannot be attributed to the Economic Research Service, the Office of the Chief Economist, or the U.S. Dept. of Agriculture. 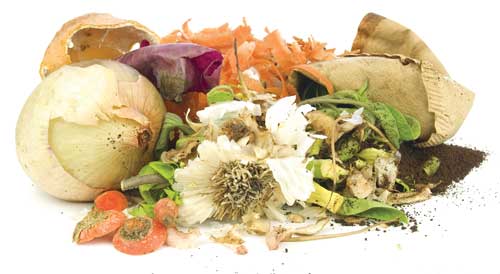 Causes of Food Loss and Waste Along the Supply Chain

Farm Level
• Damage by insects, rodents, birds, microbes,a or weather
• Harvesting costs are greater than the value of the harvested product
• Overproduction due to difficulty predicting yield or sales

Farm-to-Retail Level
• Industry or government food safety regulations or standards may cause some products to be rejected for human consumption (e.g., livestock condemned at slaughter for food safety reasons)
• Technical or other constraints reduce value-added transformation of byproducts from food processing
• Rejection of blemished, misshapen, or wrong-sized foods due to minimum quality standards by buyers, which are the result of consumer demand for high-quality, cosmetically appealing, and convenient foods
• Spillage and damage, such as by equipment malfunction (e.g., faulty cold or cool storage) or inefficiencies during harvesting, drying, milling, transporting, or processing

Consumer Level
• Spillages, abrasion, bruising, excessive trimming, excessive or insufficient heat, inadequate storage, technical malfunctiona
• Sprouting of grains and tubers, biological aging in fruita
• Confusion over “use-by” and “best before” dates so that food is discarded while still safe to eat b
• Lack of knowledge about preparation and appropriate portion sizes (e.g., unfamiliarity with papaya leads to high papaya wastec)
• Psychological tastes, attitudes, and preferences lead to rejection of wholesome fooda
• Over purchase or preparation for special events and holidays or of seasonal bounty (e.g., more food is wasted in summerd)

NRDC. 2012. Wasted: How America is losing up to 40 percent of its food from farm to fork to landfill. Natural Resources Defense Council Issue Paper, IP:12-06-B.