This month’s column will continue the theme of “How Is It Processed?” The food to be discussed this month is hummus. Hummus is known for its healthfulness. This column will provide a brief overview of the history of hummus and the current market. It will also unveil hummus processing techniques. 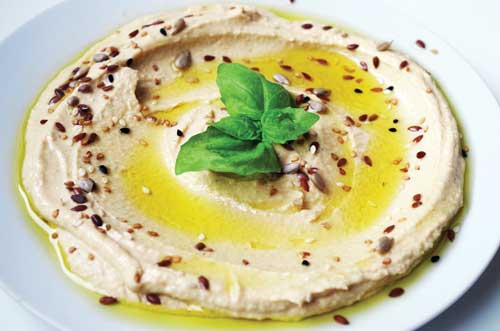 History, Market, and Nutrition
Hummus is a thick dip or spread made from cooked, mashed chickpeas, blended with tahini (sesame seed paste), and typically seasoned with olive or sesame oil, lemon juice, salt, and garlic. Hummus is thought to have originated in Cairo in the 13th century. Hummus has long been a staple in Middle Eastern cuisine. Beginning in the 1980s, commercial brands of hummus began to emerge in the U.S. market. Recently it has become popular in the United States, and currently approximately 26% of American households buy hummus. At the same time, surprisingly, more than 80 million people, a quarter of the U.S. population, still don’t know what hummus is. Sales of hummus are on the rise. In 2012 sales were estimated at $530 million in U.S. food retailers, up 11% from a year earlier, and a 25% increase over 2010, according to market research firm Information Resources Inc.

Growing demand for hummus has increased the price for chickpeas, spurring farmers to increase production in the United States in recent years. The rising popularity of hummus across the nation has been good for farmers, some of whom have been increasing the amount of chickpeas they grow for hummus production. During the past decade, acreage devoted to chickpeas has exploded in Washington and Idaho. Two-thirds of the nation’s supply is grown in Washington and Idaho, due in part to the fact that chickpeas require little water. Chickpeas are also grown in California, Montana, North Dakota, and other states. Historically, about 70% of the chickpea crop was exported each year, but that has changed because of the rising domestic demand for hummus.

Chickpeas, also known as garbanzo beans, are the main ingredient in traditional hummus. Chickpeas are high in dietary fiber, protein, B vitamins, manganese, and other nutrients. Although the exact composition of hummus varies depending on the manufacturer, it is generally low in fat and high in protein and fiber and is considered a healthy food. Hummus is cholesterol-free and has no trans fats.

Hummus Processing
The following is a step-by-step look at hummus processing.

After cleaning, the chickpeas are soaked in large stainless steel tanks for from 10 hours to 14 hours. Chickpeas have translucent skins. The tanks frequently contain sodium bicarbonate (baking soda) to assist in loosening their skins. The skins increase graininess in the hummus and can dampen flavor as well as adversely affect texture. During soaking, the chickpeas soften and expand to two times their volume. Following soaking, some manufacturers remove the skins from the chickpeas. This can be done mechanically or by hand.

• Cooking. Next the soaked chickpeas are cooked. In one method, chickpeas are pumped into trays that are moved on carts into the cooker. They are then cooked at 124°C for 30 min. In other methods, the soaked chickpeas are boiled in water with or without sodium bicarbonate (baking soda) to speed up the cooking process. Soaked chickpeas are cooked in stainless steel vats for three hours in boiling water. This vat cooking process is sometimes used to remove skins from chickpeas with processors removing the hulls that float to the top of the tank before cooling. This process is used by manufacturers who are less concerned with the final texture being smooth, because in this case, some of the skins remain on the chickpeas that are transferred to the grinding process.

• Grinding. The next step is grinding of the chickpeas. There are many types of commercial grinders, some of which have two blades, one of which is stationary and another that revolves while forcing the ground chickpea paste through the mesh. This grinding process is critical to the final consistency of the hummus. 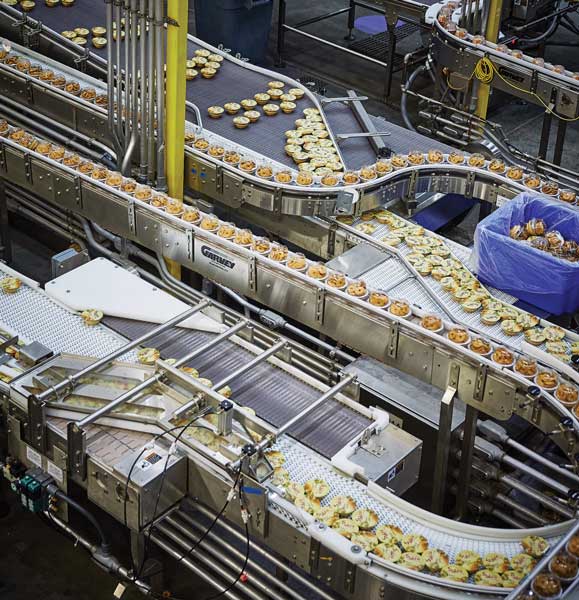 • Processing of Tahini. Tahini is an essential ingredient in hummus. It is a paste made from finely ground toasted sesame seeds. It has a consistency similar to peanut butter. Hulled or unhulled sesame seeds may be used to make tahini. Tahini made with unhulled seeds is darker in color and more bitter; however, it also contains more vitamins and has higher nutritional value. Tahini made with roasted sesame seeds is darker and has deeper flavor that that made from raw sesame seeds. In many cases, both hulled and unhulled seeds are combined into a mixture as the tahini is processed. Tahini is rich in many vitamins, including calcium, copper, manganese, and the amino acid methionine. Tahini is also a good source of omega-3 and omega-6 fatty acids.

During commercial production of tahini, sesame seeds are first soaked in water. Soak times of up to one day are typical. The seeds are then crushed to separate the bran from the kernels. The crushed seeds can then be soaked in salt water, causing the bran to sink and enabling separation of seeds from skins. The floating kernels are then skimmed off the surface of the water. Next the seeds are frequently, although not always, roasted at 350°F (176.7°C) for 10–15 min. Tahini can be made from raw seeds. Lastly the seeds are ground to produce an oily paste. Because of tahini’s high oil content, many manufacturers refrigerate the product to prevent spoilage and ensure safety.

• Mixing. The next step in processing hummus is mixing all of the ingredients together. The smooth chickpea paste is blended with tahini, garlic, salt, lemon, cumin, red pepper, and other flavors and spices. Chickpea soaking water may be added back in this step as well. Olive or sesame oil may also be added. Israeli hummus is between 25% to 50% tahini by weight with a dash of cumin. This makes Israeli hummus richer and deeper in color. Greek hummus is heavy in garlic and lemon.

• Pasteurizing and Packaging. Hummus is often pasteurized prior to packaging. Pack Line East, New York, N.Y., is one of the industry leaders in hummus packaging machinery. The company offers a variety of filling and sealing machines that can handle up to 500 hummus units per minute. Hummus machine fillers are typically equipped with clean-in-place cleaning systems.

Recent Innovations
Recent research has focused on development of new flavors, increased nutrition, and longer-lasting hummus products. Development of hummus containing roasted red bell peppers and sun-dried tomatoes has added new flavors. Spicy versions of hummus are also emerging as alternatives to salsas. Alternate types of tahini using raw or sprouted sesame seeds offer additional complexities to hummus flavors. In addition, although technically not hummus, some food manufacturers have begun selling “no chickpea” hummus, such as edamame hummus, white bean hummus, and spicy yellow lentil hummus. Continued market growth for hummus is a certainty due to the nutritional value and popularity of this ancient, yet delicious food.