This month’s column will explore the use of robotics in food processing. Robots offer a wide range of opportunities to improve food processing operations; however, as with all new technologies, their implementation must be well thought out in order to avoid potential risks. In this column, current usage of robotics in the food industry will be reviewed and benefits and risks will be considered.

History and Market
Robot comes from the Czechoslovakian word “robota” and means forced labor. The International Standards Organization defines robots as automatically controlled, reprogrammable, multipurpose, manipulative machines with several degrees of freedom, which may be either fixed in place or mobile for use in industrial automation applications. More broadly, robots are machines that serve functions in place of living agents.

For many of us, our first exposure to robots in food processing was during childhood watching the then futuristic cartoon The Jetsons. Today the use of robotics in food processing is common. According to the International Federation of Robots, 240,000 units were sold worldwide in 2015. This represented an 8% increase in annual growth globally. Growth is highest in Brazil where sales are increasing by 33% annually. Early uses of robots in food processing were primarily for packaging and palletizing operations. Robotics is currently used in approximately 40% of palletizing operations and 26% of food and beverage packaging lines. In 1998, flex picker robots were introduced, revolutionizing the food industry by enabling rapid picking and placing of food items. Robots are now being used in many food processing operations from farm to fork. Food industry manufacturers have reported a 25% increase in productivity since employing robotics when compared to the work done by humans.

Visionaries like Elon Musk have shared grave warnings regarding the risks of artificial intelligence and robots changing the global workforce in ways that take jobs from humans. He has advised that increased government regulation is needed to oversee implementation of the technology. Mark Zuckerberg disagrees, stating that he believes the future of artificial intelligence and robotics is “limited.” Regardless of one’s vision, robotics is playing an increasing role in the food industry. One of the reasons for this is the improved sanitary designs offered by modern robotics. Since the implementation of the U.S. Food and Drug Administration’s Food Safety Modernization Act in 2011, increased focus has been placed on preventing contamination in the food supply, and robotics can help meet those and many other needs.

Robotic System Components
Manufacturing robots are complex systems comprised of multiple components from different vendors. One of the components is usually an arm, perhaps a multi-jointed robot arm, or an overhead picking arm called a “delta” or “parallel” robot. Delta robots are commonly found in food processing operations, and an example can be seen in the photo on page 75, where it is uniformly spreading pizza sauce on the crust.

Separately, there is an end-effector, often customized for a specific food application. End-effectors include a wide variety of shaped grippers, suction cups, and other manipulation devices specific to the size, shape, and rigidity of the food products they are handling. In addition, either colocated with the robot, or further up the line, is a computer vision system used to determine orientation of the food to be manipulated. In packaging processes, the vision system may be required to read bar codes as well. Safety systems are also typically incorporated in the robotics.

Many systems detect if humans or objects come in proximity to moving parts on the robot and/or the automated conveyance technology serving it. Robotics also require special food-safe materials. Stainless steel is commonly used since it can withstand caustic cleaning chemicals. In addition, food-safe lubricants must be used on moving parts. Finally, some manufacturers have created specialized “gloves” for the robot, to enable extreme sanitization processes. These are similar to rubber gloves for humans, covering all likely contact surfaces. After use they can be removed and disposed of. Finally, robots must be computer controlled and have an electronic control system with or without artificial intelligence capabilities.

Commercial Applications
A few of the main areas of commercial application of robotics in the food and beverage industry will be reviewed in this section.

• Packaging and Palletizing. The two most common applications for food-handling robots currently are packaging and palletizing. Food robots are used in primary packaging, the stage of the line during which food is packed into its wrapper, container, or vacuum-sealed bag. Secondary packaging is another common application for robots. Palletizing represents an additional large market for robotics in food and beverage processing.

New classes of robotics systems with improved capabilities to manipulate less rigid objects with greater variability in size, shape, and orientation are expanding adoption of robotics in these two areas. The photograph on page 77 shows a combination of two technologies, machine vision and robotics to improve cheese packaging line automation and reliability. The vision-guided system identifies and locates the centers of the individually packaged products. Each robot utilizes this information along with the conveyor encoder to line-track and pick products in motion.

• Meat Processing. Meat processing involves many operations for which humans are not optimally suited. As a result, the use of robotics in meat processing is growing, including cutting, sorting, and packaging. Working in freezers and refrigerated cold boxes is not conducive to human comfort, but robots can work under those conditions without interruption. In addition, cutting and trimming carcasses is very dangerous work for humans, but robots can work precisely and repeatedly without risk. Humans also can potentially taint foods with pathogens and/or bacteria from illnesses, whereas robots can be highly sanitized and do not become ill. Modern meat processing robots can automatically eviscerate 360 carcasses per hour. They are also used for processing sausages and deboning and cutting chickens. Ham and shoulder deboning robots use X-ray detection to automatically determine the left or right side of the ham or shoulder and also measure the length of the bones to locate the joints and ensure a better yield. The system doesn’t cut the meat off the bone but rather debones by dismantling. This spares the meat from knife damage, improving final product quality.

• Dairy Processing. Automatic milking systems are one example of robotics in dairy processing. These were developed in Europe in the early 1990s and introduced in the United States in 2000. Robotic milking is voluntary, allowing the cows to set their own milking schedules. These robotic systems have numerous advantages, including economic benefits, increased milking frequency, management benefits, and cow health and welfare benefits. Robots are also used in cheese processing for stirring curds, slicing cheese, and packaging. Robots can portion up to 12,000 cheese portions per hour. 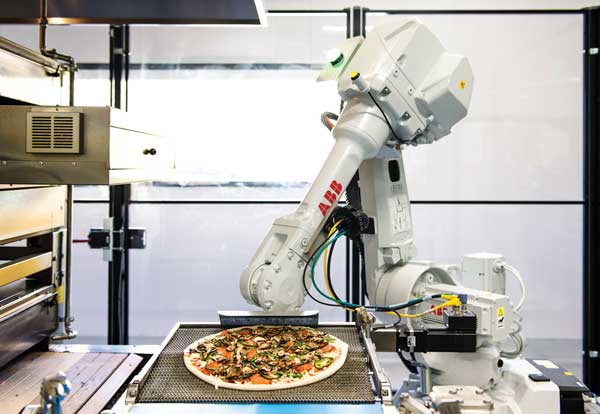 Foodservice Applications
Robots are also moving into the foodservice industry. Robots can perform a variety of kitchen tasks—from mixing to chopping. There is a restaurant in China that uses more than a dozen robots to cook and deliver food to customers. Robots greet customers, deliver dishes to the table, and cook the food. Each robot can understand 40 everyday sentences and costs about $6,500. Cocktail-making robots have also been developed, functioning as robotic bartenders. Sushi, pancake, and noodle making robots are also being used in Japan and China. Zume Pizza, a restaurant in Mountain View, Calif., is making pizza using robotics.

Food Delivery
Another promising area for robotics in food processing is food delivery. Starship Technologies launched a robotic delivery service in Washington, D.C., where automatons pick up orders from restaurants and deliver them to consumers. The robots can carry up to 20 pounds and go four miles an hour on the sidewalk. They are operated remotely. Each robot is equipped with alarms that go off if anyone tries to pick it up and cameras to record these activities. In addition, the lid can only be unlocked by the consumer through an app or code. Marble is a company in San Francisco that is deploying robots for food delivery. Dispatch is yet another company exploring this space.

Future Developments
In the next 20 years many activities that humans perform while processing, packaging, and delivering foods will become fully automated. Robotics will be used in areas where it makes sense technically and economically. Complex tasks will be automated and collaborative robots will work side by side with humans. Robots will be smarter and will communicate with each other more effectively. Robots will likely become as omnipresent in the food industry and in our lives as computers and cell phones have become in recent years.