Although restaurant industry sales reached an all-time high of $799 billion in 2017, up 1.7% when adjusted for inflation, and captured 48% of America’s food dollars, it’s been another tough year for the foodservice industry and anything but business as usual (NRA 2017a).

Although foodservice spending rose 2% for the year ended May 2018, growth was primarily due to the rising cost of a restaurant meal, according to NPD/CREST; total foodservice visits were flat (NPD 2018b).

Fast casual was the only restaurant sector to increase traffic, up 5% for the year ended May 2018, although growth was at a lower rate than in previous years (NPD 2018c).

Consumers are not dining out more often, but they’re increasingly turning to foodservice for help with in-home meal preparation. Nearly half of dinners purchased at a restaurant were eaten at home in 2017; one in five at-home dinners used at least one foodservice item (NPD 2018b).

Only 37% of restaurant visitors ate their meal in the restaurant last year; 39% of visitors purchased carry-out, 22% did drive-through, and 3% opted for delivery. Patrons dined off-premise on 70% of quick-service restaurant (QSR) and coffee/snack shop visits, 49% of fast casual, 20% of family dining, 15% of casual dining, and 7% of fine dining trips (Riehle 2018).

Restaurants need to better align with America’s changing lifestyles, and the optimal timing for doing so is now. Nearly half (46%) of Boomers, 39% of Gen Xers, and 31% of Millennials say they’re not eating at restaurants as often as they would like (NRA 2017a).

Consumer economic confidence is at a 17-year high, and unemployment continues to fall. The U.S. Gross National Product grew 4.2% in the second quarter of 2018; gas prices are at their lowest level since 2014. The number of high-income households (over $100,000), which account for six out of 10 restaurant dollars, continues to grow (Riehle 2018).

Moreover, home meal preparation is at an all-time low, falling from 4.9 dinners per week to 4.6 in the past year; it is 4.0 for Millennials without children (FMI 2018a).

McDonald’s remained the largest QSR chain with U.S. systemwide sales of $37.6 billion in 2017, followed by Starbucks with $17.7 billion in sales. In one notable change on the top chain list, Chick-fil-A moved ahead of Dunkin Donuts last year. See the full list of top chains in Figure 1 (Technomic 2018a).

Over the past five years, delivery drove a 10% gain in restaurant visits and a 20% increase in delivery sales. While dinnertime still dominates, 5% of delivery traffic is now at breakfast, 29% at lunch, and 7% for p.m. snacks (NPD 2018e).

Millennial parents are increasing restaurant visits faster than any other group (Technomic 2017a). With Millennial parents already spending half (49%) of their food dollars on specialty foods, upgrading kids’ menus and catering to little diners is a big opportunity (SFA 2018).

Hispanics dine with their children on 42% of their restaurant visits versus 30% for non-Hispanic families (Veneziale 2017).

Healthy kids’ meals rank sixth among the overall hot culinary trends for 2018. Important trends for kids’ meals are ethnic inspired, gourmet, whole grain, and grilled and oven-baked items (NRA 2017b). Freshii is one of the first restaurant chains to offer a healthy school lunch program for kids.

All natural, organic, local, and GMO free are the health claims of greatest importance to Gen Z. Nine in 10 want to add more plant-based foods to their diet; a vegan claim enhances appeal for 29% (Culinary Visions 2018).

In 2017, 57% of U.S. households bought retail ready-to-eat fresh prepared food (e.g., rotisserie chicken, sandwiches, or sushi) often, sometimes, or every time they shopped; 53% bought heat-and-eat items, (e.g., fresh pizza, soups, or casseroles). Households with kids were most likely to do so (FMI 2017). 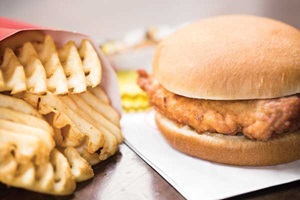 Six in 10 Millennials, Gen Xers, and members of households with kids would buy meal kits from their favorite restaurants. Chick-fil-A is rolling out meal kits in its home Atlanta market. Four in 10 chefs cite food halls as a hot trend for 2018 (NRA 2017b,c).

Street vendors, including America’s more than 2,000 food trucks, account for $3 billion in foodservice revenues, up 4.2% over last year (IBIS 2018).

The Urge to Splurge
Eight in 10 restaurant operators say their guests know more about food and make more adventuresome choices than they did two years ago (NRA 2017c).

Nearly half of those aged 18–34 say their preferences change with the season. Younger adults are twice as likely as Boomers to order ethnic foods at least once a week (Technomic 2017b).

Burrata, cheese curds—often used as a side or in poutine, beer cheese, vegan cheese, jalapeño cheddar, and pimento are among the fastest-growing cheeses in restaurants, along with raclette (Datassential 2018).

Gluten-free buns, pretzel bits, brioche, bao buns, potato rolls, and naan are among the fastest-growing breads on menus over the past four years. Lavash, ancient grain, telera, and roti are in what Datassential terms the “Inception Cycle” (Datassential 2018).

Lastly, consumption of sweet treats/snacks increases as the day goes on. Ice cream, cookies, brownies, cake, cupcakes, frozen pies, and frozen yogurt are the most frequently purchased sweet snacks. One in five consumers buy ethnic desserts such as churros (NPD 2017).

The Daypart Dilemma
Lunch has edged out dinner as the meal most often sourced from foodservice (Technomic 2018c; Figure 3). Four in 10 family, casual, QSR, and fast casual restaurant operators plan to put more effort into growing their dinner business; for fine dining restaurateurs, the figure is 66%. In addition, one-third are looking to grow lunch business; one in 10 seek to build breakfast business. Fewer than 7% are working to grow snack time sales (NRA 2017c).

Stacking, layering, and blending meat with vegetables to reduce calories are among the most exciting QSR trends. Sonic’s limited-time Signature Slinger is a lower-calorie (340 calories) burger made with 25% chopped mushrooms and 75% ground beef. Taco Bell introduced the Steak and Egg Stacker, a breakfast sandwich; KFC offers the Zinger Stacker Burger.

Fries have become the latest iconic restaurant item to undergo an upgrade. Taco Bell’s Nacho Fries on its Dollar Cravings menu sold more than 53 million orders in the first few weeks they were available (Luna 2018). Arby’s introduced Gyro Loaded Curly Fries, while other restaurants capitalize on the growing popularity of poutine.

While shrimp, salmon, and tuna remain the most consumed fish/seafood, trendy varieties include bluefin tuna, octopus, and branzino. Ceviche, sushi, poke, and seafood charcuterie are finding their way onto menus (NFI 2017).

Burgers, deli, breakfast, submarine, and chicken remain America’s most ordered sandwiches away from home. Four in 10 of those who order sandwiches at foodservice ordered at least one wrap away from home per month; 39% ordered a salad sandwich; 30%, a panini; 29%, a flatbread sandwich; and 25%, an ethnic sandwich (e.g., banh mi, tortas, Cubano) (Technomic 2018d).

All-day breakfast continues to drive sales; 54% of consumers overall and 60% of Millennials would order more breakfast items if they were available throughout the day (NRA 2017c).

Restaurant traffic for breakfast and morning snacks was up 1% for the year ended February 18, 2018. Lunch visits were flat, and dinner traffic was down 1% (Thorn 2018).

With one-third (34%) of adults eating a “second breakfast” midmorning, it’s no wonder that two-thirds of consumers, including 84% of men aged 25–34, find breakfast so appealing (Technomic 2018e).

Just about one-quarter of consumers say that beverage offerings are very important when deciding where to go for a meal; 31% like to try new unique restaurant drinks (Technomic 2018f).

Two-thirds of consumers say they’re more likely to buy a beverage that is fresh brewed. For 54%, locally produced is an incentive; antioxidant-rich encourages 52% to make a purchase; and 43% are influenced by probiotic content (Technomic 2018f).

Naturally Good
The availability of healthy menu items is the reason that 70% of consumers would choose one restaurant over another; 40% are influenced by diet-specific foods. Millennials, adults with kids, and Boomers are more likely to do so (NRA 2017c).

Avoiding appetizers and desserts is the most popular healthy eating strategy away from home. Four in 10 consumers say menu labeling with calorie counts has influenced their order (NRA 2017c).

Natural ingredients, minimally processed, organic, gluten-free, and house-made items are the most popular trends at limited-service restaurants. Six in 10 fine dining operators offered menu items grown or raised in an organic or environmentally friendly way; half of QSR, casual, and fast casual operators did so (NRA 2017c).

Four in 10 consumers are trying to eat more plant-based foods. Nearly two-thirds of Millennials want more plant-based ingredients mixed into wraps and burritos; 51% are interested in meat blended with grains and veggies (Datassential 2018). 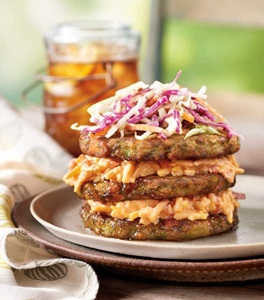 Watch for seaweed, nori, kelp, and other sea-based vegetables to make their way onto menus; 16% of adults bought a snack made from sea vegetables last year; 28% of Millennials did so (Packaged Facts 2017).

When dining out, 30% of consumers adhere to a specific diet, led by those aged 65 and over; 94% of QSR operators said they saw more customer interest in diet-specific foods last year versus two years ago (NRA 2017c).

Expect the trend in support of food restrictions, allergies, and intolerances to continue; Gen X and Millennial parents were 40% more likely than earlier generations to believe their kids suffered from these conditions (Packaged Facts 2014).

Sustainable Directions
Two-thirds of guests cite locally sourced foods as a reason they would choose one restaurant over another; 60% are looking for an environmentally friendly dining destination. Fine dining restaurants are the most likely to offer local foods (84%), followed by casual dining (63%) (NRA 2017c).

Nearly one-third of fine dining restaurants have an on-site garden (NRA 2017c). Hyperlocal and farm/estate branding are among the top hot culinary concepts for 2018 (NRA 2017b).

Two-thirds of consumers say humanely raised and/or antibiotic-free/hormone-free claims make them most likely to order meat/poultry; all natural, vegetarian fed, grass fed, free range, and organic are other influential descriptors (FMI 2018b).

McDonald’s recently pledged to cut greenhouse gas emissions 36% by 2030 and says it will focus on environmentally friendly restaurant upgrades and responsible sourcing (Kybam 2018).