Many hundreds of publications have been published about case-ready meat, but only a relatively small proportion of beef has been converted to this more efficient, economical, and safer centralized packaging. Reasons for the slow pace of retailer and consumer acceptance have been presented and argued with objectivity and emotion on all sides. Perhaps the realities lie in some of the technical challenges to be met or the bewildering array of solutions that have been suggested and introduced. 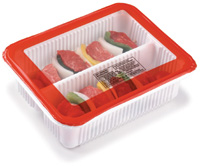 Quality of Red Meat
The most-effective methods to retain quality of fresh meat are initial sanitation—reduction of microbiological load and minimization of contamination—and temperature control—the lower the temperature, the lower the rate of physical, biochemical, and microbiological activity. Complementary to these technologies is modified-atmosphere packaging (elevated carbon dioxide level and altered oxygen level) or vacuum packaging (reduced O2 level), both of which enhance the effect of the fundamental preservation techniques.

Typical meat-spoilage microorganisms are effectively inhibited for prolonged periods by persistent atmospheric concentrations of CO2 above 20%. Reduction of temperature to refrigerated conditions extends the lag and exponential growth phases by multiples. Modified-atmosphere/ vacuum packaging is effective principally at low temperatures and is therefore not a replacement for temperature control but rather a complement.

Shelf life of beef cut into retail sizes in the backroom of a supermarket and placed in the retail meat display cabinet packaged in air-permeable structures is usually less than three days, and for ground beef, less than one day. In effect, modified-atmosphere or vacuum packaging permits three to four times the shelf life of beef packaged in air at the same temperature.

Maintaining Red-Meat Color
Microbiology of case-ready meat is the most significant issue, as it bears on both safety and eating quality, but another major issue is color. Color is usually independent of quality, texture, eating characteristics, spoilage condition, or temperature/time history, but it looms as one of the most important influences on the packaging of beef, since consumers have used color to judge beef quality for many decades.

When exposed to O2 in air, the purple muscle pigment myoglobin becomes loosely oxygenated and converts to oxymyoglobin, an unstable bright cherry-red pigment that seems to signal freshness to most consumers. When the pigment is fully oxidized, it converts to metmyoglobin, which has the typical brown color that consumers often regard as old beef.

Case-ready red meat is sometimes packaged under reduced O2 concentration to retard aerobic microbiological growth. At retail, the package is opened, and the meat is exposed to air and reacts to form the desirable red oxymyoglobin.

One technique for color retention that functions effectively and is currently allowed in the United States is the inclusion of up to 0.4% of carbon monoxide in the package atmosphere. CO produces a red color, not dissimilar to that of oxymyoglobin, that is effectively permanent regardless of other variables such as microbiological spoilage. The application of CO for red meat color was accepted by the U.S. Dept. of Agriculture about four years ago but was soon thereafter questioned by some industry organizations.

Packaging Technologies
A variety of technologies, systems, and equipment are currently used for processing and packaging case-ready fresh red meat, and others are under development or proposed. They include, among others, vacuum, modified atmosphere, high O2, low O2, very low O2, peelable-lid/rebloom, vacuum-skin semi-rigid package, tray, other rebloom, barrier expanded polystyrene, barrier coextruded or laminated solid plastic, solid trays, and master/mother pack. The most significant commercial technologies to date are use of master/mother pack and modified-atmosphere high-O2/high-CO2 packaging.

• Master/Mother Pack. In this concept, retail cuts of meat are air-packaged in individual retail meat packages. They are then multipacked together in a large bag, which may be evacuated and/or back-flushed with a CO2/O2/nitrogen mixture. The bag structure may have an O2 barrier to retard the exit of CO2 from the interior of the package and/or to deter O2 from entering the package. Once removed from the master bag, the product in the individual retail packages is subject to the same limited shelf life of air-packaged meats—3 or so days for ground meat and 5–9 days for intact cuts.

• Modified-Atmosphere Packaging. Because of its employment by Wal-Mart, modified-atmosphere packaging of fresh red meat—often designated as high-oxygen or high-ox—is probably the most widely used case-ready meat packaging technology in the U.S. In this technology, an initial atmosphere of high O2/CO2 is injected into the package and the atmosphere changes subsequently as a result of respiratory action of the contents, gas permeation, and transmission through leaks until equilibrium is reached. Sufficient gas must be present to compensate for that dissolved in the meat, so the volume of the package must be about double that of the meat contents. The package should be a gas-barrier structure—the cost of which is approximately four times that of the conventional backroom expanded polystyrene tray plus PVC film overwrap. The elevated O2 level leads to oxidative rancidity of lipid constituents, as well as to eventual conversion of the meat pigment to brown metmyoglobin, thus limiting shelf life.

This sequence presupposes temperature control to less than 36°F throughout the meat at all times. Modern distribution techniques such as direct "store door" delivery practiced by fluid milk, carbonated beverage, and salty snack producers are not employed. Such technologies would truncate the distribution time.

At the other end of the time spectrum, local centralized meat packaging operations could function with 4–5 days of quality shelf life for ground beef and 7–8 for intact cuts. With reasonable temperature, sanitation, and handling controls, such times are achievable.

A regional centralized meat facility could function with 7–8 days for ground beef, and 10–11 for intact cuts. This shelf life requires both good sanitation, temperature, and handling controls and a technology that permits the retention of red color and minimization of microbiological count.

No definitive shelf life objective for case-ready fresh red meat has been established. However rational a shelf life of 10–15 days may be as an objective, the "shelf-life race" may drive some operators to reach out into longer times and distance.

One of the major drivers toward retailer acceptance of case-ready systems is perceived microbiological safety of centrally packaged meat. The headlined illnesses and fatalities that have arisen from fresh red meat, however infrequent, have alerted both consumers and retailers to the hazard inherent in the product. For years, one of the arguments in favor of case-ready fresh red meat has been the great variability in sanitation among the 31,000 supermarket-backroom meat-cutting operations. A common belief is that centralized fresh meat operations would mitigate public health problems with the products.

Still Predicting Acceptance
In 1970, I predicted the coming of centralized meat packaging by 1976. In 1981, I predicted a surge by 1990. In 1986, I was certain that 1995 was the year of case-ready. The 2000 "ground swell" emerging from the Wal-Mart initiative and the Escherichia coli O157:H7 issue has not carried forward universally. Some penetration has occurred—with about half of the ground beef centrally packaged—but case-ready beef remains an elusive goal. Is the challenge sorting out a multiplicity of conflicting technologies? Is it too many false starts with bizarre science? Is the controversial color issue the determinant? Are we trying too hard to reach a shelf-life objective? Or does the barrier lie in marketing perception?

The one certainty is that no silver bullet will instantly deliver the safety, quality retention, shelf life, color, and economics that are ideal. Rather, we must depend on the basic three—sanitation, temperature, and relative humidity control—to propel us into the next generation.