One of the most significant assets of agriculture is the versatility of its output. It is precisely this versatility that contributes to the sustainability of agricultural systems, particularly when we are mindful of the outcomes of farming activities. The notion of food, feed, and fiber is only symbolic of agriculture’s multiple capabilities. Interestingly, not only can agriculture satisfy all those needs and more, but a single crop has the same potential. 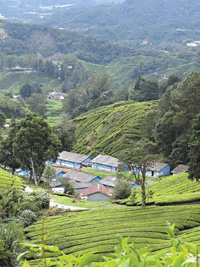 The quest for obtaining greater value from existing crops is ongoing and it is important to recognize the influence of a crop’s developmental stages on its ability to serve different purposes. Consequently, the core of this treatise will address the critical role of a plant’s lifecycle or developmental stages (ontogeny) on its ability to provide different benefits (ontogenetic contributions). To that end, the importance of these tangible outcomes on sustainable agriculture practices must be considered.

Historically, plants have been used for a variety of applications, ranging from foods to textiles to scents to medicines. Resourcefulness on the use of crops has allowed agricultural systems to remain viable, depending on different needs and conditions. The ability of a crop to serve many purposes not only implies an advantage in the use of resources, but can also create value for growers who can adjust their production schemes to satisfy different market requirements. In this sense, the versatility of crops can address two important pillars of sustainability: resource preservation and economic reward for growers. Furthermore, rural communities may also benefit when the same crop can serve as a source of employment for the processing of its multiple products and by-products. It is important to bear in mind, however, that a holistic view needs to be taken to understand the outcomes of agricultural activities in order to anticipate and recognize the potential for any residual effects.

Appropriate systems need to be defined when different applications are expected from a crop. Varietal selection, cultivation practices, and postharvest handling need to be adjusted according to the intended application of a crop. Moreover, a critical aspect is related to the ideal developmental stage at which a crop should be harvested to meet its intended use. The following manuscript discusses the importance of ontogeny on the ability of a crop to satisfy specific requirements.

Plant Composition and Ontogeny
The ability of plants to meet so many applications is dictated by their composition. Gross compositional differences are a feature in the classic distinction among cereals (sources of starch), oil crops (sources of oil), and pulses or leguminous crops (sources of protein). Specialty crops such as herbs tend to serve many purposes and the same species can be used for its culinary, aromatic, or medicinal value. Camellia sinensis, for instance, which is commonly used as tea in various forms (e.g., green, oolong, black, etc.) and has been ascribed a number of health-related benefits, can also be used in the production of oils, dyes, and aromatic ingredients.

Often, it is qualitative rather than quantitative differences that drive the use of specialty products. Many plant secondary metabolites, which tend to be present at lower levels than primary metabolites and may express themselves in certain species and plant organs, are responsible for the different application of specialty crops. Varietal genetic make-up is an important aspect behind the composition of plants; varieties of the same species can vary widely in composition and utilization (Brovelli, 2006).

Among secondary metabolites, phenolics play a leading role in affording plants with a variety of uses. Tannins, an application-derived term, can be chemically defined as “any phenolic compound of sufficiently high molecular weight containing sufficient hydroxyls and other suitable groups (i.e., carboxyls) to form effectively strong complexes with protein and other macromolecules under the particular environmental conditions being studied” (Horvath, 1981). While tannins were initially identified for their ability to weather-proof and preserve animal hides and turn them into leather, the tannins found in some fruits and herbs have been identified as nutraceuticals, defined as foods or ingredients that may provide medical, physiological, and/or health benefits.

Plant composition is dictated by the way in which the plant invests its carbon and other acquired elements. Considerable compositional differences exist among plant organs and these differences, particularly in protein, lignin, minerals, and non-structural carbohydrates, are further accentuated by environmental factors such as light, soil, nutrient level, and/or atmospheric composition (Poorter and Villar, 2006). Furthermore, the stress resulting from insect or pathogen attack can change the phytochemical profile of a plant and thus, the balance among its different organs (Brovelli, 2006).

Both primary and secondary metabolites can experience fluctuations as a result of ontogeny and genetic control. For example, the edible quality of bananas is driven by the depolymerization of starch into soluble sugars. It is this enzymatic conversion of starch into sugars that is responsible for the fruit’s sweetness. This ontogenetic episode is controlled by α-amylase, which is primarily up-regulated de novo during ripening (Oliveira do Nascimento et al., 2006). In other cases, such as in the final development stages of grapes, it is the translocation of sugars from the leaves that contribute to the increases in soluble solids within the fruit (Fougere-Rifot et al., 1995).

Interrelationships among metabolites also occur during ontogeny. During rapid leaf growth in lemongrass, for example, radiolabeled carbon resulting from the degradation of starch was seen as the basis for the synthesis of essential oil. Interestingly, even when acetate, the precursor of lemongrass essential oil was supplied to the plant at different stages, essential oil synthesis was much higher in young than in mature leaves (Singh et al., 1991). This highlights the importance of ontogeny as a driver in compositional changes.

Ontogenetic changes in the metabolism of tannins are also significant and relate to the various uses that tannin-rich plants can possess. In grapes, tannins mainly accumulate in the skin and seed of the berries and while skin tannins increase during maturation, the evolution of tannins in the seed varies depending on their degree of polymerization (Delgado and Martin, 2001). In sugarcane juice, tannins contribute to color and astringency. During cane maturation, tannins exhibit a pronounced decline, which parallels the activity of polyphenol oxidase (Qudsieh, 2002). Condensed tannins have been ascribed antinutritional effects in some legumes, mainly as they relate to a decreased absorption of essential amino acids. Legume seeds tend to be high in condensed tannins and based on the ontogenetic changes in this fraction, germination has been proposed as a means of ameliorating the nutritive quality of legumes (Ayet et al., 1997).

Ontogeny and Use
Recent times have seen an increase in the use of plants for new applications. Newer isolation technologies can be employed in finding new functions for existing crops by extracting valuable nutraceuticals. Consequently, many underexploited species are finding new markets. Newer varieties of the same species are being bred to satisfy new market requirements.

Plant composition is the key behind new or alternative uses. Since ontogeny is so tightly connected to composition, it is apparent that ontogeny needs to be considered when trying to optimize the use of an agricultural product. It is critical then to conduct experiments to determine the ideal harvest window for a product, bearing in mind what its intended use will be. Anticipating the intended use will allow for the selection of an adequate decision criterion. The decision criterion is the test or series of tests that will be conducted to judge whether a commodity has reached its functional maturity (Figure 1). The decision criterion needs to closely reflect the requirements of the final consumer/user of the product, whether it is an affective perception or a physico-chemical measurement.

Both chemical assays and in-vitro assays not only can shed light on whether a commodity has accumulated a compound of interest (fiber, essential oils, nutrients, etc.), but also on whether some antinutritional factor has been reduced as a result of ontogeny. In-vitro starch digestibility, paired with tannin analysis, was used to prove the nutritional benefits of legume germination and dehulling (Ghavidel and Prakash, 2007). In reference to medicinal plants, gene expression served as a tool to track down immunostimulation as a result of ontogenetic changes (Brovelli et al., 2005).

A robust decision criterion can also be used as a tool to predict the quality of a commodity as judged by the final consumer. The lemon odor in lemongrass, a key attribute of this plant’s quality, is related to its content of citral. A mathematical model to predict the concentration of citral was developed based on the yield of essential oils and energy summation indices. This equation allows for a better understanding of growth processes as well as for predicting the impact of changes in crop management strategies and genetic improvements (Shahi et al., 2003).

Maturity Indices
Since decision criteria assays are too complex for practical, routine measurements to determine when a commodity is ready for harvest, extensive research has been conducted in the selection of maturity or harvest indices, which are the parameters that indicate when a commodity has reached its functional maturity and is ready for harvest. Different crops can rely on different maturity indices, such as morphology (e.g., changes in appearance of a fruit), crop phenology (e.g., days after sowing), and physiology (e.g., changes in respiration rate). Researchers conducting maturity index determinations will be faced with a number of options as possible indices; however, it is only the one(s) which shows a good correlation with the decision criterion that offers the greatest value. Furthermore, maturity indices should be easily measured. For instance, the determination of soluble solids by refractometry is a practical test that can be carried out prior to harvest of oranges. Lengthy determinations or assays are not a viable option since they do not allow for immediate harvest of the crop once it has reached its functional maturity.

Maturity indices that merely reflect changes over time are not necessarily good indicators of how the commodity will perform in its final application. As part of the research protocol, researchers should try to replicate the postharvest scheme that the commodity will undergo during routine operations. As an example, if the commodity is to be transported at ambient temperature for several days prior to consumption, this delay between harvest and testing as per the decision criterion should be observed, since natural senescence could impact the intended use/functionality of the plant. It is important to realize that maturity indices can only be as robust as the conditions under which they were generated. Conducting experimentation during several harvest seasons and sites is critical to the accuracy of a maturity index.

As agriculture looks to diversify its output as embedded in a context of sustainable systems, understanding the variations in plant composition will receive further interest. With ontogeny as a driving factor behind compositional changes, it is expected that greater emphasis will be placed on recognizing the link between a crop’s maturity and its suitability for its intended use. It is critical then to follow a procedural approach to the determination of maturity indices, which yields results that are not only accurate, but truly in agreement with the consumer’s final judgment and expectations.

Delgado R. and Martin P. 2001. Evolution of the phenolic composition of red grapes during maturation. Alimentaria 38: 139-145.

Ghavidel, R.A. and Prakash, J. 2007. The impact of germination and dehulling on nutrients, antinutrients, in-vitro iron and calcium bioavailability and in vitro starch and protein digestibility of some legume seeds. LWT - Food Sci. and Tech. 40: 1292-1299.