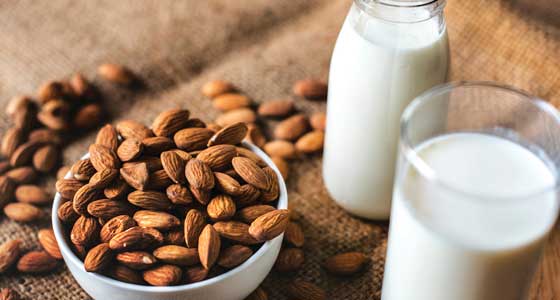 History, Market, and Nutrition
Plant-based milks have a long history in many cultures around the world. The word “milk” has been used since around 1200 AD to refer to plant juices. Of all the plant-based milks, coconut milk has the longest tradition of use. It originated in India and Southeast Asia and has been used as both a drink and an ingredient for nutrition and ceremonial offerings. Soy milk also has a long history and was discovered in 1365 in China. Traditionally, it was used in Chinese cooking. Later it was consumed as a drink, beginning around 1866. In 1910 the first soy milk factory was established near Paris and around the same time, the first soy milk patent was granted. More recently, in the 1970s and 1980s, soy milk has become increasing popular throughout the world.

Similarly, almond milk is believed to have originated in the 13th century when it was first referenced in Baghdadi and Egyptian cookbooks, as well as in the English literature. Recently, in the 19th and early 20th centuries, the popularity of almond milk has soared. Horchata is a blended almond-based milk that includes other ingredients like sesame seeds, rice, barley, cashews, and tiger nuts. Unique horchata recipes have been used as far back as the eighth century to create this traditional Spanish plant-based beverage. Rice milk is thought to have been discovered more recently, in 1921 in San Francisco.

According to Nielsen data, retail sales of plant-based foods in the United States rose 20% to $3.3 billion in the past year, growing from a relatively niche market to a mainstream food category, with nondairy milks representing the largest portion of the market at $1.6 billion. The global plant milk market is estimated to be worth $16.3 billion this year, up from $7.4 billion in 2010.

In the United States, plant-based milk makes up 9.3% of the total milk market. Sales of refrigerated almond and coconut milk grew 9.8% and 5.2%, respectively, this year, and sales of shelf-stable almond milk and coconut milk grew 4% and 3.3%, respectively. The most popular plant-based milks are almond milk, coconut milk, rice milk, and soy milk. In 2010 almond milk surpassed soy milk in terms of popularity in the United States. In Europe, soy and oat milks are very popular. The strongest growth in the category this past year came from other plant-based milks, which include milk made from peas, lupine, flax, hazelnut, cashews, and hemp. 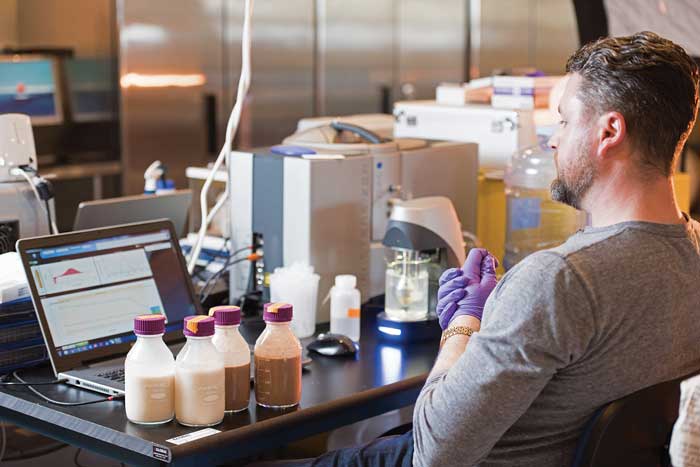 A Look at the Processes
What follows is a step-by-step look at the processes involved in producing a plant-based milk.

• Plant Growth and Harvesting. Growing and harvesting conditions have a large impact on the properties of the final beverages. A wide range of cereals, legumes, nuts, and seeds can be used to make plant-based milks. The terroir and growing environment are important contributors to properties of the plant-based milk. Changes in climate, soil, and surrounding vegetation subtly change the plants and need to be defined to create optimal final products. Following harvesting, conditions for storage prior to processing are crucial to ensuring that the cereals, legumes, nuts, and seeds do not oxidize or degrade in quality before being processed into milks.

• Wet Versus Dry Processing. There are two main process methods for producing plant-based milks. One is a wet process, and the other is a dry process.

The wet process, which involves soaking and grinding, begins with the cereals, legumes, nuts, or seeds being placed in large stainless steel kettles containing filtered water and a small amount of salt. Soaking times vary based on the plant hydration rate but can take up to 12 hours. Soaking can remove enzyme inhibitors, improving nutrient digestibility and bioavailability. It also softens the plant to aid in further processing. After soaking, the cereals, legumes, nuts, or seeds are rinsed and drained. Next, they are ground into a smooth puree or paste. Hammer mills are commonly used at this stage in processing.

In some cases, enzymes may be added at this step or the soaking step to hydrolyze starches, for example, for oat milk. In other cases, a blanching step may be employed with or without the addition of sodium bicarbonate, as is performed for soy milks. Some nuts, like macadamias, cashews, and pecans, grind easily, yielding smooth purees or pastes; however, other nuts and plant materials, like almonds, retain undesirable textures after grinding due to their skins or other fibrous components. These fibrous components can be centrifuged or filtered out of the milks to obtain smooth final textures. Alternately, fine grinding processes that result in very small particle sizes can be used to obtain desired final consistencies. Heating and homogenization are often performed at this stage to inactivate enzymes and improve stability of the final beverage.

The second alternative process, the dry process, involves harvesting the plant, legumes or peanuts, for example, drying them (with or without blanching), and milling them into flours. Hammer, pin, or other types of mills may be used. The flour can then be processed to separate the protein from the starch and fiber as desired. Then the protein concentrate or isolate can be used in the next step to formulate the beverage. The dry process often results in higher protein contents in the end products.

• Formulating Into Beverages. During final formulation, water, flavors, vitamins, and minerals may be added. Nutrient levels and amounts of added sugar are adjusted depending on the beverage. Amounts of fat can also be modified, and thickeners and/or stabilizers added as desired. In some cases, the pH of the slurry is neutralized by adding sodium hydroxide. Final homogenization and heat treatment is completed prior to packaging. Thermal processing is commonly used to ensure safety of the final plant-based milks. High pressure processing can also be used.

• Quality Control. Final product properties are monitored during development of plant-based beverages, as well as during production, in order to ensure optimum final product quality. Some of the quality parameters tested include viscosity, particle size, protein content and digestibility, nutrient and flavor analyses, microbiological tests, and detailed sensory evaluations.

• Packaging. After the plant milk is processed, it is then packaged as needed for distribution and storage.

Recent Innovations
Several innovation fronts are being explored for plant-based milks. One of these is the opportunity for plant-based milk blends. Blends such as almond/oat and almond/cold brew coffee are trendy and increasing in popularity. The market and types of fermented plant-based beverages, although not discussed in this column, are also anticipated to grow in the future. Finally, it is envisioned that advanced nonthermal technologies will be applied to plant-based milks commercially more often in the years to come. So the next time you sip a plant-based milk, I hope you take pride and pleasure in knowing some of what went into processing it.