Happy Birthday, Potato Chip! And Other Snack Developments
One of the most popular salty snacks, the potato chip, is 150 years old this year, and the Snack Food Industry is celebrating, according to Ann Wilkes (phone 703-836-4500), Vice President of Communications for the Snack Food Association in Alexandria, Va.. Speaking from Snaxpo, the industry’s annual meeting and show in San Francisco in March, Wilkes described the gala dinner and celebration the attendees enjoyed and also commented on the trends she sees in the industry. 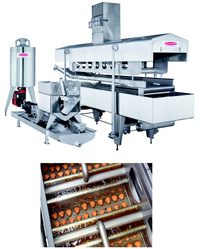 The potato chip, she said, was invented by George Crum, a cook at Moon’s Lake House in Saratoga Springs, N.Y., in 1853. It quickly became popular in restaurants along the East Coast. Later innovations were packaging in small bags by Laura Scudder in Monterey Park, Calif., and larger-scale production by names still familiar such as Wise, Utz, Mike-sells, and Lay’s. Today, retail sales in the United States are about $6 billion/year.

Wilkes also spoke of the differences between snack foods in other countries and those popular in the U.S. For example, seaweed and shrimp flavors are popular in the Orient but are rarely found here. Dairy-based flavors, such as sour cream, are common in Scandinavia, and almost anything with paprika sells in Germany. She compared the German paprika to the U.S. barbecue flavors.

Other trends Wilkes sees are manipulation of fat content in fried snacks by using higher temperatures, baking instead of frying, and steam stripping to remove excess oil from fried snacks.

Technical Platforms
Frying is still one of the most significant unit operations or technologies, and it has many variations. Frying can be continuous or batch; take place under vacuum, atmospheric pressure, or elevated pressure; and may involve immersion of food pieces in hot oil or spraying with hot oil.

Normally the oil used is vegetable oil, but the oil can also be olestra, a sucrose polyester made by Procter & Gamble Co., Cincinnati, Ohio, that is less digestible and thus less likely to contribute unwanted calories. In some fried snacks, oil may be 30% of the final product, contributing to both flavor and caloric content.

Motivated by health concerns of consumers, manufacturers have developed snacks with less fat. One technique is steam stripping to remove some oil while retaining the characteristic flavor and texture of traditional potato and corn snacks. Other approaches are baking or drying of “fabricated” snacks made from dehydrated potato and baking instead of frying extruded corn curls. These have no added oil and usually rely on added flavors.

Other baked snacks include pretzels, which are based on wheat dough and formed into various sizes and shapes. Pretzels acquire their characteristic surface sheen by a dip in a lye solution. This same sheen makes adding flavors a technical challenge. There are proprietary technologies for applying flavor systems to coat pretzels.

Another major technique is extrusion, which may be high shear or low shear. For example, a high-shear, relatively short extruder is used for puffed corn snacks and more-dense corn chips. Low-shear extruders are used for pasta and for unpuffed pellets. Pellets are sometimes shipped from a central plant to locations close to markets where they are fried to a final form for sale. In other cases, the pellets are used almost immediately in a complex process to produce three-dimensional shapes.

Still other snacks are made by sheeting and cutting. Examples are tortilla chips made from ground whole corn which has been soaked in a lime slurry to soften the skins. After sheeting, tortilla chips are generally fried but can also be baked.

Equipment Innovators
Clextral, Tampa, Fla., is one of the major suppliers of twin-screw extruders in the world. It is a French company that operates internationally, according to Gilles Maller (phone 813-854-4434), Vice President, Extrusion for North and Latin America. He says that twin-screw extrusion is often used for higher-volume production of low-density, i.e., highly puffed, snacks, such as corn curls. New variations include snacks with two colors in the same piece and filled salty snacks, achieved by coextrusion of filling and exterior doughs.

The company has a family of extruders, called Evolum, with screw diameters ranging from 32 to 187 mm, which are designed to make scale-up more reliable. Each model has the same ratio of contained volume as the next smaller machine. To compensate for the fact that surface-to-volume ratio is not constant as machines become larger, Clextral has developed proprietary software to model heat transfer in its twin-screw extruders. Thus, the company claims that it can accurately predict performance based on experiments at a small scale.

To complete its equipment offerings in the snack area, Clextral has recently acquired Afrem, a manufacturer of low-shear extruders and drying systems for pasta. These are commonly used to manufacture pellets, as mentioned above. Pellets enable high-efficiency production at central locations and completion of the process close to market. The final products usually have very low bulk density and can be fragile, so shipping them long distances is expensive.

New Frying Technology
Heat and Control, Inc., Hayward, Calif., is a major supplier of snack processing equipment. James Padilla (phone 800-227-5980), Director of Product Development, described the company’s patented HeatWave® fryer, which uses falling curtains of hot oil to enrobe food products passing beneath them on a wire mesh belt. The complete fryer system operates with a very small volume of oil. As a result, oil carried out of the fryer with product is quickly replaced with fresh oil, resulting in a rapid oil turnover rate, so foods taste fresh and have a long shelf life.

The HeatWave concept was developed especially to minimize oil quantity and maximize removal of fines. In standard fryers, product particles remain suspended in the oil and are carried along with it, causing off-flavors to develop and promoting degradation of the oil. HeatWave uses the returning product belt to drag along the oil collection pan and move any fines to the infeed of the fryer, where they are discharged into a continuous filter for removal.

Most modern fryers have external heaters and filters for the oil to provide good temperature control and fines removal. HeatWave, with its lower inventory of oil, removes fines quickly. The falling curtains are created by overflow weirs above the moving belt. By controlling the oil flow to each weir, the heat transfer rate can be modified as product moves through the machine. The same fryer can be used with hot water as a blancher.

Padilla said that customers using HeatWave have been able to roast deeper beds of nuts and produce a desirable texture. The company is testing the machine for donut frying.

One paradox of snack processing that is illustrated by several of the examples described here is that new products, especially those catering to health-conscious consumers, rely on more-complex processes and equipment, such as steam stripping, extrusion, and new types of fryers. On the other hand, these same technologies can find wide application in other areas of food processing, as exemplified by extrusion of pet foods, breakfast cereals, and fish foods and by frying of shrimp and roasting of nuts.

Membrane Processing
Graver Technologies, Glasgow, Del., offers an inorganic tubular membrane supported on porous stainless steel, according to Scott Wittwer (phone 302-731-3539), Product Manager. The porous stainless steel is coated with titanium dioxide sintered to a type of porous ceramic. In other applications, a renewable organic membrane may be deposited on the titanium dioxide. The ceramic membrane has been tested in snack processing for fines removal from oil, starch recovery from wastewater, and reuse of cleaning solutions.

The combination of ceramic and stainless steel permits high-temperature operation, treating of aggressive and corrosive solutions, and use of strong cleaning solutions. As with other membrane processes, there is a tradeoff between permeation rates and selectivity, with lower rates for removal of smaller particles. The organic membranes are necessary to high selectivity, but they eventually deteriorate at extreme conditions. However, they are easily recreated as necessary, after thorough cleaning of the substrate.

The company custom designs and fabricates modules to suit the desired application. The technology has been used in corn syrup production, beer filtration, and pharmaceutical production.