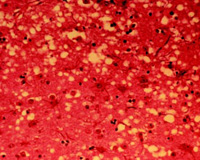 The name of the disease refers to the fact that as the disease progresses, the infected animal’s brain becomes full of holes like a sponge. The disease may develop in a relatively short time or, as is more often, take decades to develop. Some human diseases exist that are similar to these animal diseases. Creutzfeldt-Jakob disease (CJD) is a slow degenerative disease that affects the central nervous system in humans. CJD occurs sporadically worldwide at a rate of approximately one case per million people per year. Since 1996, evidence has indicated a causal relationship between ongoing outbreaks of BSE in cattle and a new variant CJD called variant CJD (vCJD).

Some controversy exists regarding the nature of the transmissible agent that causes these fatal conditions, but the most accepted theory is that the agent is a modified form of a normal cell surface component known as a prion. These prions are disease causing and less soluble and more resistant to enzyme degradation than normal proteins.

Prions are extremely resistant to heat and chemicals. Even heating to 100°C cannot inactivate them adequately, and many disinfectants have hardly any effect. A disease-specific protein, called scrapie prion protein or PrPSc, is found in infected brains and other organs. It is derived from the normal form of the prion protein, PrPC, which occurs in uninfected brains.

The transmissible possibilities of the infectious agent moving between animal species and between animals and humans via an oral route is of great concern. This concern is due to an outbreak of the BSE disease in cattle in the UK and CJD in the British population exposed to meat from cattle that had BSE.

BSE was first recognized in Great Britain in November 1986, but the first cases probably occurred in early 1985. It is not definitely known if the disease originated from scrapie-infected meat and bone meal that was used as a protein supplement in cattle feeds, but there is strong evidence and general agreement that the outbreak was amplified by feeding rendered infected cattle meat-and-bone meal to young calves. During the peak of the disease in 1992, about 1% of the adult cattle in the UK had the disease. Lower incidences have occurred in cattle in Ireland, France, Switzerland, the Netherlands, and Portugal. A few cases have been recorded in Canada, Germany, Denmark, Italy, the Falkland Islands, and the Sultanate of Oman in animals exported from Great Britain. Current information on the number of cases of BSE worldwide and in the UK is available at the Web site of the IOE (World Organization for Animal Health) at www.oie.int/eng/info/en_esb.htm.

According to the Animal and Plant Health Inspection Service of the U.S. Dept. of Agriculture, the first case of BSE in the United States was confirmed on December 23, 2003. Information about BSE in the U.S. is available at www.nal.usda.gov/awic/news/bse/bse.htm. Surveillance information is available at www.aphis.usda.gov/lpa/issues/bse/bsesurveillance.html and www.cdc.gov/ncidod/diseases/cjd/bse_cjd_qa.htm.

Current Methods
There is no approved test to diagnose BSE in live animals, although a tentative diagnosis may be made based on clinical signs.

Several rapid immunological test kits have been developed for the rapid detection of prions specific to BSE in the central nervous system tissue of cattle. Currently, a European Union commission has approved five such tests to screen slaughtered cattle for BSE. Two rapid postmortem tests are available in the U.S. to diagnose chronic wasting disease in deer and elk. However, there is no USDA-or Food and Drug Administration–approved test to detect TSEs in live animals or people at this time.

The rapid test most used to screen for BSE in Europe is the Western blot test produced by Prionics AG in Switzerland. The test, called Prionics Check Western, uses gel electrophorosis with a specific antibody against PrP after the PrP in homogenized brain tissue has been broken down by proteinase K. The tests are suitable for routine mass screening operations. A positive BSE diagnosis is based on detection via specific antibodies, molecular weight, and glycosylation patterns. The procedure may be used with multi-channel pipettes and 96-well micro-titration plates. The test can also be partly automated by using automatic homogenizers and membrane incubators.

The Enfer Scientific TSE assay is an enzyme-linked immunosorbent assay (ELISA). After digestion by proteinase K, the residual PrPSc binds to a capture antibody at the bottom of the plate wells. A detection antibody with an activating enzyme is added after the wells have been washed. This second antibody binds to PrPSc and colors the substrate when PrPSc is present.

The Bio-Rad test is also an ELISA, but in the initial step after digestion, two different antibodies bind to different epitopes of PrPSc. The test, developed in collaboration with the French Commissariat à l’Energie Atomique, has two stages. During the first stage, PrPSc is selectively purified through a special process involving treatment with proteinase K under such conditions that normal PrP undergoes total degradation. Most of the PrPSc immunoreactivity is retained. The soluble PrPSc is then measured using the DAS-ELISA immunometric assay.

The Bio-Rad test kit runs on an automated robotics platform that helps with sample preparation, enabling laboratories to provide faster results. The testing platform can process up to 1,000 samples in 8 hr.

The Prionics Check LIA is a luminescence immunoassay, which allows for the simple detection of the disease-specific prions. The test is said to be suited for laboratories processing a sample volume of several hundred assays per day. The test employs two monoclonal sandwich antibodies, one to capture the proteinase K–resistant fragment and another to detect that fragment. The detection antibody is bound to horseradish peroxidase, which emits light upon exposure to a chemiluminescent substrate. The amount of light emitted correlates with the amount of prions in the sample.

The InPro CDI-5 conformation-dependent immunoassay may possibly be used in live cows. The test, which employs two recombinant radio-labeled antibody fragments to capture and detect PrP, has been used in a field trial to check for signs of the disease in the brains of 11,000 slaughtered cows in Spain, the UK, and Germany. Results were compared to those from standard immunoassays performed on the same animals. The test was able to detect PrP concentrations as low as 1 ng/mL. Unlike most other assays, the test does not involve treatment with proteinase K, thus increasing the number of prions that can be detected.

The company plans to offer an automated version of the CDI, known as the aCDI, to meet the high-throughput needs of laboratories.

Ongoing Research
According to a 2004 National Prion Research Program report, “Advancing Prion Science,” the main limitation of all five EC-approved tests is that they cannot detect PrPSc in infected cattle until BSE has incubated long enough for the PrPSc to accumulate significantly in brain tissue. So the approved tests are used in clinically sick cattle or in apparently healthy cattle that are near the onset of prion disease. These limitations have increased attempts to develop more sensitive BSE tests, including include animal bioassays, cell culture assay systems, and cell-free conversion assays. For more information on these diagnostics, see the report at www.nap.edu/books/0309090601/html.

London-based Microsens Biotechnologies has developed ligands that have specificity for resistant PrP. A group of polymeric compounds has been identified with the ability to bind PrP with high selectivity in BSE- and scrapie-infected bovine-brain tissue. An immunometric assay has been established, with the ligand immobilized directly to the wells of a microplate. After addition of bovine brain homogenate and direct capture of PrP, the bound prion is detected with a commercially available prion-specific antibody/peroxidase conjugate. The assay is simpler than the proteinase K digestion methods and is suitable for automation on an ELISA processor.

Contract laboratories are offering various trace programs to ensure against BSE. The EU has incorporated a variety of new regulations in recent years. In particular, meat products are subject to increasingly strict controls. Every piece of meat should, as far as possible, be labeled and traceable to its origin.

VeriPrime Inc. in January announced that Abbott Laboratories has been certified to provide its members and licensees with rapid testing for BSE. The certification will allow Abbott to provide rapid BSE testing as a component of the VeriPrime food safety system launched in September 2003 as a way to offer additional food safety assurances to consumers. The rapid BSE test was licensed by Abbott to Ireland-based Enfer Scientific Ltd. in 2001. For more information, see www.veriprime.com.

According to the 2004 report by the National Prion Research Program, the overall lack of knowledge about TSEs is a barrier to the development of diagnostics. And the development of TSE diagnostics will require “quantum leaps” rather than just improvements to existing tools. Existing tests are several orders of magnitude less sensitive than is optimal, and truly novel methods and reagents that detect or bind to prions are needed. Many questions remain regarding prions and TSEs, and more and improved diagnostic tests will help to answer these questions.

Additional BSE Information is available from the National Veterinary Services Laboratories at www.aphis.usda.gov/vs/nvsl; the National Animal Disease Center at www.nadc.ars.usda.gov; USDA at www.usda.gov; and the Centers for Disease Control and Prevention at www.cdc.gov.