A two-day Active Packaging Conference in Chicago in October 2005, sponsored by the Food Products Association and orchestrated by FPA’s Jim Charbonneau and Ray Bourque, invited ten commercial suppliers to speak about their new active and intelligent packaging products. Here’s a summary of some of the products. 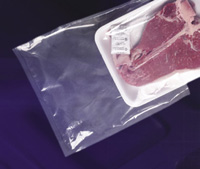 In the realm of centralized packaging for fresh meats and poultry, an inexorable drive toward displacing backroom processing for fresh meat and poultry has been underway since the 1960s, with poultry having already made the transition, while beef is moving very slowly. Wal-Mart’s 21st-century initiative of having their suppliers apply high-oxygen, high-carbon dioxide packaging (to retain red color for a few days) in barrier structures has not been widely followed by other United States retailers. Thus, even with ground beef nearing the 50% level being case ready, total case-ready beef remains at a relatively low level. The situation is not the result of a paucity of technologies.

Pactiv’s Active Tech R3 technology claims up to 30 days of chilled shelf life for beef with “instant” red color reblooming. Presentation of beef red color has been a more persistent challenge than retarding microbiological spoilage in red meat because many consumers equate color with quality. However erroneous this perception is, “perception is reality” with most red meat consumers. In the Active Tech R3 system, the meat is packaged on a conventional expanded polystyrene tray wrapped with PVC film. The primary package is placed in a barrier film and sealed under nitrogen with a rapid-action, high-capacity oxygen scavenger. For shelf display, the inner package is removed from the modified-atmosphere package, and the air permeates the PVC to rebloom the meat. The system is reported to offer longer chilled shelf life than passive low oxygen because the internal oxygen concentration is well above 500 ppm and thus damaging to the desirable oxymyoglobin red color.

• Antimicrobial Pads. Paper Pak Industries, LaVerne, Calif. (www.pp-industries.com), a major manufacturer of absorbent pads placed in plastic trays of fresh meat, poultry, seafood, and poultry, disclosed carbon dioxide and complementary antimicrobials in their pads activated by moisture and purge from the food product. Sayandro Versteylen, PPI’s Director of Product Technology, described absorbent pads originally engineered to help capture the purge or drip that is inevitable from fresh food products. He also explained that purge in pads constitutes a good microbiological medium whose volatile end products may contaminate the very products the pads are intended to protect. Regardless of the core pad material—cellulose or superabsorbent polymer—excess purge can support the growth of microorganisms which are inevitable in the liquid.

For the more than 50 years of their commercial existence, absorbent pads have functioned passively, but PPI is shifting the role toward active functionality by introducing modifiers to alter the internal composition of the total packaging system. Absorbent pads constitute an excellent vehicle to drive activity because they are normally present and in the middle of the package, usually in contact with a large surface area of the food, and because moisture from the product is present. The core material can be engineered to carry active constituents such as carbon dioxide generators, oxygen scavengers, odor absorbers, or aroma generators. Any or all of these modifiers singly or in concert may enhance the interior environment of closed/sealed packages, whether made in a retail store backroom for short-term shelf life extension or food processing operation for longer-term chilled shelf life.

• Oxygen Scavengers. Multisorb Technologies, Buffalo, N.Y. (www.multisorb.com), long one of the world’s leading suppliers of desiccants and oxygen scavenger sachets and labels, now offers a range of active labels. For maximum effectiveness, the package must be a gas barrier (<15 cc O2/m2/day) and be hermetically sealed. In chilled products such as cured meats, passive barrier is not sufficient to retard color and flavor oxidation.

Shelf life of fresh bakery goods may be extended by combinations of humectants and oxygen scavengers. Bakery products such as cakes and breads represent major users of oxygen scavengers,  recognizing that staling is generally unaffected by active packaging. Because vacuum packaging can physically damage soft bakery goods, oxygen scavengers are proposed. Other grain product applications include tortillas, fresh pasta, and snack foods.

• Biosensors to Signal Food Safety/Quality Changes. Dramatically publicized over the past decade or so have been devices alleged to detect and signal the presence of microbiological growth in packaged foods. Even louder have been the several claims that the presence of specific pathogenic microorganisms or microbial toxins could be instantly detected and transmitted to the package surface to inform members of the distribution channel and/or consumers that the contained product was hazardous to human health.

Since the best of the rapid microbiological test methods are relatively complex and require hours to accurately measure the result, the notion of instant recognition has left many of us wondering whether these claims are real, creative, or the figments of vivid opportunistic deceptions. One rational voice has emerged in this chaotic cacaphony. Auburn University’s James Barbaree ([email protected])heads a multidisciplinary research team that has been probing the potential for applying biosensors for signaling microbiological growth. His Detection and Food Safety team is marrying the latest in microbiological detection with electronic sensing, recording, and signaling (e.g., RFID) in and on packages to suggest that some time in the future a valid technology might be commercialized.

The Auburn systems are derived from basic biomolecular recognition science such as antibody–antigen and phage capture (direct binding of the phage or phage skinning). Both principles have been demonstrated in the laboratory to be capable of visible indication. Salmonella antibody may be deposited on a sensor surface, using a patented Auburn University process. Phage capture of bound Bacillus anthracis spores and Salmonella cells has occurred on a magnetostrictive sensor surface. Phage capture produces higher coverage than antibodies and can be highly specific. A variety of sensor platforms are being investigated in concert with the microbiological concepts.

All of the proposed devices require target species to be brought to the sensor, which engenders complex microfluidics, requiring on-board power source, complicated semi-conductor processing, and wires for connection or separate RFID unit.

An intriguing concept put forward in this context was a fruit ripeness signaler based on ethylene emission monitoring by a magnetostrictive ethylene sensor transmitting the data through a magnetic cell into an electronic transceiver.

• Antimicrobial Coatings. Clemson University’s Kay Cooksey updated her research on nisin and analogs as antimicrobial package-material coatings. Among the other antimicrobials being studied are chitosan, chlorine dioxide, allyl isothiocyanate, silver ions, and plant extracts such as rosemary. Still suffering from extremely high costs, nisin is a polypeptide produced by microbiological fermentation. The bacteriocin was coated in methyl cellulose or hydroxypropyl methyl cellulose on low-density polyethylene. Microorganisms such as Listeria were inhibited by the nisin-coated package film at levels of 156 IU/mL.

The antimicrobial activity of chitosan (derived from shellfish) at 1 and 2% solution in acetic acid was demonstrated against Listeria. Chlorine dioxide released from sachets reduced counts in fresh chicken by 1–1.5 logs, but the release rate was a significant variable.

Volatility of the antimicrobial is another active variable affecting the final result, with higher vapor pressure exerting greater effects.

• Antimicrobials and Shelf Life. Michigan State University’s School of Packaging is the world’s pre-eminent body devoted to our favorite subject. Former school director Bruce Harte discussed a series of experiments to measure the effect of on-package antimicrobials on the shelf life of contained food. The antimicrobials were blended into polymers; blended into coatings; delivered as pads, strips, or cards; or distributed as powders. Target microorganisms included Listeria, mesophilic aerobes, and lactic acid formers. Depending on the release rate, sorbic acid demonstrated microbiological growth inhibition in  packages of bologna and Cheddar cheese.

The results from the various university studies are hardly highly conclusive for incorporating the “mainstream” antimicrobials. It should be intriguing that sorbic acid and carbon dioxide appear to the university research community to have some merit, to be applied in short order by commercial interests. In contrast, some such as chlorine dioxide and chitosan do not deliver consistent reported results.

Intelligent Packaging
With regard to intelligent packaging, the following conclusions were made:

Location sensors and signalers for inventory tracking not only are feasible, but are also commercial. Radiofrequency identification (RFID) will be applied more often than bar codes to accelerate information exchange and industry acceptance.

Current applications of intelligent packaging technology are technically feasible to track physical as contrasted to biological attributes. Time and temperature may be cumulatively integrated, measured, sent to someone or someplace to initiate action, and recorded. Time–temperature integrators (TTIs) may function as surrogates for microbiological and/or biochemical deterioration of packaged food. In contrast, current microbiological detectors are still in development.

Biological sensing technology integrated into packaging is feasible but in the future.

New technologies must be coordinated among industries—food, packaging, appliance, distribution. Refrigerators or microwave ovens will be equipped to read labels such as RFID and actuate controls or displays.

If nothing else, this conference suggested that perhaps researchers should publish more openly some of their failed testing to give information on directions not to be further explored for applications—or, conversely, to hint at directions to be probed for reasons for the less-than-positive results.