In food processing, some separations are good, and some may be bad. For example, milling of flour relies on separating wheat bran from white flour by screening to produce an important food. On the other hand, settling of pulp from fruit juice is usually undesirable.

Separation by Size: Screening
Screening is used to remove foreign matter, to sort raw materials by size, and to separate components that are mixed together. Screens are made of wire mesh, perforated metal sheets, and woven cloths. Openings may be square, round, or other shapes. Material to be treated is spread on the surface and usually is agitated by moving the screen, sometimes in a circle and sometimes back and forth. The movement is intended to expose each particle to the openings in the screen and eventually to move the "overs," those too large to pass through the openings, off the screen.

Because most food particles are irregular in shape, screening is a statistical process—some fraction of "throughs" or "unders," those which should pass through the screen, are actually retained, and some particles with a relatively large dimension may pass through by presenting a small aspect to the opening. Retention of undersized particles is increased when the load on the screen is high, because there can be a reduced chance that all particles will see an opening and the undersized particles are swept along with the overs. This means that screens should be carefully sized for the anticipated feed rate.

Screens with large openings have higher capacity than those with smaller openings, in part because there is less open area for a given screen surface with smaller openings. Often, several screens are used in series to create a number of fractions. These may each have a use, or some may be recycled for size reduction or, more rarely, agglomeration.

Screening commonly follows a size-reduction step such as hammer milling, crushing, roller milling, or grinding. Most size-reduction processes produce a range of particle sizes, only some of which are desirable. Sometimes the fines are the desired product, and other times an intermediate size is the target. If too great a step is taken in size reduction, as by using a fine screen in a hammer mill, many fines are created. Roller mills can produce a narrower particle size range but will still produce fines, depending on the hardness of the material. It is good practice to use several steps of size reduction with intermediate screening to maximize the yield of desired particle sizes.

Screens may inadvertently contribute to particle size reduction if the feed particles are fragile and the agitation is vigorous. Thus, selection of the screen size, material, and agitation speed are all critical to a screening process. Agglomerates or granules formed by attaching small particles together in a fluidized bed dryer can be shaken apart on a screen if the speed is not controlled carefully.

Separation by Gravity: Settling and Centrifugation
Particles suspended in a liquid may rise or fall, depending on their density relative to the liquid. As the particles move through a liquid, their velocity is affected by the drag or frictional force exerted by the liquid. The rate of settling (or rising, when the particle is less dense than the liquid) is directly proportional to the square of the diameter of the particle and inversely proportional to the viscosity of the liquid. This relationship says that large particles settle much faster than small ones and that thick or viscous fluids suspend particles better than thin or less-viscous liquids.

The amount of pulp can be controlled either by allowing it to settle or by centrifugation. In centrifugation, a suspension is rotated very rapidly in a cylinder or chamber so that the force exerted on the particles is greatly increased, up to several thousand times the force of gravity. In one type of centrifuge, a disk-stack, many thin conical plates are rotated in a chamber. The fluid flows in the spaces between the plates. A particle only needs to travel a short distance before encountering a plate and being diverted to the edge of the chamber. The clear fluid exits from the center of the machine, and the concentrated pulp exits from the perimeter.

Pulp removed from some citrus juices may be added to other juices, permitting the marketing of juices with "less pulp," "some pulp," and "more pulp."

Centrifuges may also be used to remove oil from water, fine particles from water, and protein from fat in rendering.

Even with pasteurization, suspended pulp in fruit and vegetable juices may settle on standing. One solution is simply to advise the consumer to shake well before using. Another is to reduce the particle size of the pulp, often by homogenization, high-pressure shearing. Where permitted, gums and hydrocolloids with juices is good practice.

Good sanitation can help, especially in climates where there is dust in the air. It is possible that dust can act as a clarifying agent, by helping pulp particles collect together and form larger particles that then settle more quickly. Filtering the air that comes in contact with juices is good practice.

When clarity of liquids is desired, fining agents, such as clay, egg white, or gelatin might be added to help particles that form haze agglomerate and then settle. Beer, wine, drinking water, and clear juices are made this way.

Separation by Filtering
Filtering can accelerate removal of suspended particles from liquids. In clarifying fluids, precoat filters may be used, in which an inert solid such as diatomaceous earth, cellulose fiber, or rice hulls might be added to create a filter cake. In other filter applications, especially where the solid is the desired product, plate-and-frame or pressure filters are used. 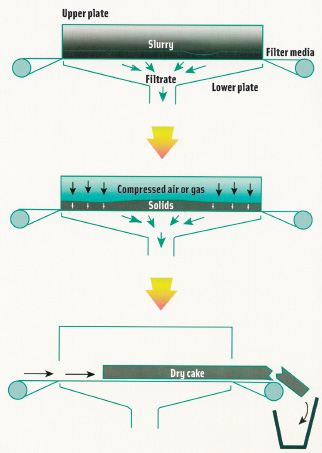 An interesting form of horizontal pressure filter is offered by Pneumapress Filter Corp, Richmond, Calif., according to Tony Miller, Engineering Manager (phone 510-232-2653x215, www.pneumapress.com). Many leaf filters rely on the pressure of the feed fluid or mechanical pressure to compress the solids in the filter cake. Pneumapress uses compressed air to displace liquid from the filter cake and to help dry the cake. Each chamber of the press has a filter cloth that is conveyed into place automatically. When the press is opened after a cycle in which the chambers are filled with slurry and then the cake collected, the cloth conveys the cake to a collection point. The cloth is simultaneously cleaned as it is replaced in the chamber.

The press is not thought suitable for juice expression because the air could cause oxidation, but it is widely used in starch production from corn and potatoes, where efficiency of cake washing is valued.

Other types of filters include rotary vacuum filters, membrane filters, and cartridge filters, often using disposable elements. Rotary vacuum filters use a perforated drum covered with a porous cloth on which a filter aid might or might not be deposited. One food application is recovery of sugar from candy waste, where various candies are dissolved in hot water, mixed with activated carbon to remove color and flavors, and then filtered. The carbon is discarded, and the sugar solution is concentrated and reused.

A plate-and-frame filter press is used in chocolate processing. Ground cocoa nibs are pumped into the press, a collection of chambers covered with a heavy cloth (like canvas) on a sturdy frame, and liquid cocoa butter passes through the cloth while cocoa is retained in the chamber. In a labor-intensive sequence, the press is opened by releasing the hydraulic cylinders holding it closed, and the cocoa cake is dropped into a screw conveyor. The cocoa is ground and may be further treated with alkali to modify color and flavor.

Opportunity Remains
Many filters have high maintenance costs because they have multiple moving parts, are subject to high pressures, often are subject to abrasive and corrosive materials, and are frequently assembled and disassembled because they are used in batch operations. Thus, even though filtration is a relatively mature technology, there continues to be opportunity for improved designs.