Metals and other elements in food can have both beneficial and deleterious effects on human health. Mercury has deleterious effects. In any of its forms, particularly the organic compound methylmercury, it is a potent neurotoxin. 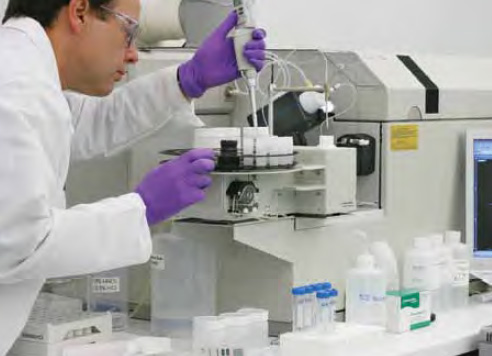 Fish and shellfish provide various health benefits for the fetus, infants, and adults—they provide protein and other essential nutrients, are low in saturated fat, and contain beneficial omega-3 fatty acids. However, fish and shellfish absorb and accumulate methylmercury in their tissues, and certain fish, primarily predator fish such as shark and swordfish, contain higher levels.

Risk/Benefit Assessments
Concern about the presence of mercury, specifically methylmercury, in seafood led the Food and Drug Administration and the Environmental Protection Agency to issue advice to consumers concerning the consumption of fish and shellfish. The advisory (www.cfsan.fda.gov/~dms/admehg3.html) was most recently revised in 2004. It recommended that women who may become pregnant, pregnant women, nursing mothers, and young children avoid some types of fish and eat fish and shellfish that are lower in methylmercury. FDA has established an action level of 1 ppm methylmercury in the edible portions of fish, shellfish, crustaceans, and other aquatic animals (fresh, frozen, or processed).

In a Federal Register notice in January 2009 (www.fda.gov/Food/FoodSafety/Product-SpecificInformation/Seafood/FoodbornePathogensContaminants/Methylmercury/ucm088758.htm), FDA announced the availability of a draft risk/benefit assessment of the effect of fish consumption on fetal neurodevelopment and on coronary heart disease and stroke in the general population, effects which have been associated in the scientific literature with methylmercury exposure, primarily through fish consumption. The agency said that the availability of the document does not modify the 2004 recommendations. FDA asked for public comment to be submitted by April 21, 2009, and is currently reviewing the responses.

The Institute of Food Technologists recently published an Expert Report on risk/benefit assessment. The report, “Making Decisions About the Risks of Chemicals in Foods with Limited Scientific Information,” appears in the Comprehensive Reviews in Food Science and Food Safety section of Journal of Food Science, Vol. 8, Issue 3 (www3.interscience.wiley.com/cgi-bin/fulltext/122445570/PDFSTART), and a summary version appears in the July 2009 issue of Food Technology. The report includes a section discussing the nutritional benefits of seafood consumption in conjunction with the adverse effects of methylmercury, as an example of risk/benefit assessment.

Monitoring the Diet
FDA has conducted a Total Diet Study (TDS) since the 1960s to monitor the impact on the American diet of changes in agricultural practices, new food processing technology or manufacturing processes, the introduction of different methods of food packaging, changes in environmental contamination, or single occurrences of accidental food contamination. A “market basket” of foods is collected and analyzed four times each year to determine levels of contaminants and nutrients in the food supply. The current program analyzes about 280 different foods for elements, pesticide residues, industrial chemicals, and radionuclides.

In a summary of TDS analytical results from mid-1991 through 2005 (www.cfsan.fda.gov/~comm/tds-toc.html), total mercury was found at a mean level of 0.163 mg/kg in tuna canned in oil, 0.003 mg/kg in heated frozen fish sticks, and 0.030 mg/kg in baked fresh or frozen salmon steaks or filets.

According to Oakes, both systems analyze for mercury but differ in sample preparation. For the flow injection system, his laboratory uses a block digestion system to prepare the food samples, which can take up to a week. In contrast, the direct mercury analyzer requires no digestion, and sample preparation takes only a few minutes. Thus, the flow injection system can take up to a week to process 20 samples, he said, while the direct mercury analyzer can process 20 samples in about an hour. Both systems measure total mercury, since all forms of mercury are reduced to elemental mercury during analysis.

The two systems don’t differentiate between elemental and other forms of mercury, Oakes said, but new advances such as inductively coupled plasma mass spectrometry can; this is referred to as speciation. Being able to speciate methylmercury, for example, will allow better risk assessment of mercury in fish products, he said.

Oakes believes that use of ICPMS for characterization of species of mercury and arsenic is the wave of the future. He considers it the biggest advance he’s seen in the 25 years he’s been involved in metals analysis, and it’s only in its infancy.

FDA Research Projects
Steve Capar ([email protected]), Chief of Chemical Contaminants Branch at FDA’s Center for Food Safety and Applied Nutrition, said that CFSAN scientists are continually working to improve the methods they use to analyze foods and dietary supplements. Among the projects in FDA’s 2008 Intramural Research Initiative are several designed to improve methods for analysis of trace elements in foods and dietary supplements for use by FDA’s laboratories.

• ICPMS. Chemist Bill Mindak ([email protected]) is working on using inductively coupled plasma mass spectrometry (ICPMS) to measure arsenic, cadmium, lead, and mercury. He said that with this technique, the sample is first acid digested and the resulting solution is pumped through a nebulizer to form an aerosol, which is then transported into an argon plasma that heats the elements to extremely high temperatures. Ions are generated and transferred into a mass spectrometer to identify the ions. ICPMS is a multi-element technique, he said, able to analyze for many (>70) elements at a time, as well as multiple isotopes, whereas atomic absorption spectrometry is a single-entity method.

Mindak said that the Kansas City lab uses cold vapor atomic absorption spectrometry (CVAAS), a single-element technique. CFSAN is interested in eventually replacing it with a multi-element technique such as ICPMS. That would require use of more-expensive and -complicated equipment that requires more-extensive training, he said, but would provide the opportunity to be more efficient.

He is working on optimizing the instrumental conditions to analyze all four metals simultaneously. One challenge with mercury, he said, is getting it into solution. He dissolves the sample in acid (acid digestion) to break down the matrix. It is important not to lose any mercury, which is volatile.

Mindak is working first on dietary supplements, then expects to expand his work to foods next year. Although there are analytical challenges in the determinative step, he said, there are also challenges in sample preparation—there is such a vast variety of dietary supplement forms that sample preparation is not trivial, and that applies to foods, as well.

• INAA. Research Chemist Dave Anderson ([email protected]) is developing a method using instrumental neutron activation analysis (INAA) as a confirmatory method for measuring the level of mercury in food. The method, which can be used for multi-element analysis of foods, is being developed primarily for quality assurance purposes, to validate FDA’s routine field methods for the TDS. It will not replace routine methods, he said, but because it is a truly independent technique it is an ideal QA tool.

INAA involves placing samples in a low-energy (“thermal”) neutron field to make them radioactive. Gamma rays emitted from the sample have unique energies, depending on the element, and are emitted with intensities proportional to that element’s concentration. High-resolution energy-selective detectors are used to measure the gamma-ray intensities. With proper standardization—typically attained by analyzing prepared single- or multi-element standards—quantitative results can be obtained for up to 30 elements. With pre- or post-irradiation chemistry, speciation studies could be performed, but that is not part of this project.

Since high levels of NaCl in foods lead to high limits of detection for other elements because of spectral background interferences, he is developing a procedure involving background suppression (Compton suppression) to improve INAA’s capabilities.

Mercury poses certain problems for INAA, Anderson said, particularly losses during irradiation because of hot-atom reactions and volatilization due to heating. Typically, this is dealt with by sealing the portions in quartz vials, a cumbersome and time-consuming procedure. Anderson is working on stabilizing the mercury in food matrices prior to irradiation by adding L-cysteine, thus simplifying the analytical process and allowing higher sample throughput. He expects to complete the project by next March.

He has demonstrated that addition of L-cysteine to prepared inorganic mercury standards prevents loss of that element, whereas losses of up to about 60% occur without treatment. He has also shown that the treatment prevents mercury losses from dried certified reference materials that contain mostly organic mercury species. He is now working to stabilize fresh-frozen fish matrices.

The main challenge he is dealing with concerns drying the matrix in preparation for neutron irradiation to avoid overheating during irradiation. There is contradictory evidence as to whether mercury loss occurs during thermal-, microwave-, and freeze-drying procedures, he said, and he will address the freeze-drying issue in future work.

• Reference Material. Research Chemist/Regulatory Review Scientist William (Bill) Cunningham ([email protected]) has developed a reference material that contains mercury and nine other elements at levels relevant to FDA’s monitoring activities in foods to provide an added resource that Kansas City and other FDA labs can use to help confirm the quality of analytical results. The reference material is prepared from swordfish, which typically contains organic mercury, and is spiked with inorganic mercury and other elements.

He’ll send the reference material to Kansas City and other FDA labs within the next few months, and they’ll send data to him. Initial results will be available soon.

• Challenges. Among the challenges ahead, Capar said, is validating the direct mercury analyzer. The analyzer requires no sample digestion, he said, but his group is working to be sure that the results are accurate and precise. It’s especially good for screening seafood, he added, but we also want to use it for other foods.

Another Mercury Concern
Earlier this year, a paper in Environmental Health (www.ehjournal.net/content/8/1/2) reported that a study conducted in 2005 found mercury in 9 out of 20 commercial samples of high-fructose corn syrup from three manufacturers at levels of 0.005–0.570 mg/g. The authors said that several chemicals are required to make HFCS, among them caustic soda and hydrochloric acid, certain forms of which may contain mercury. A subsequent study (www.healthobservatory.org/library.cfm?refid=105026) conducted by the Institute for Agriculture and Trade Policy found detectable levels of mercury in 17 out of 55 tested food products containing HFCS.

The Corn Refiners Association (CRA) challenged the relevance of the Environmental Health study, stating that industry has used mercury-free versions of the two reagents mentioned in the study—hydrochloric acid and caustic soda—for several years. CRA commissioned independent testing and expert review that disputed the results of the two studies. The independent testing and review concluded that no quantifiable mercury was detected in any of the samples analyzed and HFCS does not appear to be a measurable contributor to mercury in foods. Details are available at www.corn.org/mercury-hfcs.html.

Major Suppliers of Instruments for Analysis of Mercury in Foods