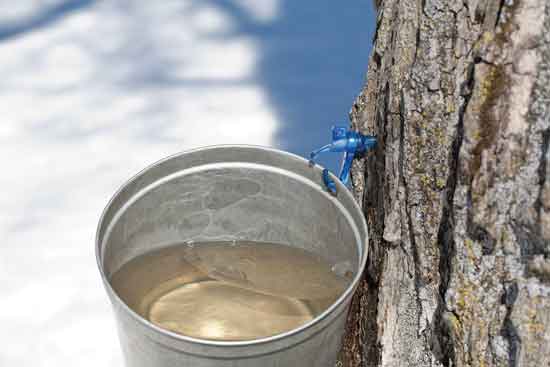 Evaporation is the removal of water from a solution by applying heat, usually for the purpose of concentrating the solution. It also produces pure water, in which case, if the water is the objective, it is called distillation.

The Basics
In its simplest manifestation, evaporation of sap from maple trees or of juice pressed from sweet sorghum is conducted in open shallow pans over a wood fire. An improvement to this process is the addition of baffles so that the fluid flows in a path across the pan as it thickens, rather than having a single large pool boiling away. Maple syrup and sorghum syrup are artisanal sweeteners still made in mostly rural areas. Maple syrup requires 33 gallons of typical sap to produce a gallon of syrup. Sorghum juice is more concentrated to start, so less water must be removed, but it also contains chlorophyll and other impurities that must be laboriously skimmed to give a relatively clear product. Another sweetener, cane syrup, is made in a similar way from sugar cane juice. This should not be confused with molasses, which is a less sweet byproduct of sugar refining.

Some classic and recurring issues in evaporation are illustrated by these simple examples. As solutions become concentrated, their boiling point increases and so the temperature they experience increases. An estimate of the boiling point increase for water solutions is about 0.5°C for each mole increase in concentration per liter. This is more significant for low molecular weight solutes.

As solutions become concentrated, they typically become more viscous, which affects their flow properties and heat transfer coefficients. They also lose volume. The net effect is an increased risk of scorching the fluid and fouling of the heat transfer surface. In batch evaporation, as the surface becomes fouled, the temptation is to increase the heat source temperature, if possible. This has the counter intuitive effect of increasing the fouling rate.

For most foods, exposure to high temperatures causes undesirable changes in flavor, color, and nutrient content. A partial exception is maple syrup, which requires heating to develop its characteristic flavor, though too much heat darkens the product. To reduce thermal damage, it is common to operate evaporators under vacuum, lowering the boiling point while increasing the temperature, driving force for heat transfer.

Energy Savings
The heat of vaporization of water is about 1,000 BTU/lb, so this same amount of heat must be supplied for every pound of water removed. Actually, efficiencies of heat transfer are about 80%, so even more energy is required. The vapor exhausted from the boiling liquid carries with it about the same energy content. An obvious improvement is to use that vapor to heat another portion of boiling liquid. This is accomplished in a multi-effect evaporator, at increased capital cost.

A multi-effect evaporator consists of several heat exchangers and vapor liquid separators connected in series so that the vapor from one effect heats the next one. This requires that each effect be at a lower pressure so that the liquid and vapor can flow from one to the other and so that the boiling point of the liquid in a following effect is lower than the temperature of the vapor being supplied to it. There can be as many as seven effects in some large evaporators.

There is a diminishing return as effects are added because of various unavoidable inefficiencies, such as the lost heat in concentrate streams. However, the impact of as many as 20 effects can be achieved in a mechanical vapor recompression evaporator.

In a mechanical vapor recompression evaporator, a special compressor captures the vapor and compresses it to a high enough pressure that it can be used in one heat exchanger. The capital investment effectively trades multiple heat exchangers and vessels for a compressor. It also substitutes electrical power for steam. Such evaporators are common in the tomato industry.

Heat Transfer
Especially for fouling and thermally sensitive feeds, much effort is applied to design of heat transfer equipment for high heat transfer rate, short residence time, ease of fabrication, ease of maintenance, and ease of cleaning. Some common examples include falling films in vertical tubes, rising films in vertical tubes, forced circulation through vertical or horizontal tubes or coils, wiped films, and plate heat exchangers. One special evaporator uses a rotating helical coil submerged in a pool of boiling liquid with steam inside the coil. The idea was to create a high velocity at the surface to reduce fouling of tomato paste.

In multi-effect evaporators, the heat exchangers may be the same size or different. Usually the heat load and water removal rate distribute themselves more or less equally among the effects, depending on the changes in heat transfer coefficient with concentration.

Applications of Evaporation
One of the largest applications of evaporation for foods is to make juice concentrates. In this application, the proprietary T.A.S.T.E. evaporator offered by JBT Corp. (www.jbtfoodtech.com) is popular. The name stands for thermally accelerated short time evaporator. It is a multi-effect, falling film, tubular device with as many as seven effects. Orange juice concentration is probably its largest use.

Sugar is another product that relies on evaporation. Cane juice is concentrated to its saturation point, clarified to remove color and other impurities and then cooled enough to cause crystallization of the sugar. Crystals are separated from the mother liquor, called molasses, in basket centrifuges. The molasses may be concentrated further to remove as much sugar as possible, and the crystals are re-dissolved, concentrated, and crystallized several times before pure sugar is produced. Sugar beets and sorghum are also sources of sugar using a similar process, though sugar beets are extracted with hot water to produce the feed for evaporation. Molasses from beets is bitter and not used for human consumption.

Cane sugar is less expensive to produce than beet sugar because the bagasse (pressed cane) is burned to generate the energy needed to run the sugar mill, while exhausted beet pulp is fed to cattle. The choice of a sugar source depends on climate. Cane grows in tropical climates while beets are a cold-weather crop.

Evaporation of sea water or waste water to produce pure water by evaporation is practical where energy is inexpensive. It is used in the Persian Gulf area where water is scarce and combustible gas from oil production is often wasted. Corrosion by the concentrated salt solution is a serious issue, as is scaling by calcium and magnesium salts that are precipitated at high temperatures. Membrane concentration is more practical than thermal evaporation to produce pure water in most situations.

Stick water from rendering is concentrated to produce meat flavors and to avoid discharge of a strong waste. Likewise, gelatin solutions from long, slow extraction of cow and pig hides are concentrated by evaporation.

Normally, it is intended that concentrates of foods retain as much flavor as possible. Evaporation often removes volatile flavors, such as those in fruits. Processes have been developed to recover the first vapors, where most of the flavors are found, and concentrate these to essences that can be added back. This has been applied to coffee concentration as well as orange juice.

Recently there have arisen situations where flavor retention is not desirable. An example is the concentration of sweet potato juice to a sweet ingredient that can be labeled as sweet potato, replacing corn syrup or sugar. Likewise, other vegetable juices may be concentrated for their color or other properties, but not for their flavor. In these cases, a combination of membrane concentration and thermal evaporation may yield the desired product.

Farewell from Peter Clark
After more than 12 years—since March 2002—this is my last regular processing column. I will continue to write the IFT Annual Meeting preview and Food Expo review for at least a while. The very able Dr. Tara McHugh, research leader at the USDA Western Regional Research Center in Berkeley, Calif., is my successor. Tara was a graduate student at the University of California-Davis working under the direction of Professor John Krochta when I first met her. Coincidently, both John and I began our careers at the same center.

It has been a rare privilege and wonderful learning experience for me to write this column over these years. I am grateful to Neil Mermelstein, Roy Hlavacek, Jerry Bowman, Bob Swientek, and Mary Ellen Kuhn for recruiting me and then being tolerant and supportive editors. I also greatly appreciate you, my readers, especially my fellow food engineers, who have used some of these pieces in teaching. We writers do not usually get much feedback, so when we do, it is pretty special. So thanks especially to all those over the years who have recognized me on the IFT Food Expo floor and exchanged greetings. I wish Tara the same satisfaction and support I have received.